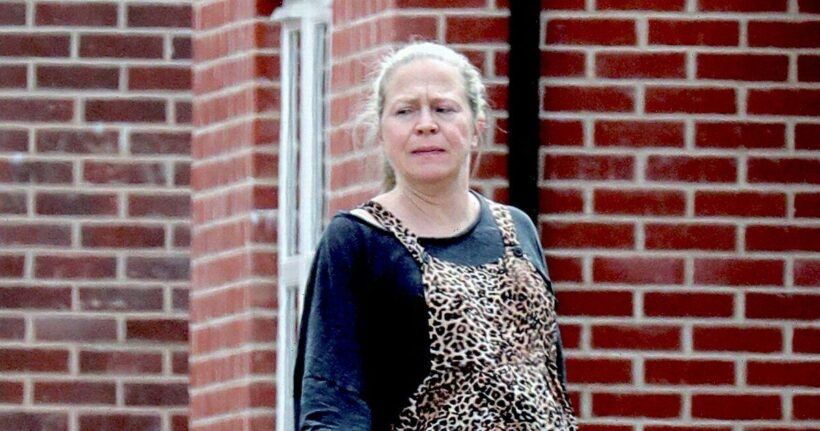 Kellie Bright nailed her off-duty maternity style as she enjoyed a low-key outing on Tuesday.

The 44 year old, who is well known for her portrayal of Linda Carter on popular soap EastEnders, highlighted her blossoming bump with a pair of stylish leopard print dungarees, which she wore over a black top.

Kellie kept things casual as she went make-up free while styling her long blonde locks in a simple ponytail.

With her due date nearly approaching, the soap star, who announced her third pregnancy exclusively with OK! magazine, looked happy and relaxed as she continued on about her day.

Kellie revealed she was pregnant with her third child through frozen embryo insertion back In March.

In an interview with OK!, she warned that IVF isn't "magic" as she discussed her journey to getting pregnant with her third child with husband, Paul Stocker.

They are already parents to sons Freddie, nine, and Gene, four.

When asked if she would have stopped trying for more children if Gene was conceived naturally, Kellie explained: "I think so, yes. But I knew when we had those frozen embryos, we had to give it a go. My friend said I'm a trailblazer! But I'm not.

"My risks would've been much higher if I'd had IVF from scratch now.

"I don't want women seeing people like me having babies in my forties and thinking, 'Oh, if they can do it, I have loads of time!' It might be OK… but it might not.

"I hate the term 'geriatric mother' for pregnancies over 35, but there's a reason for the label. I don't want to be seen as a woman with a magic womb."

Kellie had two embryos implanted before she fell pregnant with the third.

She revealed: "The first two embryos didn't work. So this baby inside me now was the last one we had – the last chance of a pregnancy, because at 44 we were not going through IVF again.

"I believe it was meant to be. But those three months, between September and November, were a real roller-coaster."

For more updates on Kellie Bright, sign up for OK!'s daily newsletter here.