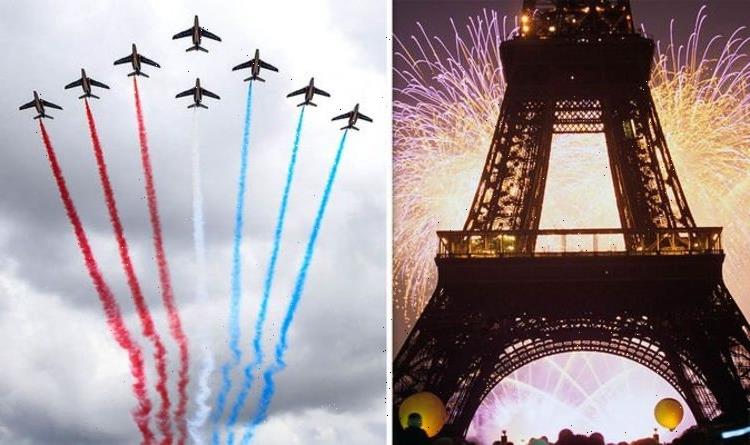 Bastille Day is a hugely important national holiday for French citizens. The festival occasion brings people together in France. The day is referred to as la Fête Nationale or the National Holiday, or more colloquially called le Quatorze Juillet. Bastille Day is a term seldom used by non-tourists.

What is Bastille Day and why is it celebrated?

Bastille Day, referred to as Quatorze Juillet, in France is the country’s national day.

The holiday is not really about the storming of the Bastille as the name may indicate, but it does offer interesting insight into how the English-speaking world imagines France’s revolutionary history.

Bastille Day is celebrated each year on July 14 – recognising the anniversary of the storming of the Bastille on July 14, 1789.

In 1789, Parisian people attacked the Bastille which was a political prison and a symbol of monarchy and an armoury.

The prison was a medieval fortress which included a 30-metre high wall, a broad parapet and a moat.

Citizens attempted to seize weapons, ammunition and powder to fight the royal troops stationed in the vicinity of Paris.

Only seven prisoners were in residence when the storming of the Bastille took place – but despite this, the mob’s actions ignited the revolution which would set up the principled French Republic.

Another important origin for Bastille Day is the Fête de la Fédération of 1790.

This 18th-century French holiday festival was designed to inaugurate a new era without absolutism and with a new French constitutional monarch.

The national holiday was first held the year after the Bastille fell when the political unrest in the country had started to cool off.

Officials in France organised the festival to debut on the anniversary of the Storming of the Bastille.

French citizens marked the day with a feast and found a means to calmly involve the French King Louis XVI.

How is Bastille Day celebrated?

The national holiday is a day intended for leisurely family activities and celebrations.

Lavish military parades are held displaying French power on the Champs-Elysees with fireworks and popular dances taking place across the country in the evening.

Last year, the coronavirus pandemic impacted celebrations, but this year more Covid-secure celebrations have been arranged to enable citizens to celebrate the special occasion.

The Bastille Day military parade was cancelled in 2020 for the first time since World War II and instead, a smaller ceremony was held at Place de la Concorde.

Spectators will be required to show a health pass including proof of vaccination, a recent negative test or proof of recent recovery from coronavirus to attend.

In addition, all spectators must wear a face mask at the event.

An airshow will see planes take to the skies to paint with the colours of the French flag from 10.30am.

The best views of the airshow are expected to be visible from the Grande Arche de la Defense.

Celebrations will also be commemorated with a classical music concert on the Champ-de-Mars at the foot of the Eiffel Tower.

Several towns across France have opted to cancel their fireworks displays for the second year running.

However, local authorities in Paris confirm its show would go ahead on Sunday.

Spectators in Paris will have to wear a mask if they want to gather to watch the fireworks nearby.