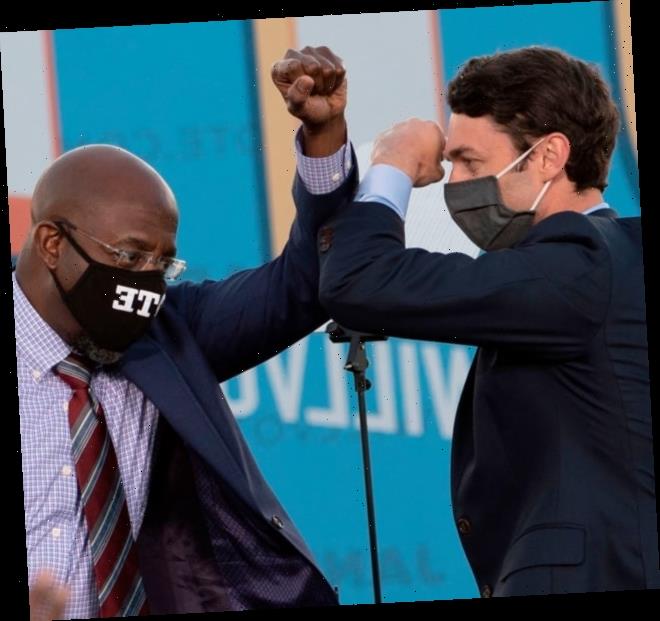 And also: A brand new and very blue Georgia.

These were among the reactions across the country late Tuesday night and early Wednesday morning after Democrats Raphael Warnock and Jon Ossoff won their special Senate run-off elections against Kelly Loeffler and David Perdue, respectively.

(To be clear, Warnock has been declared the winner by The Associated Press, while Ossoff is expected to be named the official victor later today.)

Due to these victories, there are now 50 Republicans and 50 Democrats in the United States Senate.

In the event of a tie on any vote, Vice President Kamala Harris will be the deciding voice for the next two years.

These were tremendous, impactful wins for the Democratic party and for President-Elect Joe Biden, who should now have a somewhat easier time passing aspects of his forthcoming agenda.

“Tonight, we proved that with hope, hard work, and the people by our side, anything is possible,” Warnock said on Tuesday in response to his accomplishment.

Because Loeffler is an awful human being who is blindly loyal to President Donald Trump, she has not conceded… addressing supporters in a speech overnight by stating:

“We have a path to victory, and we’re staying on it.”

Loeffler, it needs to be noted, does not have a path to victory.

But President Trump does not have a path to a second term, either, and that hasn’t stopped him from whining about election fraud and issuing meaningless protestations on Twitter.

In order to remain relevant, to fire up his ignorant base and to maintain his own ego, Trump responded to these Georgia run-off results by once again crying foul.

“Just happened to have found another 4000 ballots from Fulton County. Here we go!” the Commander-in-Chief Tweeted at one point.

“Looks like they are setting up a big “voter dump” against the Republican candidates. Waiting to see how many votes they need?”

Yes, either this is what happened.

Or… as has been the case in every election since America became a nation, some counties need extra time to process their votes and state-wide results often take hours to fully come in.

Ossoff currently holds a slim lead over Perdue, but:

“The outstanding vote is squarely in parts of the state where Jon’s performance has been dominant,” said Mr. Ossoff’s campaign manager, Ellen Foster, early Wednesday.

The Perdue campaign, conversely, issued a statement after 2 a.m. also predicting victory, while calling for “time and transparency.”

The statement suggested that the campaign expected to soon fall behind in the balloting as it promised to “mobilize every available resource and exhaust every legal recourse to ensure all legally cast ballots are properly counted.”

However, even veteran Republican operatives understand the race is over.

And that the party they were once proudly a part of has fallen apart, as well.

“Suburbs, my friends, the suburbs,” said Josh Holmes, a Republican strategist and former chief of staff to Mr. McConnell.

“I feel like a one trick pony but here we are again.

“We went from talking about jobs and the economy to Qanon election conspiracies in 4 short years and — as it turns out — they were listening!”