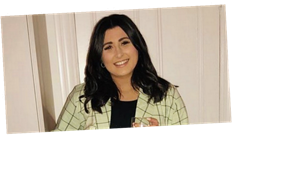 The 24 year old, who is famed for critiquing the week’s top telly with her brother Pete on the Channel 4 show, shared the happy news with Gogglebox viewers on Friday.

Sophie lost her job as a window dresser for Debenhams in December, after the company went into liquidation and was forced to close all its stores across the UK.

Months on, Sophie has revealed she’s got herself another job, which takes her on a different career path.

Sophie revealed on Friday 12 March’s show that she is training to become a florist.

As viewers were taken to Sophie and Pete’s home in Blackpool Sophie’s brother Pete, who recently got engaged, could be heard saying: “I wondered was that was in the kitchen.”

To which Sophie explained: “It’s my new floristry kit for my floristry course. I’ll get my gloves on!”

As she tried on her new pink and white gloves Pete said: “They’re golfing gloves.”

“They’re not golfing gloves, they’re [for] floristry,” Sophie explained as she held out her hand for Pete to inspect the new gear.

Pete asked: “Why have you got gloves?” To which Sophie explained: “Because, when it’s cold conditioning the flowers, when you’re pulling the leaves off, you need a bit of protection on the hands.”

Sophie’s sibling couldn’t help but make a cheeky joke as he then quipped: “Well, if you’re dealing with roses you’re used to dealing with little p***ks, aren’t you?”

The brother and sister were then seen giggling before moving on the discuss the TV highlights.

It comes after Sophie revealed she had lost her job at Debenhams in December, after the company went under.

Despite the difficult announcement, she remained positive as she shared a photo of herself cheering while outside a Debenhams store with a colleague.

Sophie told her followers in the caption: “We might be going but we are going with a smile,” followed by a pink heart emoji and the hashtag #Debenhams.

Weeks before, Sophie had burst into tears over the pandemic causing job losses.

She became emotional as she sat alongside her brother Pete while they watched Boris Johnson announce there would be a second lockdown across England.

After Pete noticed she was upset, he said: “Don't get upset, kid – don't because you'll set me off.”

Sophie then replied: “It's just sad isn't it. It's just s*** for everybody. It's going to get even worse; more people are going to lose their jobs and things like that. It's just awful.”