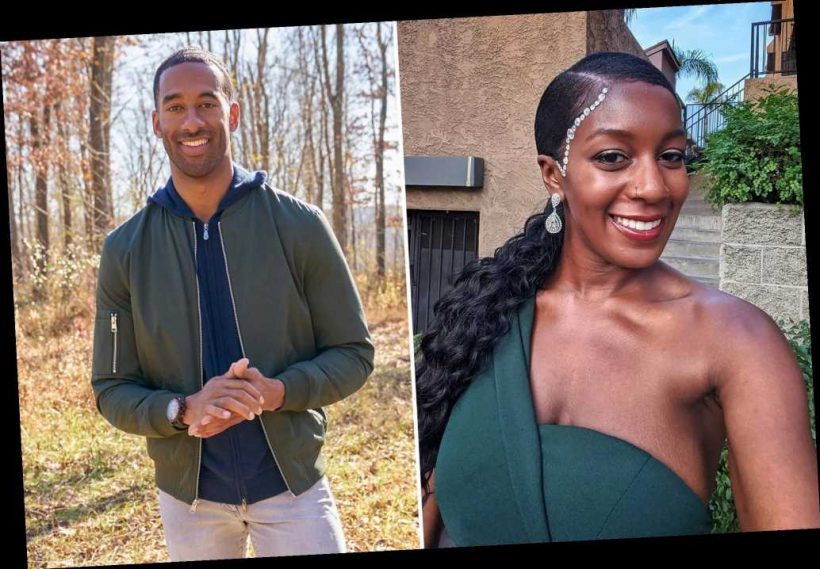 ‘The Bachelor’ recap week 10: Everyone loves Matt — including his dad

‘The Bachelor’ recap: ‘Women Tell All’ was a huge waste of time

Emmanuel Acho tapped to replace Chris Harrison on ‘The Bachelor’

Is ‘The Bachelor’ replacing Chris Harrison with Michael Strahan or Robin Roberts?

Season 25 of “The Bachelor” was supposed to be a celebration of diversity.

Instead, it became one of the most contentious seasons in the franchise’s history, as accusations of racism bubbled up to the surface after years of tension, both on screen and off.

In June, at the height of the Black Lives Matter movement, Matt James was announced as the first black Bachelor in the franchise’s nearly 20-year history. His appointment was lauded as a giant leap for the beloved ABC reality dating show, which had long been criticized for excluding people of color. A bonus: James’ cast of prospective wives would be one of the most diverse ever.

But almost from the season’s start, rumors swirled about contestant Rachael Kirkconnell, as pictures of her attending an Antebellum-themed party circulated online. Longtime host Chris Harrison defended her actions while giving an interview with Rachel Lindsay, who was the franchise’s first black Bachelorette in 2017. Fans and former stars erupted in an uproar: Harrison temporarily stepped down from his post; Kirkconnell apologized.

On Monday night’s finale episode, viewers will see these issues addressed on screen for the first time during the “After the Final Rose” special: Kirkconnell and James will sit down with Emmanuel Acho — a former NFL player-turned-host who was tapped as Harrison’s replacement for the special — for a frank discussion about the issues surrounding the reality show.

But this reckoning is too little too late for Jazzy Collins, a former casting producer on the show.

During the March 8 episode, James, who is biracial, had a deeply uncomfortable conversation with his estranged father, a black man who was largely absent from his life. After the scene aired, James posted to Twitter: “Too often, we see dangerous stereotypes and negative depictions of black fathers in media. And they have consequences when presented without context,” he wrote.

Part of the issue with that particular story line, Collins said, is that James is the first Bachelor to not have appeared on a previous “Bachelorette” season. As a result, viewers have limited knowledge of his character and backstory.

“I feel like it was completely unnecessary and it didn’t add anything,” Collins said.

Collins was hired to work in the casting department for Lindsay’s season in 2017. “I was superexcited. I haven’t had an opportunity to really work on a dating show before so this was kind of like my big break,” she said. As a black woman herself, she was “honored” to work with the first black Bachelorette.

“This is gonna be historic,” she remembered thinking.

As one of the only black employees in casting, which had a staff of around 11 people, Collins, who worked with the franchise for five seasons, felt “pushed” by her supervisors to only deal with the potential contestants of color, though at the time she didn’t think this was a problem.

Lindsay’s season ended up being one of the most diverse casts the show had seen. “I was under the assumption that they’re going to be pitching more diverse people on the show, [and I thought] this is great,” Collins said.

But when it came time to cast the next season of “The Bachelor,” which starred Arie Luyendyk Jr., Collins said things went back to the status quo: Thin, white women remained the “ideal” candidates.

Her supervisors made their priorities clear: “The women needed to be thin,” she said. “It was expressly told to us.” Collins said there was a height maximum for women so they wouldn’t dwarf their potential suitors and a height minimum for men, so they would always seem larger-than-life.

Though there wasn’t a similar mandate when it came to casting black candidates, Collins said she quickly understood the kinds of people her supervisors deemed acceptable: “I would pitch a beautiful woman who had natural hair, she had locks, or she had braids … and they would say, ‘She’s not right for this show,’” claimed Collins. “But if it’s a black woman who came in with her hair straightened, or she’s wearing a weave, they would gravitate towards that.”

A representative for Warner Horizon denied that the show prioritized white contestants and said there were no casting guidelines or directives about appearance.

In a joint statement, Warner Horizon and ABC Entertainment told The Post: “While we recognize our efforts are ongoing, we are dedicated to continuing to foster a diverse and inclusive culture.”

Collins, who published an open letter in June on Instagram calling out her former workplace, said that her colleagues would also “overlook” racist behaviors of candidates online, like that of Lee Garrett, a controversial contestant from Lindsay’s season.

“What’s the difference between the NAACP and the KKK? Wait for it…One has the sense of shame to cover their racist a– faces,” he allegedly tweeted. “I’m sorry for saying things when I was not educated and ignorant in those subjects,” he said in a later apology.

Such vitriol only drummed more interest in the show. “I was told when I was there is any press, even if it’s negative, it’s still good press,” Collins told The Post.

A representative for Warner Horizon denied it ignored such behavior.

“We make every effort to vet potential cast members through extensive background checks and social media screenings,” the representative said. “Those identified with hateful behavior are disqualified.”

Collins says the issues with the franchise weren’t limited to what viewers saw on screen and on social media.

Though she had more experience than her white colleagues, Collins said she was paid less than them, left out of meetings and labeled “aggressive” when she pointed out problems.

“[A black] Emmy-nominated producer applied for the show. And they said, we would have to start you as an associate or on the bottom level,” said Collins. Another former on-set producer corroborated this.

At a Christmas party in 2018, white staffers touched a black employee’s hair, until Collins stepped in to stop them. Her own hair, which she wore in an afro, was constantly commented on, she said.

The Warner Horizon representative said the company had no knowledge of the above incidents and that it had “an equal opportunity policy that applies to all aspects of the employee experience, including compensation.”

Viewers are also begging for change. A group of 13 super-fans have banded together to create the Bachelor Diversity Campaign in an attempt to hold ABC accountable. More than 160,000 people signed a petition asking for more castmates of color.

Collins, calling the show “outdated,” hopes to see a complete overhaul of “The Bachelor.”

“If you want it to move forward with the times to continue to be a success, you need to evolve,” said Collins. “And if they’re not going to evolve, then the show is a joke.”

In its joint statement, Warner Horizon and ABC Entertainment told The Post it hoped to “continue the dialogue around achieving greater equity and inclusion” both on and off screen. “We are dedicated to improving the BIPOC [black, indigenous and other people of color} representation of our crew, including among the executive producer ranks.”

“That’s when I’ll know for sure if they’re actually serious about it.”