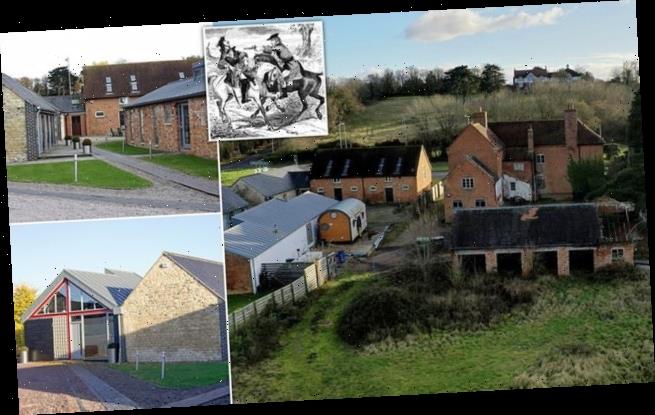 What a steal! Luxury farmhouse in Warwickshire where infamous highwayman Dick Turpin was rumoured to have stashed his ill-gotten gains hits the market for £1.8m

A luxury farmhouse on land where infamous highwayman Dick Turpin is rumoured to have stashed his stolen loot has gone on the market for £1.8million.

The Grade-II listed Harwoods House sits on a sprawling 12 acres of land in Ashorne, Warwickshire and is for sale with Bromwich Hardy estate agents.

The property is being marketed as a ‘first-class investment or development opportunity’ with fascinating links to the rogue highwayman.

The current red brick three-storey building dates back to the late 18th century and comes with nearly 5,000 sq ft of offices and outbuildings.

There has long been speculation that Turpin – who was hanged for his crimes in York in 1739 – hid some of the valuable proceeds of his robberies on land at the farm. 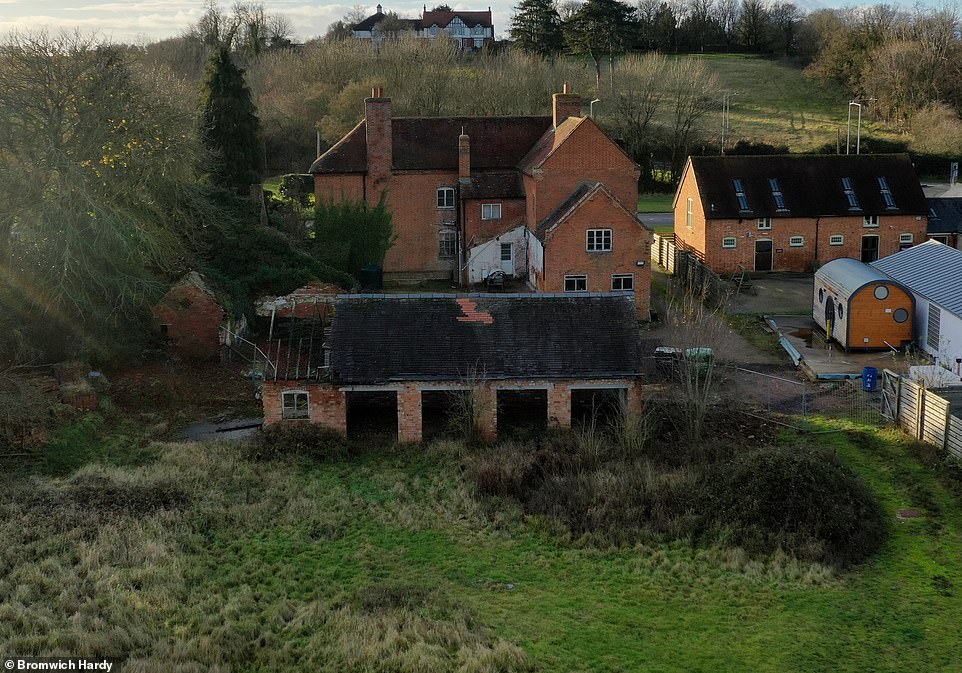 A luxury farmhouse where infamous highwayman Dick Turpin is rumoured to have stashed his stolen loot has gone on the market for £1.8million 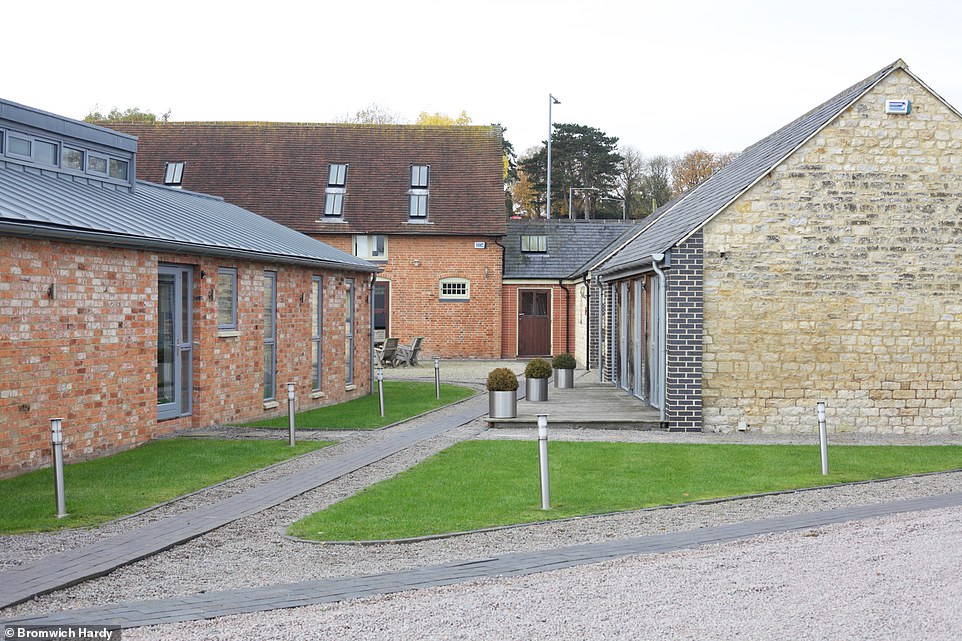 The Grade II-listed property was allegedly used by the notorious stagecoach robber to hide his ill-gotten gains during the 18th century, according to legend. Now house-hunters are being offered to chance to own a piece of English folklore by buying Harwoods House in Ashorne, Warwickshire, which is for sale with Bromwich Hardy estate agents

Turpin was said to have ruled the highways during the 17th and 18th century and would target stagecoaches with rich passengers inside on horseback.

Turpin, who also used the alias John Palmer, was born in September 1705 and initially trained as an apprentice butcher to follow in his father’s footsteps.

But after becoming a member of the violent Gregory gang he found a more profitable career in crime.

Over the years he became a notorious poacher, burglar, horse thief and killer and was finally captured and sentenced to death for his crimes.

His story has long been associated with the Warwickshire area despite traditionally being linked to London and York.

Legend has it that his ghost travels between Nuneaton and Hinkley on a phantom horse near to the deserted medieval village of Stretton Baskerville. 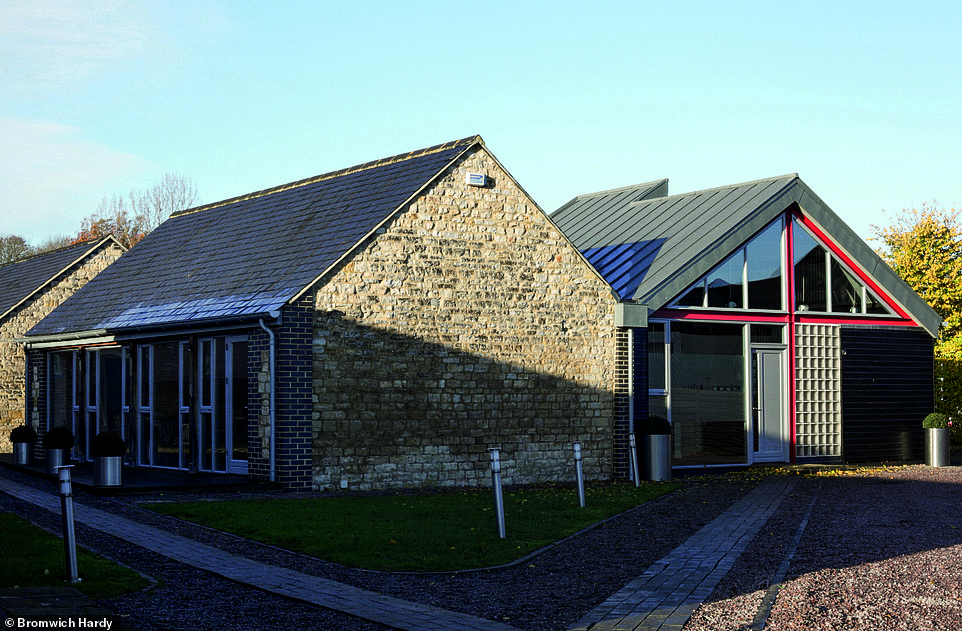 As well as the house, the sale comes with three former barns which were converted into offices in 2007, the estate agent said 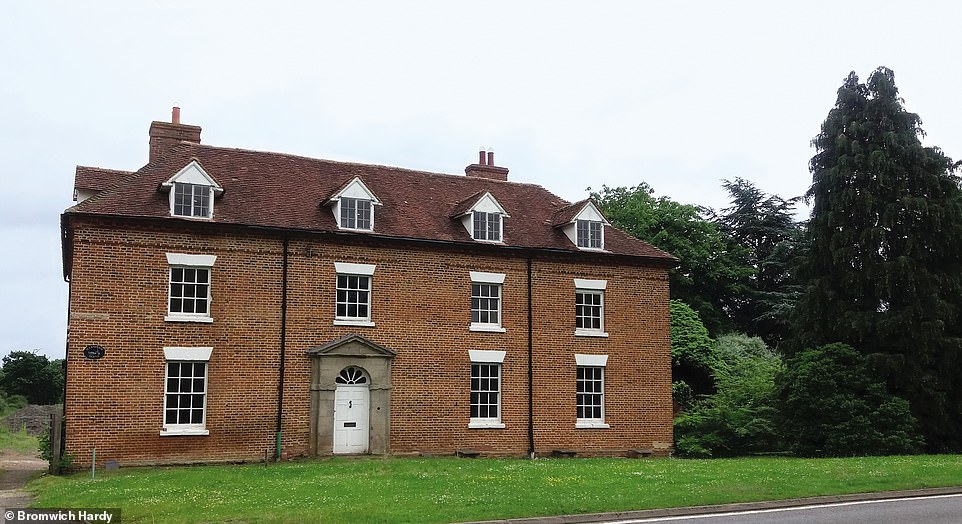 David Penn, a partner at Bromwich Hardy estate agents, said the home itself is an ‘impressive local landmark’ which is in need of ‘sympathetic refurbishment. Pictured: The front of Harwoods House 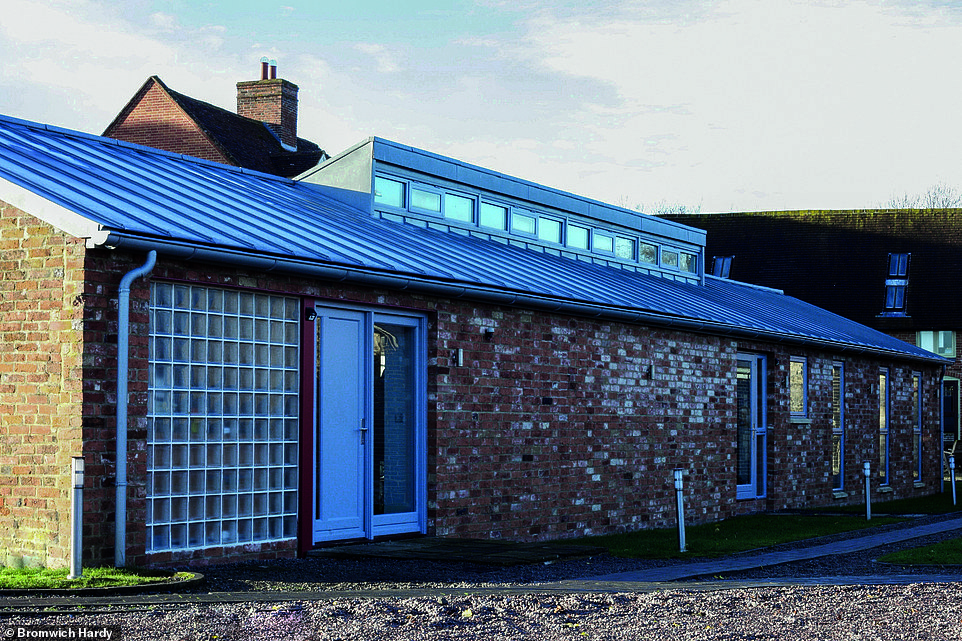 The offices currently generate nearly £90,000 a year but there is also planning permission in place for a further 8,600sq ft of new offices to be built on the farm. Pictured: One of the office buildings which is included in the sale

He is also rumoured to have buried treasure near to Stretton Baskerville and eyewitness accounts from the 1920s describe a ghostly Turpin in a black tricorn hat and a coat with red sleeves.

Turpin is most famous for his ride from London to York on his horse Black Bess in a story written by Victorian novelist William Harrison Ainsworth.

David Penn, a partner at Bromwich Hardy estate agents, which is handling the sale, said: ‘The house, buildings and land stand in a highly prominent landmark position halfway between Warwick and Gaydon just off the M40 in the Warwickshire countryside.

‘It would have made an ideal spot for Turpin to hide his loot as he travelled the country.

‘The house itself is an impressive local landmark which is in need of sympathetic refurbishment, providing a wonderful opportunity for residential or commercial use. 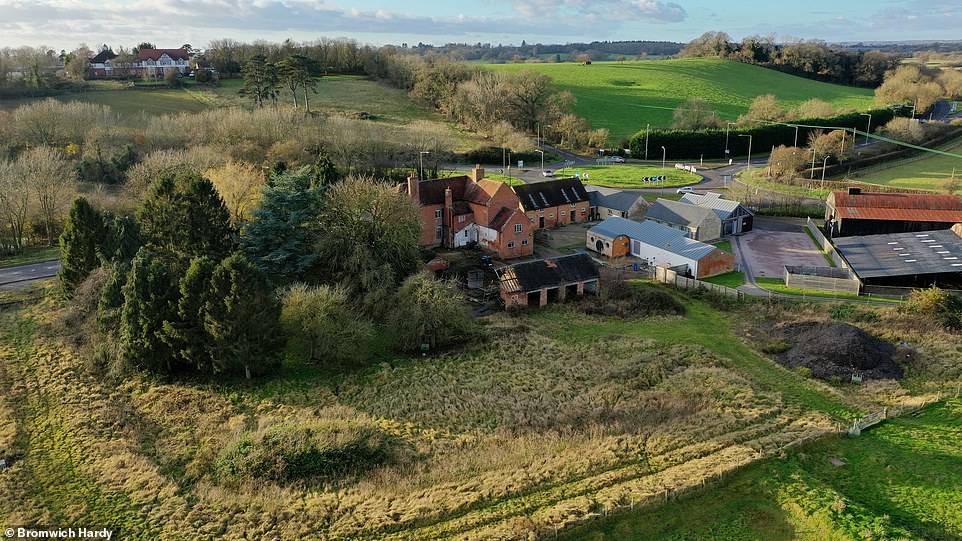 In total, the site is set across 12 acres of land. There is also planning permission to build more new offices behind Harwoods House 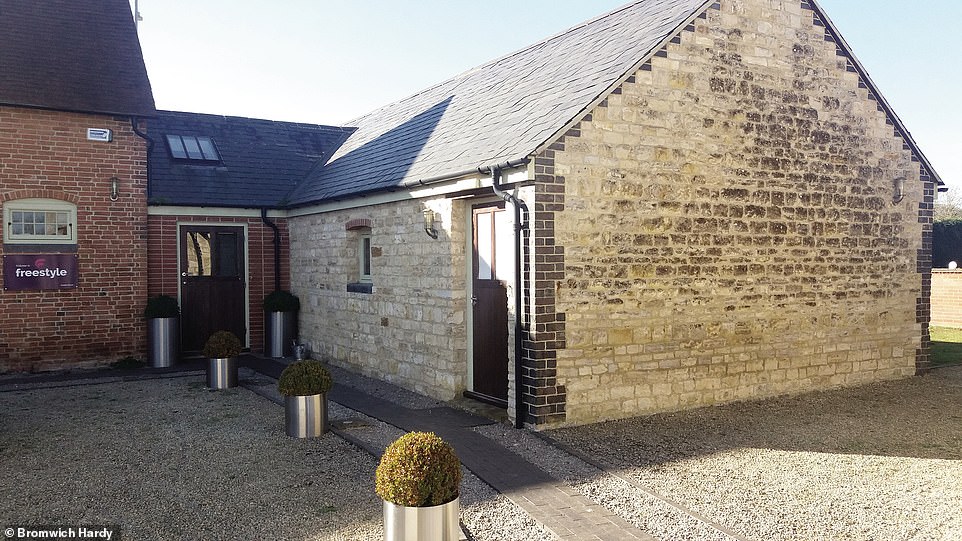 The area is also homes to firms including PSA Peugeot Citroen, Rolls Royce Aerospace, Tata Motors and VivaRail. Pictured: One of the former barns at the property 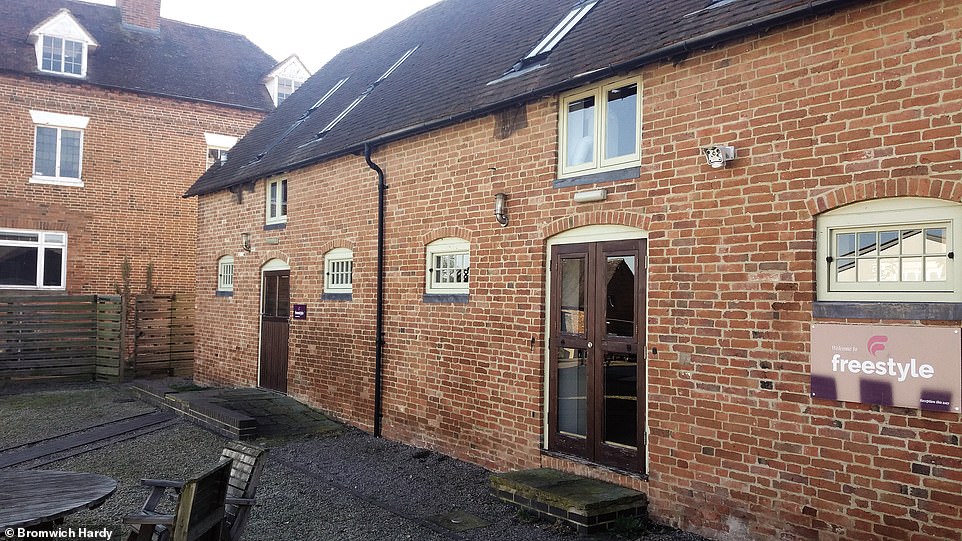 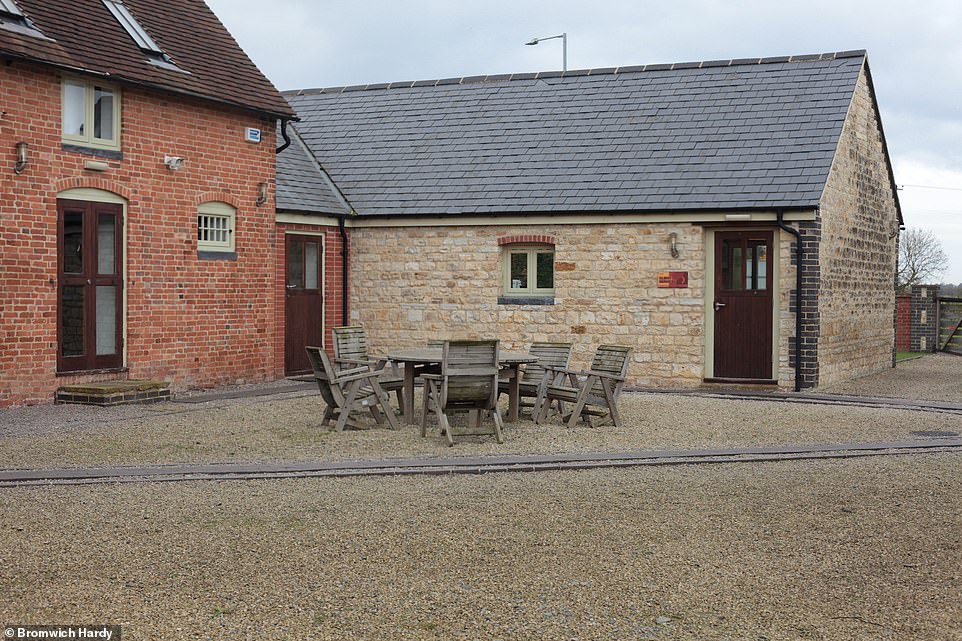 Offers in excess of £1.8million are being accepted on Harwoods House and its accompanying office buildings

‘There are three areas of former barns which were converted to a high standard into offices in 2007 and planning consent for further new-build office construction to the rear of Harwoods House, partly utilising existing buildings.

‘This is the sort of investment and development opportunity which comes along very rarely and we anticipate there being considerable interest in the potential which Harwoods House and its associated buildings offer.

‘The area boasts both Jaguar Land Rover and Aston Martin on the doorstep at Gaydon, as well as the Warwick Technology Park.

‘Coventry and Warwickshire area is at the forefront of technical innovation including creating and developing digital and transport technologies of the future.’

The offices currently generate nearly £90,000 a year but there is also planning permission in place for a further 8,600sq ft of new offices to be built on the farm.

The area is also home to other major employers including PSA Peugeot Citroen, Rolls Royce Aerospace, Tata Motors and VivaRail.

Dick Turpin: The highwayman who became a figure of legend after he was executed for stealing horses

By Chris Brooke for the Daily Mail

Dick Turpin, who was born in 1705, was the son of a butcher and inn keeper who became a member of a vicious gang of robbers.

The gang targeted isolated farmhouses across the home counties, terrorising and torturing the occupants into handing over money and other valuables.

Many members of the gang were caught and hanged in 1735 but Turpin, who by then had a large bounty on his head, turned to highway robbery, eventually teaming up with another renowned highwayman – ‘Captain Tom King’. 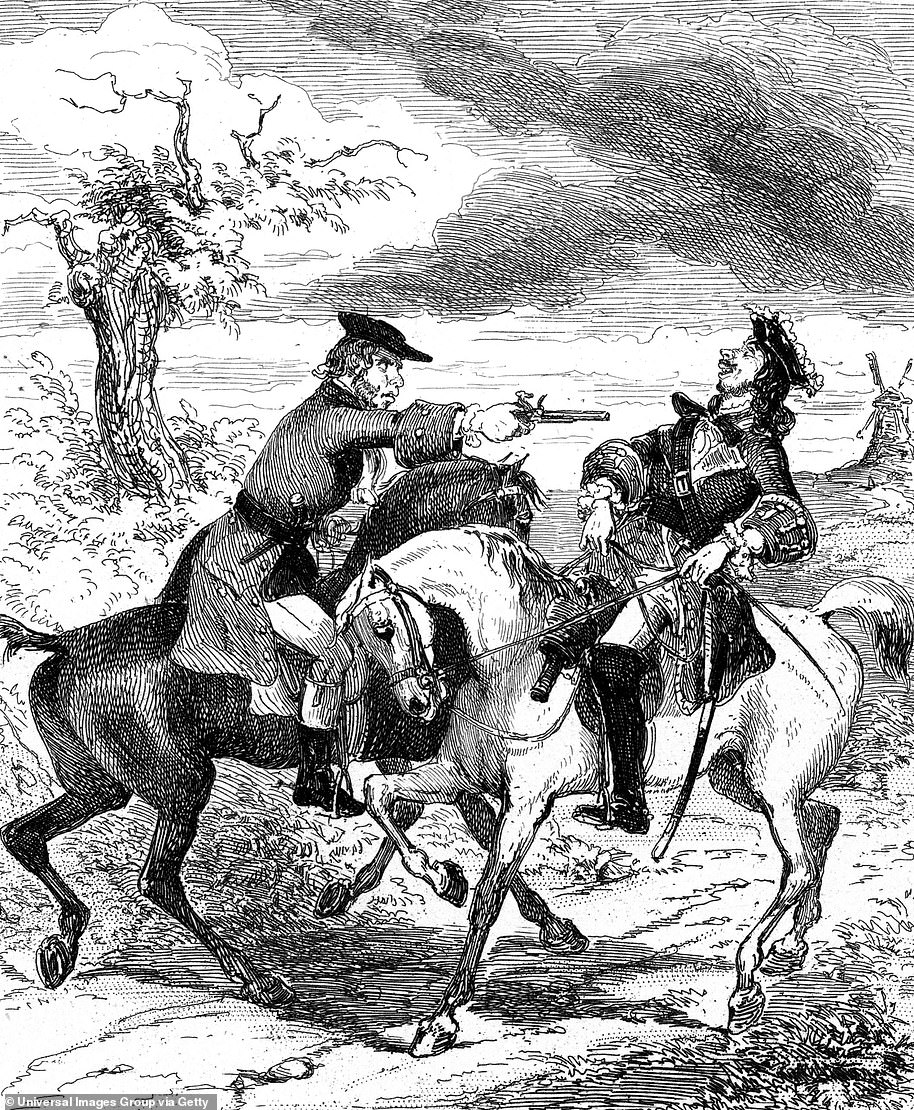 Dick Turpin, who was born in 1705, was the son of a butcher and inn keeper who became a member of a vicious gang of robbers

Their partnership ended when King was accidentally shot dead by Turpin as he was being arrested.

He fled to Epping Forest and was soon also wanted for murder when a man called Thomas Morris tried to capture Turpin alone to claim the reward and was shot dead.

Turpin moved north and a petty dispute over a shot cockerel led to his arrest in Yorkshire in the autumn of 1738 under the assumed name John Palmer.

A letter he wrote to his brother-in-law was intercepted and he was unmasked as the feared highwayman. 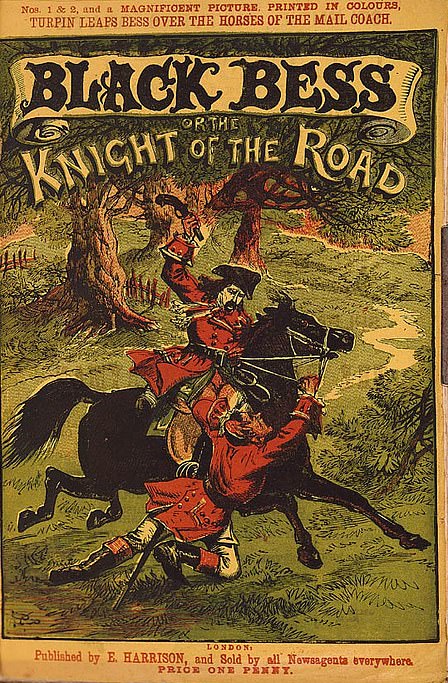 Sentenced to death he made sure he went out in style, wearing a new coat and a smart pair of shoes. For £10 3s he hired five men to act as mourners and see the proper internment of his body.

En route to his place of execution – now York racecourse – he ‘bowed’ to spectators like a celebrity. At the gallows he ‘threw himself off’ a ladder and was left hanging until dead.

After being put on display at the Blue Boar pub his corpse was buried in St George’s graveyard but then stolen by body-snatchers working for a surgeon looking for bodies of criminals for dissection.

Professor James Sharpe of York University, who has written a book about the ‘myth’ surrounding Turpin, said an angry mob spotted the body-snatchers and recovered the corpse.

According to a contemporary pamphlet the body was carried back by four men and ‘buried in the same grave’ with slaked lime to ensure decomposition to foil the grave robbers.

A headstone bearing Turpin’s name still stands in the cemetery but, in 2017, Professor Sharpe concluded in new research that it was a fake.

The prominent headstone and surrounding concrete square grave was put up after 1918, presumably to commemorate a person of historical significance and boost the tourist trade.

‘Wherever Dick Turpin is buried is a mystery, but it seems very unlikely that he’s under the current headstone,’ said Professor Sharpe.