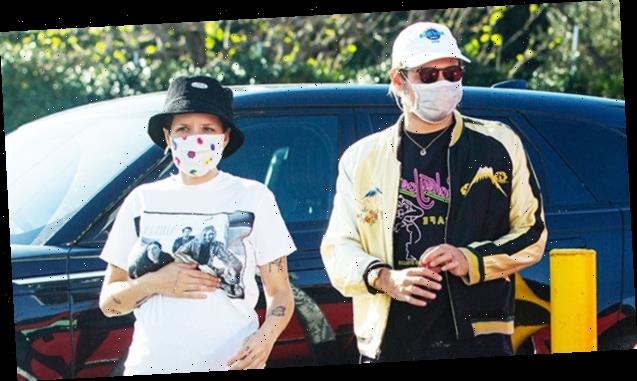 Halsey and their partner, Alev Aydin, celebrated a major milestone! The “Without Me” singer, 26, took to Instagram on March 17 and wished Alev a happy birthday in his Turkish language. “İyi ki doğdun,” Halsey began, which loosely translates to “Happy Birthday.” Halsey also wrote, “happiest birthday, aşkım,” meaning “my love” when loosely translated from Turkish to English. Alev sweetly replied to the post, writing “I love you, angel,” and called Halsey his “favorite person.” Along with the message, Halsey also included a sweet photo for their fans to see!

The photo featured Halsey capturing a selfie at an angle, which showed Alev kissing their growing baby bump. It was such a precious moment, and fans absolutely fawned over the image. The post also comes roughly two days after Halsey revealed to their fans that they identify with “she/they” pronouns, sharing the news via their social media bios. Halsey has received a ton of support from fans, who’ve been absolutely ecstatic for the star since they announced their pregnancy!

Halsey totally surprised their fans in late January when they shared a series of images with their baby bump front and center, confirming the pregnancy. It’s so clear, too, that this new journey has really left an indelible impact on the star, who mused about how their body has been changing, as well as their own perception of gender. “I’ve been thinking lots about my body,” Halsey shared in a February 18 Instagram post, featuring a carousel of images from their day.

“It’s strange to watch yourself change so quickly,” Halsey went on. “I thought pregnancy would give me very strong, binary feelings about ‘womanhood’ but truly it has leveled my perception of gender entirely. My sensitivity to my body has made me hyper aware of my humanness and that’s all. Doing a remarkable thing. And it’s grand. I hope the feeling lasts. I cook a lot, sleep even more, and read lotssss of books. I miss my family. And you guys too,” the singer assured fans.

Fortunately, Halsey has the endearing love and support of Alev in this thrilling new chapter. The two have been spotted out and about looking so loved up and supportive of one another amidst this exciting time. Halsey is wholly coming into their own as their pregnancy journey progresses, and we cannot wait to see what they share next!