If you stuck around during the credits of Loki Episode Four, which dropped this Wednesday on Disney+, you met this formidable alligator. The end-credits scene for this episode shows the recently-pruned Loki waking up in a post-apocalyptic city. Who meets him? Well, a bunch of other Lokis, naturally. Aside from the horned reptile, there’s Richard E. Grant’s Classic Loki, Deobia Oparei’s Boastful Loki, and Jack Veal’s Kid Loki. Seeing as this is a patently batshit twist of events, let’s do a quick rundown of this fearsome foursome of new Lokis—and see how they’ll impact Loki‘s final two episodes.

But first: When the episode released, there was some debate over whether or not this reptilian Loki is an alligator or a crocodile. So we reached out to a number of experts to analyze this photo. Here are their answers:

John White of the Virginia Herpetological Society said, “Unlike alligators, crocodiles have an exposed 4 tooth on the lower jaw. The animal in your photo is an American Alligator (Alligator mississippiensis).” He added a picture of a Nile crocodile for good measure: 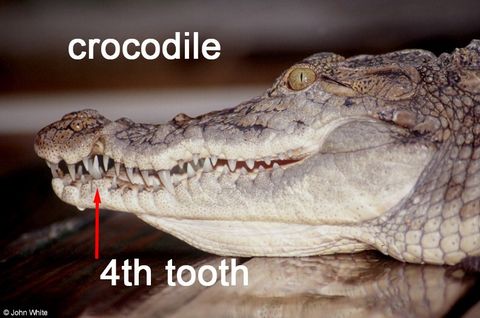 But it’s Mike Clifford, also of the Virginia Herpetological Society, who may have had the best answer: “Genetic analysis indicates it is the species Crocogator lokii.”

OK, now back to our scheduled Loki rundown. start with Deobia Oparei’s Loki, who is described as “Boastful” in the credits. There’s not a clear comic-book parallel here, which is a good thing! That means we don’t know what to expect, for once. But given that his Loki holds a hammer, it’s possible that we’re getting the Thor-Loki composite character of our dreams. As for Kid Loki, Veal’s character has an established past. In the comic books, Kid Loki is born when Loki seeks out a new start in life and is essentially reincarnated on Earth. It’s not the craziest thing to imagine that Kid Loki could be a part of a rumored Young Avengers film down the line. Regarding Richard E. Grant’s WandaVision-Halloween-episode-looking Classic Loki, there are quite a few storylines in the comics that show an older Loki, who’s usually darker and hardened by age. But with the whimsical Grant in the role? It might just be an opportunity for Grant to wear a funny costume and trade barbs with Hiddleston. It won’t surprise you to hear that Alligator Loki seems to be a new invention for this show.

So now we have six (!) Lokis running around in Loki alone. First of all, it seems like those who are pruned don’t really die—they just go to a post-apocalyptic world to linger forever. But all the Lokis featured in the end-credits scene will most likely team up to bust out of that world, teleport back to the TVA’s headquarters, and take down the evil agency once and for all. Along the way, we’ll likely get top-notch banter between the Lokis, all leading to the inevitable setup of Alligator Loki as the MCU’s lord and savior. Bet on it.