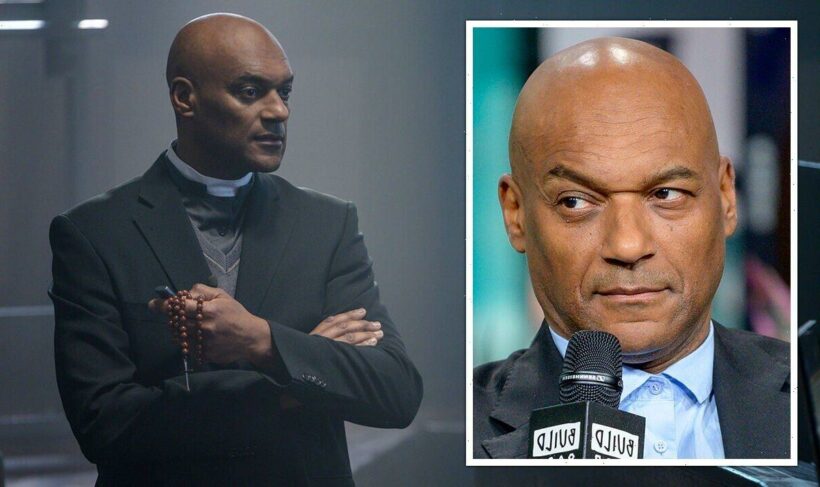 Prey for the Devil: Trailer for new thriller

Colin Salmon, 59, stars in the supernatural horror Prey For The Devil, which was one of the first films to start production during the pandemic. As a result, the cast stuck to some incredibly strict rules, including not being allowed to go out to the pub, but the James Bond actor revealed he didn’t mind too much as he blows off steam “literally”.

Colin believes his diverse array of work means he’s “been in your front room” at some point or another.

The star even jokes that he can determine where a fan knows him from based on how they look, generally falling into three categories: James Bond, Resident Evil or CBeebies.

Now, the star is taking on an entirely different type of role as Father Quinn in Prey For The Devil, originally titled The Devil’s Light.

It was one of the first films to start production during the pandemic, as they began work in the summer of 2020.

During that time, Covid restrictions were intense and in order to ensure production could continue as planned, every cast and crew member had to stick to intense rules.

While they were not allowed to go almost anywhere except for home and set, Colin noted his unique hobby that has helped him keep his cool off-camera on countless productions.

Colin revealed: “I always have my trumpet with me so I blow off steam, literally.

“I find it’s really useful for me, that’s how I get my voice to work.”

Speaking exclusively to Express.co.uk and other media at MCM London Comic Con, Colin revealed that because of the rules the cast and crew got “really incredibly close”.

He said: “We became really intimate in a good way, a healthy way, as opposed to a bar and whatever happens in those situations.

“A lot of steam was let off, but it was good steam.”

Colin also added that he has garnered a new love for Zoom, mostly because he claims it stops people from talking over one another, although he declined to name names.

He shared: “That period was really interesting because we did a read-through on Zoom and I loved Zoom in a way because people gave space to speak.

“You can’t just wah wah wah which actors allegedly can do.

“We adapted to it, that’s the key to the game anyway, adaptation.”

In the film, Colin plays a professor of exorcism and became close with his fellow professors and clergymen Christian Navarro and Ben Cross.

He continued: “I had a little time with Ben. He is an extraordinary man and apparently he used to write hits for the Bulgarian Frank Sinatra because he speaks – spoke – Bulgarian.”

The actor’s face dropped slightly as he corrected himself and spoke of Ben in the past tense.

Ben, arguably most well-known for his films Chariot of Fire and Chicago, tragically died of cancer in August 2020 shortly after filming Prey For The Devil.

Prey For The Devil is currently in cinemas.