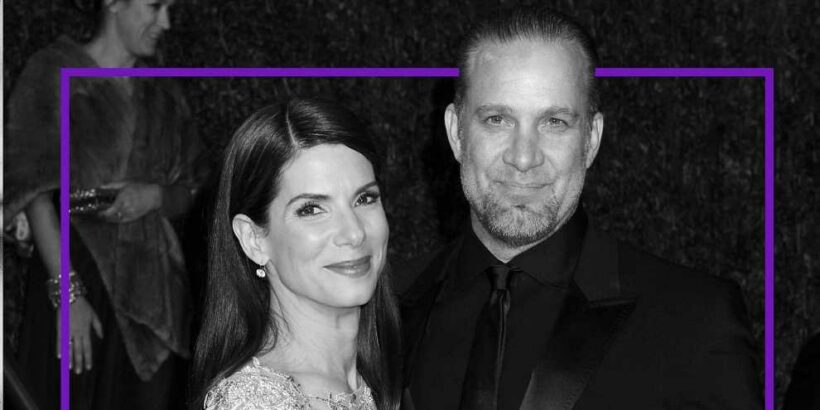 How They Met: According to Vanity Fair, Bullock gifted her motorcycle-obsessed 10-year-old godson a trip to West Coast Choppers's Long Beach headquarters for Christmas in 2003. There they met Monster Garage host James, who'd agreed to give a special tour of the shop. After the visit, Bullock returned to her office to find a missed call from James.

Suspecting that James was interested in her, she told an employee not to give him her personal number. "I said, 'Do not give the man my number — give him my email. I'll politely say, No, I'm not in a place … '" she recalled. She turned him down once, twice, and so on until James caught her off guard with a virtual game of 20 Questions.

"I said, 'Who do you think you are? You're not in a position to play 20 Questions with me!'" she remembered. "'I am not going to answer them!' I thought they were going to be 'Do you have a chassis on your car?'" But James surprised her and asked thoughtful questions about non-motorized topics. "So basically through a courtship of letters, which I didn't even recognize, I learned about a human being," Bullock said. "It was not something I wanted, needed, or looked for, but because he was a stronger person than I was, spiritually and on a tolerance level, I was lucky enough that he educated me."

Speaking more bluntly about her initial bias against James, Bullock told InStyle that she "assumed he was a homophobic chauvinist, a bigot who killed people."

James had preconceived notions about Bullock as well.

"I assumed she was a bitch and some Hollywood snob and didn't really give it two thoughts," James told Nightline in a 2010 interview, "and then I talked to her for a couple minutes and it was like getting hit in the head with a brick. Here's a woman I had assumptions about and she couldn't be farther from that."

After a brief courtship, James proposed to Bullock with a vintage Tiffany diamond ring from 1910 and they planned to wed the following year … in secret.

In July of 2005, the couple hosted 270 guests at a ranch in the San Ynez Valley under the guise of a celebration for Bullock's 41st birthday. Aspiring for a "vintage Western barbecue feel," Bullock walked down the aisle in satin cowboy boots and made James's wedding band herself in his shop. Bullock told VF that she and James planned a cross-country road trip for their honeymoon but "pulled the plug" after they were followed by paparazzi.

Why We Loved Them: James was a father of three when he met Bullock, and the actress quickly took to the role of stepmom.

"You don't have to give birth to someone to have a family," Bullock told Harper's Bazaar in 2009. "We're all family, an extended family. I'm not going to spend two seconds of my life wishing I had something I don't."

The newlyweds even moved across the street from James's ex-wife Karla to be closer to James's two children with her.

When James's second wife, Janine Lindemulder, was sentenced to prison in late 2008, Bullock and James cared for the motorcycle enthusiast's youngest child, Sunny. James won custody of his then 5-year-old daughter in December 2009.

"There is no limelight when it's just her and I trying to figure out who's going to take the kids to school and who's going to pick them up and what we're going to have for dinner and that type of stuff," James told Nightline when asked about the dynamic of their relationship. "It was normal."

Both parties said a lot of beautiful words about their relationship (though, OK, some actions majorly negated them … ).

On Oscar night in 2010, hours after Bullock had accepted the Academy's highest honor, James gushed to People over his accomplished wife.

"It's a once-in-a-lifetime opportunity to support my wife and her work," he said of his presence at the ceremony. "She does it all the time for me. She goes to Mexico, to the desert, to the hospital — a lot — to support me and my work. The least I can do is put on a suit and support her." "She's beautiful. She's amazing. She takes my breath away," he went on. "Sometimes I look at her and I do, I just lose my breath."

The Breakup: Ten days after millions watched seemingly dutiful husband James tear up as his wife accepted her first Oscar, the bombshell of all bombshells was dropped (no pun intended).

In Touch Weekly published a story based on the account of tattoo artist Michelle "Bombshell" McGee, who claimed to have had an 11-month-long affair with James while Bullock was filming The Blind Side.

"The vast majority of the allegations reported are untrue and unfounded," James said in a statement to People.

"There is only one person to blame for this whole situation, and that is me," he went on. "It's because of my poor judgment that I deserve everything bad that is coming my way."

"This has caused my wife and kids pain and embarrassment beyond comprehension and I am extremely saddened to have brought this on them. I am truly very sorry for the grief I have caused them. I hope one day they can find it in their hearts to forgive me."

In the next week two more women came forward claiming to have had sexual relations with James while he was married to Bullock — one of whom said their affair lasted for two years. As the number of alleged mistresses increased, James checked himself into rehab for "personal issues."

About a month after the initial allegations surfaced, Bullock filed for divorce, telling People, "I'm sad and I am scared." Amid divorce news, Bullock dropped a bombshell of her own: she adopted a baby!

The Blind Side star revealed that she and James had welcomed son Louis Bardo that January and planned to keep the new addition a secret until after awards season.

Bullock reportedly described her post-split relationship with James as "a different one. A bittersweet one. One of new understanding. One of forgiveness. One of support for his recovery." She also shared her plans to adopt "as a single parent," adding, "Anything else [as far as James's involvement] will be day by day."

"The love I have for Louis cannot be put to words," James told People. "Not having him around to love and to hold has left a huge hole in my heart."

In James's Nightline interview that May, he admitted to telling Bullock "basically everything" after the scandal broke, but he refused to publicly disclose just how many women he was involved with.

"I was unfaithful to my wife and I'm not going to put any kind of count to it," he said. "Just the fact that I took a perfect marriage and a perfect wife and stepmother and threw it away because of my actions, it doesn't matter … It could've been a million [women]. Bad is bad no matter what it is."

James also said he knew he'd get caught at some point and went as far to say that he thought he actually wanted to get caught. "It was me trying to self-sabotage my life."

"Everything that happened in our marriage and everything I said and every good moment for her and for me and for the kids, none of it was bullshit," he went on. "It was all real. I'm doing it because I've basically never felt good enough, for anyone."

The following year, James reemerged in the public eye with a memoir and plenty more to say about his relationship with Bullock.

"I'm a beer drinker/biker/don't have a problem punching someone, but all that ended," he said of his time under the Hollywood spotlight in an interview with The Daily Beast. "I couldn't do anything to bring any kind of embarrassment. It was a very controlled way of living, and I don't think it was very healthy."

"The problem was me," he reiterated in an interview with Howard Stern. "She could stand there in front of the world and say she loved me, but In my mind I was thinking, 'Yeah? Bullshit. You don't love me. I'm just some biker kid.'"

Bullock has only spoken indirectly about the ordeal in the years since. "I am exactly where I want to be now," she told Vogue in 2013. "You can't go backward. I'm not going backward. I'm grateful that I'm here, blessed to have what I have. Nobody can be prepared for anything."

"My life took a trajectory that wasn't very pleasant," she told The Independent in 2018, "but I feel like it had to happen in order for me to fully understand what family was about."

Where There Are Now:

Bullock reportedly began dating photographer Bryan Randall in 2015. She recently referred to her longtime partner as the "love of my life."

The actress's latest, The Unforgivable (her first film since Bird Box in 2018), launches on Netflix Dec. 10.

Soon after James's cheating scandal unfolded, he began dating and ultimately got engaged to Kat Von D. The engagement was broken off in a matter of months and Von D later alleged that 19 different women had come forward and admitted to their involvement with James while they were dating. James wed his fourth wife, drag racer Alexis DeJoria, in 2013.

#TBT: Check in every Thursday as we throw it back to some of our favorite celebrity couples of all time.