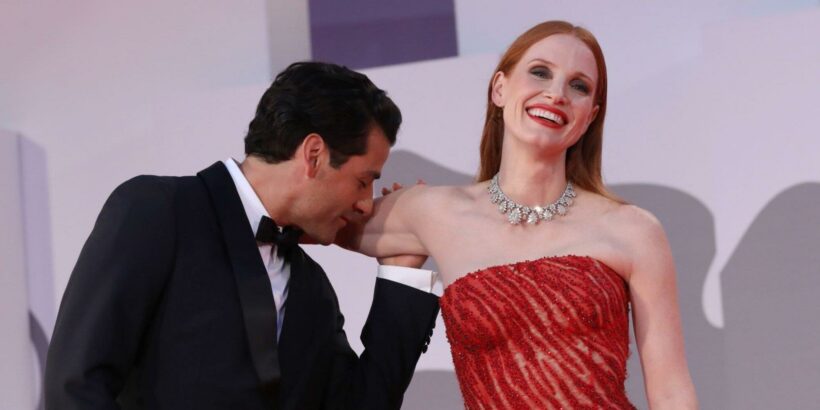 This year's Venice International Film Festival may have been about the movies (Dune, we get it), but the moment that's seared into everyone's collective conscious is undoubtedly the red-hot red carpet kiss involving certified dreamboat Oscar Isaac and Jessica Chastain at the premiere of their HBO miniseries, Scenes from a Marriage.

The slow-motion caress, which saw Isaac planting a soft kiss to Chastain's arm, became a viral sensation — even as Isaac's wife, Academy Award-nominated filmmaker Elvira Lind, stood in the background watching it all go down. Chastain paid a visit to the Today show and explained that it was the perfect combination of slow-motion magic, acting, and two friends knowing exactly what to do to get the internet talking.

"We're acting, but also Oscar and I have been friends — we went to college together — so we've been friends more than half of our lives," she said. "Let me just say, though, this is a slow-motion video, and everybody is super sexy in slow motion."

Chastain continued, saying that at normal speed, the situation doesn't have the sex appeal and jaw-dropping allure.

"I think it was really funny because when you look at it in regular speed, I'm looking straight ahead and he looks over at me and he just kind of goes to give me a peck on my elbow, and at the same time, I'm going to give him a hug," she finished. Another reason tounges wagged at the seemingly intimate connection? Chastain says that thanks to lockdowns and social distancing, simple touches seem taboo and tantalizing.

"We have all been locked in our houses for so long. When this video went viral, I was like, people just need to see people touch and hold each other," she said.

Proving that she's in on all of the jokes, Chastain tweeted an image from The Addams Family after her now-viral clip hit the internet.