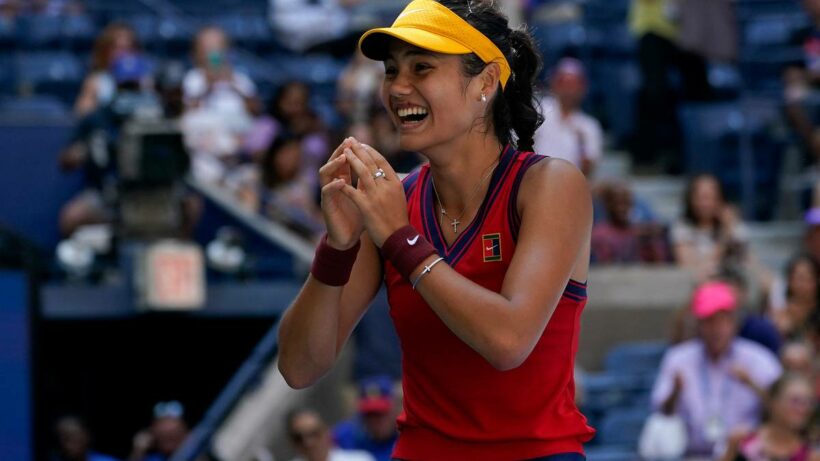 Emma Raducanu came to Flushing Meadows for her second Grand Slam tournament ranked so low that she needed to go through qualifying rounds just to get into the main draw. She’s just 18, so new to all of this, and yet no one has figured out a way to stop her.

Not even take a set off her.

Showing off the shots and poise of someone much more experienced, the 150th-ranked Raducanu became the first qualifier to get to the U.S. Open semifinals in the professional era — and, remarkably, the second teen in two days to secure a spot in the final four — by eliminating Tokyo Olympics gold medalist Belinda Bencic 6-3, 6-4 today.

“To have so many young players here doing so well — it just shows how strong the next generation is,” said Britain’s Raducanu, who joins Canada’s Leylah Fernandez, 19, in the semifinals. “Everyone’s on their trajectory. … It’s my own journey at the end of the day.”

And what a ride she is on at the moment.

Raducanu won all 16 sets she has contested through eight matches over the past 1 1/2 weeks — three during the qualifying rounds and another five in the main draw. She next will face No. 4 seed Karolina Pliskova of the Czech Republic, a two-time major runner-up, or No. 17 seed Maria Sakkari of Greece, a semifinalist at this year’s French Open, on Friday for a spot in the final.

The other women’s semifinal will be the 73rd-ranked Fernandez against No. 2 seed Aryna Sabalenka.

In today’s men’s quarterfinals, Novak Djokovic was scheduled to try to extend his bid for a calendar-year Grand Slam by facing Matteo Berrettini at night in a rematch of the Wimbledon final, while Olympic champion Alexander Zverev met Lloyd Harris.

Raducanu was ranked outside of the top 300 in late June when she got a chance to play at Wimbledon thanks to a wild-card invitation. In that Grand Slam debut, she reached the fourth round before stopping during that match when she had trouble breathing.

That tournament allowed the world to begin to get familiar with her style of crisp, clean tennis, managing to attack early in points from the baseline without sacrificing accuracy. By the end against the 11th-seeded Bencic, a U.S. Open semifinalist in 2019, Raducanu had nearly twice as many winners as unforced errors, 23-12.

She also showed gumption, particularly at the end, when she fell behind love-30 in each of her last two service games before pulling through.

At the outset, Raducanu trailed 3-1.

“Her ball speed definitely caught me off-guard,” Raducanu said about the hard-hitting Bencic. “I definitely had to try to adapt.”

She did just that. Quickly, too. From there, Raducanu reeled off five games in a row to take the opening set, the first dropped by Bencic all tournament.

Bencic only had been broken three times through four matches, but Raducanu equaled that total and became only the third woman ranked outside the top 100 to advance to the U.S. Open semifinals.

When Bencic double-faulted to get broken and fall behind 3-2 in the second set, she trudged, slow as can be, to a corner of the court to retrieve her towel. When she got to her sideline seat, she whacked her racket against her equipment bag, then plopped herself down and smacked the racket against the ground.

Raducanu jogged to the sideline, showered in applause and cheers from the Arthur Ashe Stadium crowd.

Just like the prior afternoon, the Ashe spectators lent their considerable support to a teenager whose name is not yet well-known and who’s not yet all that accustomed to gracing these stages.

Yesterday, a day after turning 19 and sharing cupcakes with Raducanu and others in the locker room, it was Fernandez getting past No. 5 seed Elina Svitolina 6-3, 3-6, 7-6 (5) to become the youngest semifinalist at Flushing Meadows since Maria Sharapova in 2005.

Today, it was the even-younger Raducanu’s turn.