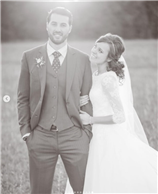 There was a time when Jinger Duggar and Jeremy Vuolo’s marriage was regarded as the rare Duggar success story.

For years, the family had been hounded by rumors that Jim Bob Duggar arranges his daughters’ marriages and that several Duggar women had been forced into loveless unions against their will.

But Jeremy and Jinger’s happiness seemed to refute those claims.

In Jeremy, Jinger found freedom that never would have been afforded her as a single woman in the Duggars’ ultra-conservative society.

It was with Jeremy’s permission that Jinger began to wear pants in violation of her family’s dress code and generally find an identity for herself separate from that had been imposed upon her by her family.

Together, the two of them blazed new trails as they made homes first in Laredo, Texas, and then in Los Angeles.

But not long after the Vuolos settled on the West Coast, rumors of marital discord began to circulate on social media.

Insiders claims that Jinger was miserable with Jeremy and that life in LA had left her feeling alienated and hopelessly alone.

When the Vuolos put their podcast on hiatus in order to focus on their marriage, it seemed that fans’ worst fears had been confirmed.

There were reports that Jinger and Jeremy had grown apart and were remaining married only because they were both raised to believe that divorce is a mortal sin.

Jinger and Jeremy kept a lower profile than usual after taking a break from their show, and many of their social media followers took the couple’s silence as a tacit confirmation that the rumors were true.

Now, however, it appears that the couple is once again broadcasting their marital bliss on social media.

And we may never know for sure if they’ve patched things up, of if the rumors of their difficulties were greatly exaggerated.

Over the weekend, Jinger posted some throwback photos from her wedding day to celebrate five years since she and Jeremy tied the knot.

Jinger turned off comments on the post, so she didn’t receive any words of congratulations from fans.

But we’re sure that for many, the post brought up memories of the day that Jinger and Jeremy surprised fans by announcing their union on social media.

“YES! We are married! We are so thankful to God, our parents and our wonderful families and friends for celebrating this day with us and for helping us arrive at this moment in time,” the couple wrote.

“We love that we now are beginning our lives together as one, before God.”

Fans knew that Jinger and Jeremy were engaged, but there’s always a lot of secrecy surrounding Duggar weddings so the public didn’t find out about the big day until after the fact.

At the time, the main reason for all that secrecy was to lessen the likelihood that diehard fans would crash the party.

These days, Duggars turn off comments on their posts so that they don’t get raked over the coals by critics who are rightly disgusted by the Josh Duggar child pornography scandal.

A lot has changed in the Duggars’ world over the course of the past five years.

But it seems that despite rumors to the contrary, Jinger and Jeremy have stuck by one another through it all.