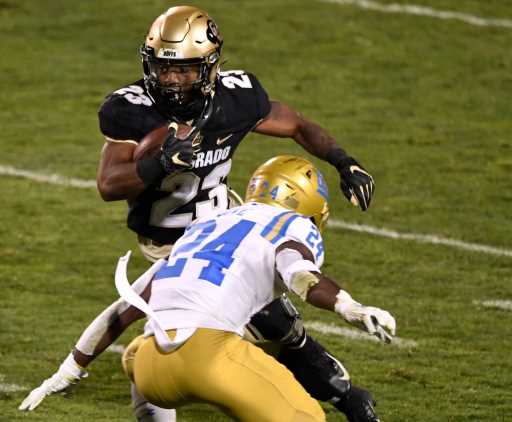 Welcome back Jarek Broussard. Where ya been?

We kid, kid. Congrats. Last Saturday’s bonkers 37-34 overtime win over Oregon State was the game we’d been waiting to see out of the CU offense since — well, at least since Ed McCaffrey and the UNC Bears rolled into town for Week 1.

For the first time against an FBS opponent, the Buffs (3-6, 2-4 Pac-12) looked like the team folks had expected to see coming off last fall’s pandemic bowl berth. Relentless in the run game, physical up front.

CU gashed the favored Beavers for 222 yards on 44 carries. Broussard, the reigning Pac-12 Offensive Player of the Year, hit the 100-yard mark on the ground for the first time this fall, finishing with 151 on 24 totes, including a 49-yard gallop in the fourth quarter.

Hats off to No. 23 for breaking off chunk plays again. Hats off to CU offensive coordinator Darrin Chiaverini, who’s taken a lot of heat for weeks on end. Hats off to coach Karl Dorrell, for making a tough in-season call to can former offensive line coach Mitch Rodrigue and then going back to the well. Hats off to the Buffs’ offensive line, which has its mojo back to the tune of 339 rushing yards while allowing only one sack, combined, over the last two games.

Now comes the tricky part: Building on that momentum during a trip to UCLA (5-4) this weekend.

The Bruins’ defense isn’t any great shakes — UCLA is giving up 28.2 points and nearly 400 yards game. But the guys from Westwood have been stingier than you’d expect in the box, and have allowed the fewest rushing yards per tilt (116.6) of any Pac-12 defense thus far. If the resurgent Buffs can flip that stat, they’ve got a chance to flip the 2021 season narrative, too.

Although you could call it a case of too little, too late. But given how the CU offense looked a month ago, better late than never.

The Buffs’ first league win in three weeks moved CU up to No. 20 in the latest Denver Post Best of the West College Football Top 25 poll. The rival Rams (3-6), who dropped a third straight game this past Saturday, at Wyoming, slipped from No. 18 in last week’s poll to No. 22 in the latest installment.

The Denver Post Best of the West College Football poll each Monday ranks the top 25 FBS programs from the Front Range to the Pacific Ocean, as culled from the Pac-12, the Mountain West and BYU.

The rest of the latest rankings follow, with in-state squads listed in bold:

The next Best of the West poll will post Monday, Nov. 15.