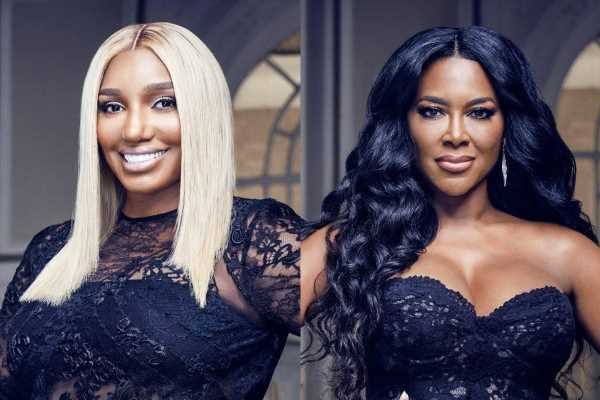 Kenya Moore will be returning to The Real Housewives of Atlanta Season 14 and already started filming the show. The beauty queen is in her second stint as a housewife, following a one-season break during season 11. Throughout her time holding a peach, she found herself at odds with OG star Nene Leakes. However, after Leakes’ husband Gregg died, the two reality show personalities have been speaking. After Leakes expressed interest in returning to the franchise, Moore is now reacting.

Moore and Leakes don’t have the best of history together. The season that Moore took off, the Dancing with the Stars alum was pregnant. Moore made an appearance on RHOA and Leakes took a jab at her by rhetorically asking if she was giving birth to a buffalo. This comment was not taken well by Moore as she believed it was a dig at her unborn baby. Leakes would later clarify that she wasn’t referring to the baby but talking about Moore’s appearance.

Although they cleared up the misunderstanding, there was so much animosity between the two peaches that they were not able to move past it. Leakes would not return for season 13 and they didn’t repair their friendship completely. However, after Leakes’ husband died, Moore reached out to her former co-star and attended Gregg’s farewell. With both of them not in a “bad place,” as Moore recently said, what does she think about Leakes possibly returning?

“You know, I don’t know. I know she has a lot of fans and people love her, and definitely, she has made her mark on the show and she made the show what it is,” Moore said in an interview on Daily Pop. “I think that interview was from her, you know, wanting to come back.”

Moore added that it was up to “the higher-ups” to talk about whether Leakes had a future on the show but said she was a “valued person of the franchise.”

Nene Leakes was over the drama after ‘RHOA’ Season 12

Leakes recently revealed she had a lot of “unfinished business” at RHOA and was open to returning to the show. During an appearance on The Real, the former Fashion Police star said that she wanted to have a conversation with Andy Cohen. Shortly after Leakes left the show, she blasted Cohen on social media making harsh claims against her former boss and friend.

Even after Leakes left RHOA, she was already in a different place and claimed to want to move past the drama — especially with Moore.

“I feel like, there’s nowhere for me and Kenya to go,” Leakes told ET in May 2020. “Like, at this point, it looks stupid to continue to argue. I’ve extended olive branches to her, I’ve apologized, I’ve agreed to move on. There’s nothing else that I can do. I’ve done everything that was asked of me to do, I did.”

In addition, Leakes said there was “no reason” for her to continue arguing with her. Leakes would say in another interview that she wouldn’t want Moore fired from RHOA as “she’s perfect for the show.”