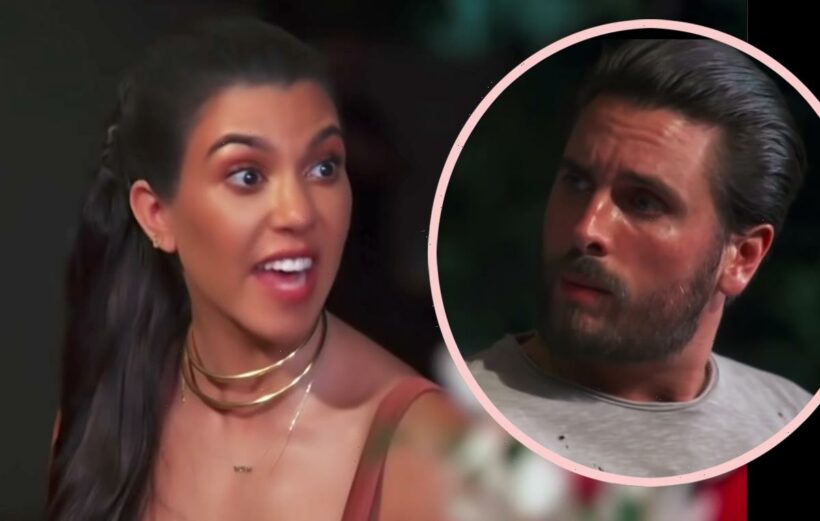 The new Hulu incarnation of the Kardashians reality TV franchise is coming in so hot, we’re already getting reports of some of the juiciest moments from those who have seen advance copies!

We obviously expected from all those previews to see PLENTY of Kourtney Kardashian and Travis Barker. Or at least the back of their heads as they smashed their faces together ad nauseam! Ha!

One thing we didn’t expect in the premiere? To see the moment Kourt responds to learning about ex Scott Disick‘s disgusting reaction to her PDA tour.

If you don’t recall, after seeing some paparazzi shots of Kravis getting kozy on a boat in Italy in August of last year, Scott looked for a fellow scorned ex to commiserate with. He messaged his baby momma’s other most recent ex, Younes Bendjima, to talk trash, writing:

“Yo, is this chick OK!??? Brooooo like what is this. In the middle of Italy”

You know, because no one gets steamy in boats in Italy, romance is the furthest thing from anyone’s mind there. (Can you hear our eyes rolling?)

Anyway, Younes was NOT biting. In fact, the French model wrote back:

And the reason we know what they wrote is because someone leaked the text exchange online. And yes, Kourtney saw it. But we never thought we’d get to see her reaction!

However, according to multiple reports, in the premiere episode of The Kardashians (no Keeping Up With — it’s cleaner), we actually see Kourtney hit back at Scott for the first time after the jaw-dropping reveal!

In a scene, she gets a text from Scott that comes clean about the message, we guess trying to get ahead of things after it’s already been leaked. Scott apologizes for the judginess and going behind her back with Bendjima, but gurl is not having it. She writes back:

Well, we can’t disagree! It’s clear the injury was still too raw for Kourtney to forgive at that point. And hey, why should she take the apology as sincere anyway, right? We mean, he only apologized once he got caught!

We’re so curious to see what comes next in that relationship as they try to keep their co-parenting copacetic. We’re guessing that’s going to be Scott’s big role in the season. Are y’all planning on watching when The Kardashians premieres on Thursday??