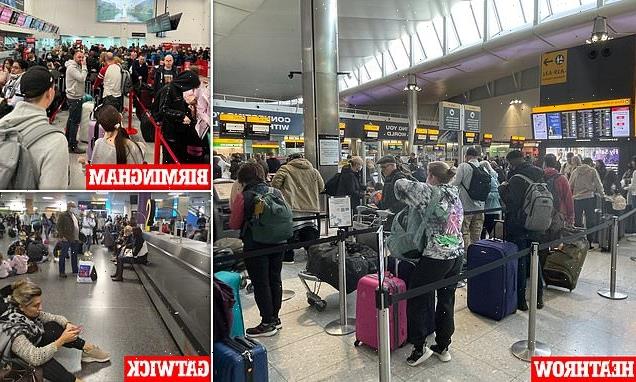 Emergency plans are being drawn up to avoid airport chaos in the Easter getaway.

Border guards are gearing up for ‘significant problems’ as millions of holidaymakers head abroad. It is feared passport queues could last hours.

Flight cancellations and Covid staff shortages were still causing misery yesterday with British Airways scrapping 64 services and EasyJet another 25. Carriers have cancelled hundreds of flights over the past month.

Lucy Moreton of the Immigration Service Union said backroom staff were being offered bonuses to man desks at Heathrow. 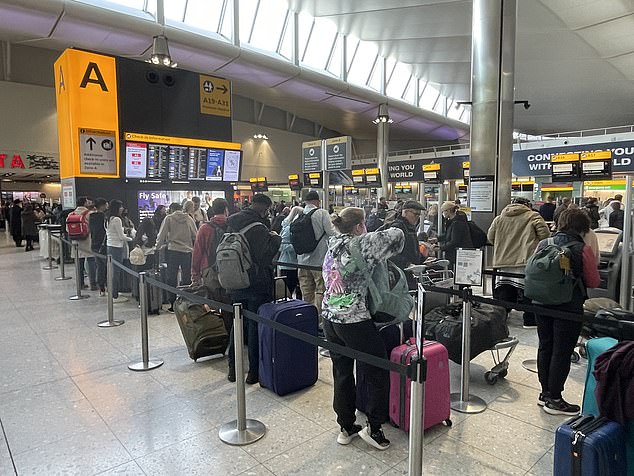 The volunteers, who usually carry out checks on prohibited items, will be pushed to the front lines at airports and ports to prevent chaos. Miss Moreton said border forces were already stretched due to virus absences and the Channel migrant crisis.

‘There’s the potential for significant problems at the tail-end of this week and at the weekend and planning has already started,’ she added. ‘We’re bringing staff down from Scotland and Northern Ireland to Heathrow.

‘They get expenses and overtime and they’re being offered a cash bonus for each shift they cover at Heathrow. Some passengers will sail through, but others could be looking at several hours in a queue. It won’t be chaos universally but there will be patches.’

Pictured: A long queue for check-in at Birmingham Airport today 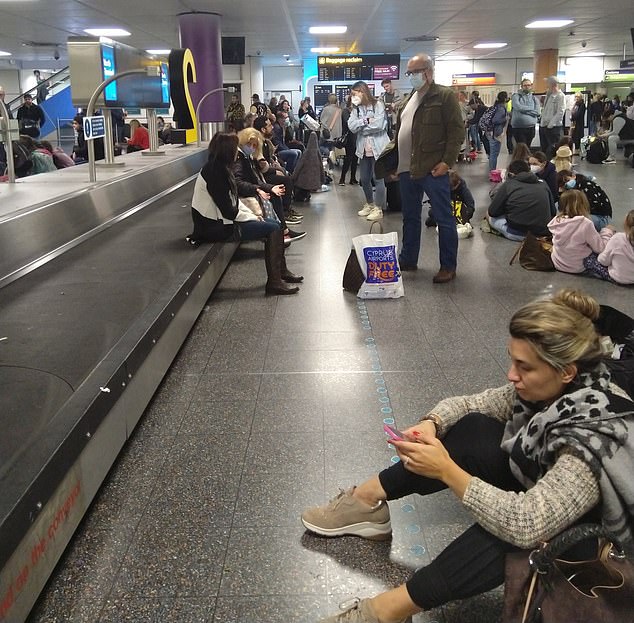 Pictured: People wait for their baggage at Gatwick today as airports remain busy 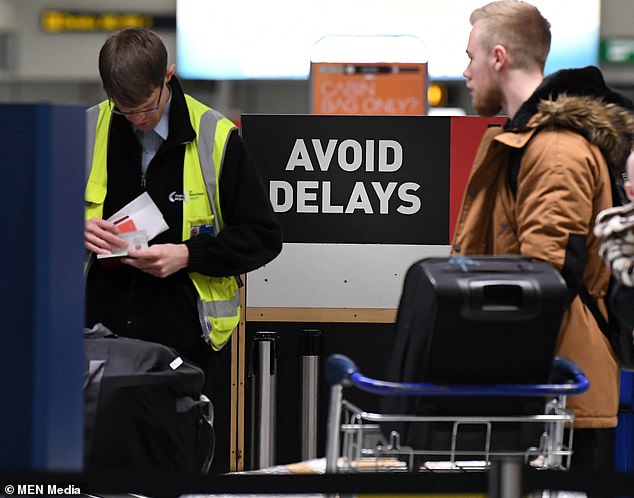 Some travel firms cut huge numbers of workers in the pandemic and are racing to find staff to cope with soaring demand. Pictured: Manchester Airport on April 8 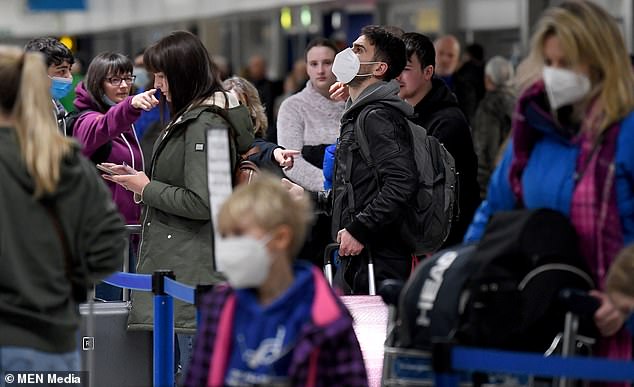 Some travel firms cut huge numbers of workers in the pandemic and are racing to find staff to cope with soaring demand. But the drive is being hampered by delays in carrying out security and counter-terror checks.

Martin Chalk, chief of the pilots’ union Balpa, said: ‘There will be problems into the summer. To be working in an airport you need an airside pass, which needs a criminal records and counter-terror check, which are taking months. The challenge won’t be answered quickly.’

A senior aviation source said: ‘It’s taking much longer to get the background checks done – two to three times as long – and it was already taking as long as 14 to 15 weeks.’ 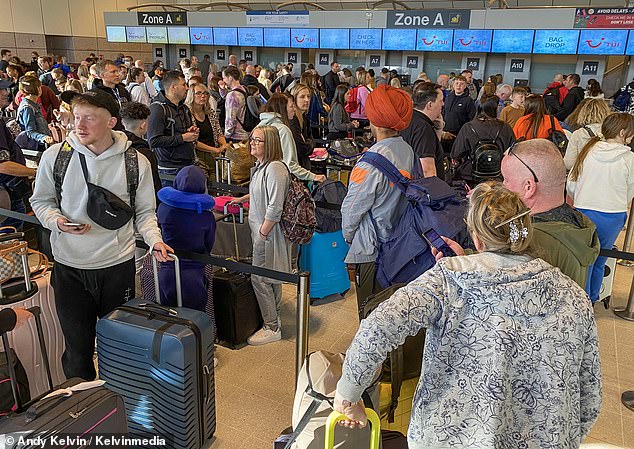 Pictured: Despite pleas from airport bosses to arrive three hours before flights, large queues are seen at the airport check-in at Manchester Airport on Saturday April 9

Travel operators are now at their busiest since the start of the pandemic. Nearly 4.2million passengers passed through Heathrow last month, only 35 per cent down on the 6.5million of March 2019.

Good Friday is set to be the busiest day of Easter with 2,430 flights leaving the UK. Flight data specialists Cirium show 9,212 will depart over the bank holiday weekend, 78 per cent of the total in pre-pandemic 2019.

Some passengers reported waiting up to 90 minutes to get through check-in and security at Manchester Airport yesterday. And dozens of families have vented their anger at BA over baggage problems. 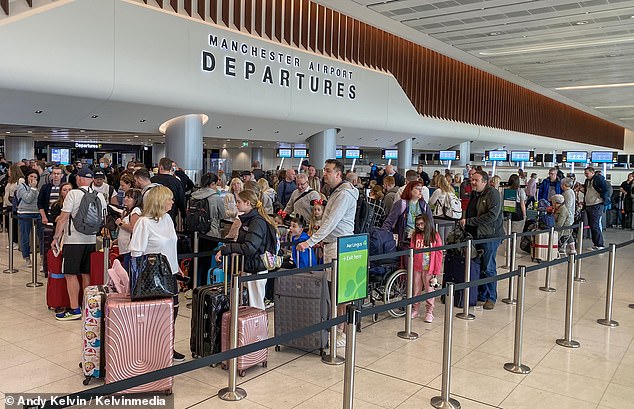 Passengers have been forced to leave airports without their belongings, in some cases waiting five days for them to be forwarded on. Pictured: Passengers are seen queueing at check-in on Saturday April 9 at Manchester Airport 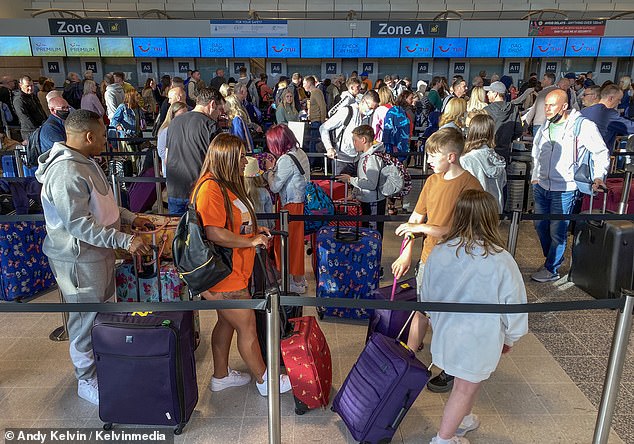 Passengers have been forced to leave airports without their belongings, in some cases waiting five days for them to be forwarded on.

Rory Boland of Which? Travel said: ‘Woefully understaffed airlines have booked far more flights than they can operate this Easter, with passengers of BA and EasyJet seeming to be the worst affected.’

A Home Office spokesman said: ‘We are working closely with all UK ports and airports to ensure passengers have the smoothest possible journey, and we will continue to deploy our staff flexibly.’ 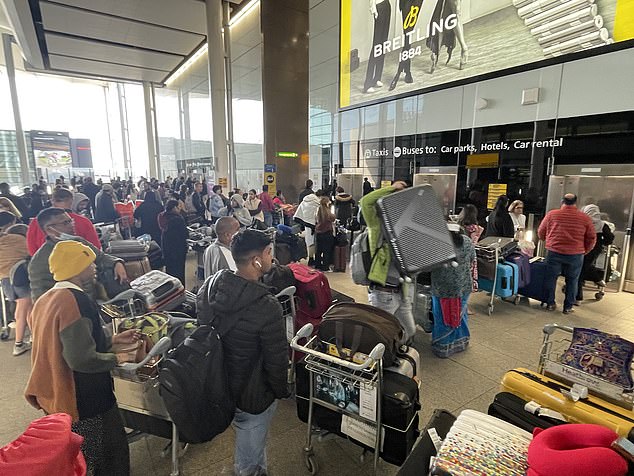 Pictured: Crowds of travellers at Heathrow Terminal 2 today as they prepare for holidays 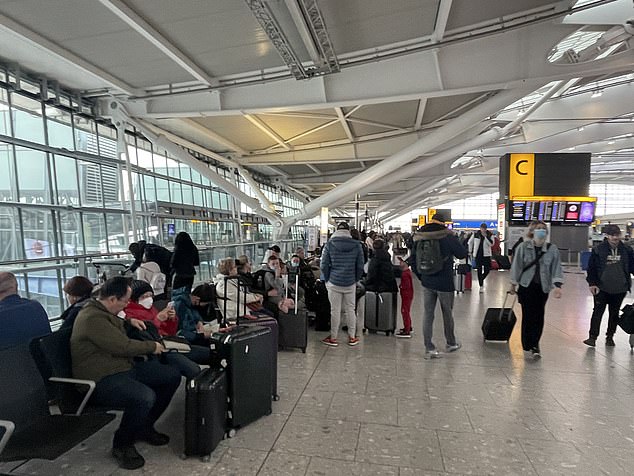 Pictured: A busy Heathrow airport as people prepare to head off on Easter holidays

To add to travellers’ woes, the Transport Salaried Staffs’ Association yesterday put ministers on notice that it was ready to bring the railways to a halt with a national strike.

The union, which represents ticket office and control room workers, wants guarantees that firms will not make any compulsory redundancies this year and salaries will match inflation. 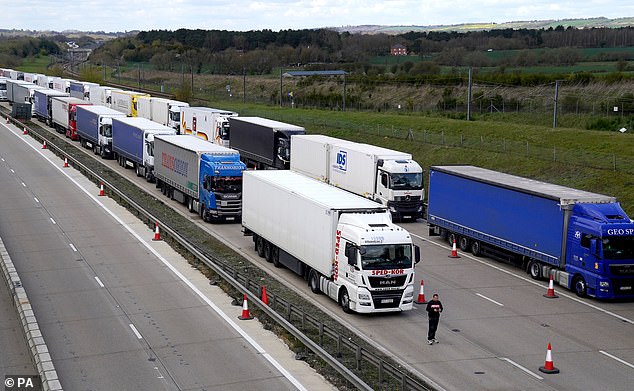 Severe disruption on roads leading to cross-Channel services in Kent continued yesterday. Pictured: Lorries queue on the M20 near Ashford in Kent on Saturday April 9

Why weren’t they ready for lift-off after lockdown?

By Mark Palmer, Travel Editor for the Daily Mail

Were a business traveller to fly from overseas into Britain this week with a view to opening an office in the UK, he would likely take one look at the carnage and fly out again, concluding that the travel sector in Britain plc is not fit for purpose. And who could blame him?

It’s not as if the surge in demand for holidays over Easter has come as any great surprise. There’s been plenty of time to put contingency plans in place.

And what makes the debacle so infuriating is that for the past two years airlines and airports have banged on and on about wanting to see an end to costly testing and the filling out of passenger locator forms. Now, that day has come and they can’t cope. 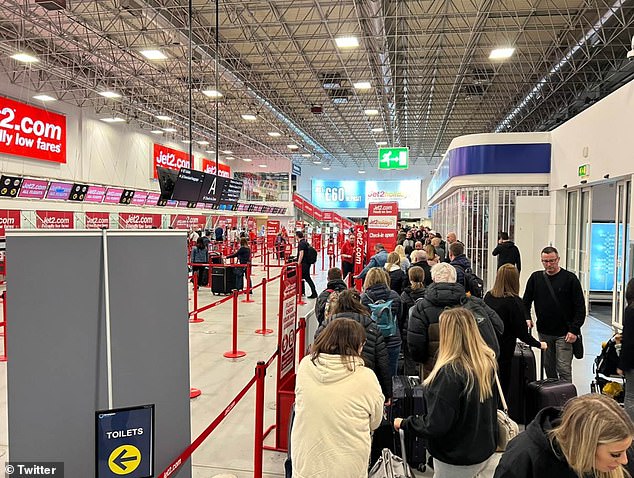 It’s not as if the surge in demand for holidays over Easter has come as any great surprise. There’s been plenty of time to put contingency plans in place

It’s not short-sightedness but a case of being blind to a problem that was inevitable without incisive leadership and proper planning. Both have been sadly lacking.

Blaming the misery that holidaymakers have experienced in the last few days – and will continue to experience this week – on the rise in Covid infections is disingenuous.

Even before Christmas the World Travel & Tourism Council warned of severe staff shortages if the travel industry failed to hire and train up new staff to replace those who were let go at the height of the pandemic.

It didn’t happen, not least because the wages on offer have been at 2019 levels. Which is why children have been forced to urinate into plastic bags while queuing with their parents; why more than a thousand flights have been cancelled and why some people have waited more than three hours to retrieve their bags.

The blame game has already started, with airlines blaming the airports for their lack of preparation and airports blaming airlines for ratcheting up the number of flights in the hope of recouping their losses – and then cancelling them with little warning. 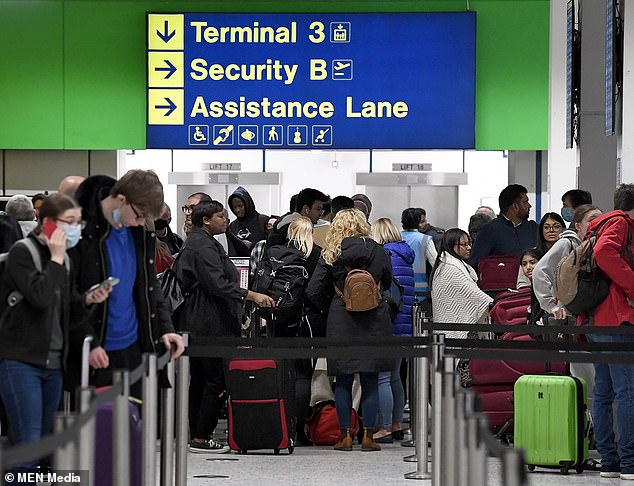 Now, confidence in travel is at risk and that’s dangerous. Travel in the UK accounts for nearly £150billion a year, more than 7.2 per cent of national output.

Transport Secretary Grant Shapps has been unusually silent in the last few days but he and his department need to make sure that the scenes we are witnessing never happen again.

Staying put over Easter seems an increasingly attractive option – because Good Friday looks set to be a rotten Friday for those keen to move about the country.

The West Coast main line will be closed between London Euston and Milton Keynes over the weekend for upgrades on the existing line and HS2 work, while Network Rail plans to carry out more than 530 engineering projects.

Drivers should also expect long queues on roads, with some 21.5million leisure trips expected to be made over the Easter holiday.

Expect a number of roadworks even though no one might be working on them. 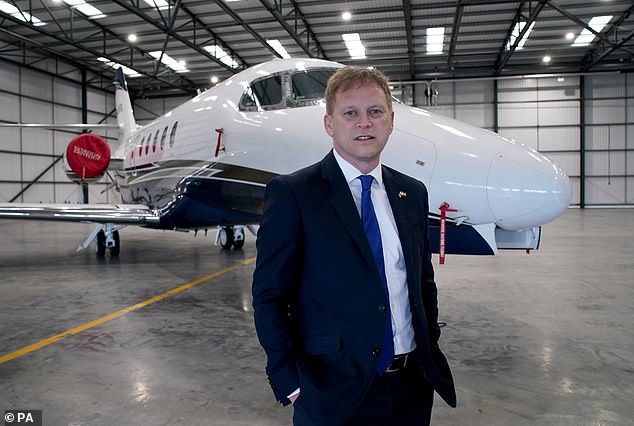