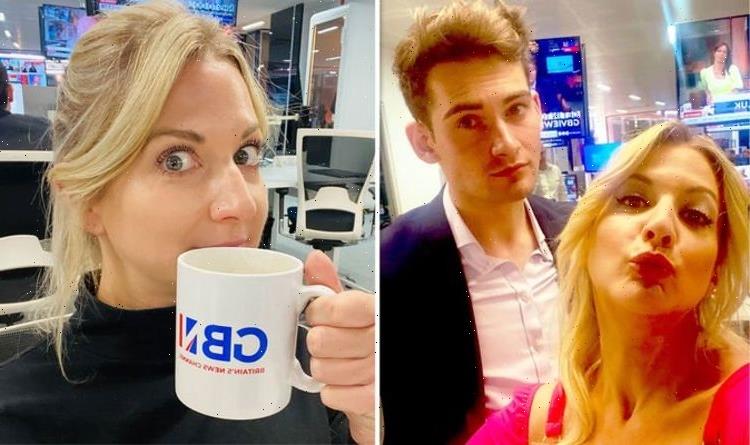 Alex Phillips, 37, has likened her bright pink dress and blonde hair to a Barbie doll and grabbed her co-star to join her as the character’s male counterpart Ken. The GB News presenter was seen pouting to the camera while Tom pulled a straight face.

In view of her 41,000 Twitter followers, she wrote: “Looking like the Barbie and Ken of news here @tomhfh.”

One wrote: “Pucker up Barbie Alex,” while a second added: “You wish!”

“You is better than Barbie,”(sic) a third commented.

Another penned: “Hi Alex.. I really enjoy you and Simon on GB News.. you are a ray of sunshine to his stiff upper lip.

“You are the foil for each other. #GBNewsWins.”

Ahead of going live on air today, she shared a picture of her co-star cheekily flashing the V sign behind her head.

Fans of the show have praised the pair’s partnership on the micro-blogging site.

One commented: “Love the show. You are both brilliant together. Long may it continue!”

“Love your rant slot keep up the good work,” a second added.

A third added: “Loving @GBNEWS at the mo, particularly @SimonMcCoyTV + @ThatAlexWoman; gr8, refreshing personalities and such diverse range of news and views.(sic)

“Just what we need.”

She replied: “Thanks Jamie! We try our best.”

Simon joined the show following his departure from the BBC in March.

After a colleague spilled the news on Twitter, Andrew Neil later confirmed the host had signed up for his new venture.

He said of his team: “[GB News will have] Anchors with a bit of edge, a bit of attitude, bit of personality – and people will make an appointment to view them.