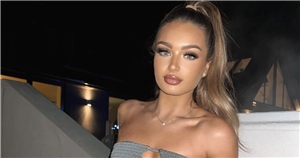 Lucinda Strafford shared a photo of herself from her and her ex boyfriend's rumoured home weeks before entering the Love Island villa.

Love Island star Lucinda, 21, has been hit with claims that she and Brighton and Hove Albion player Aaron Connolly reunited shortly before she jetted off to Mallorca.

Now details of an apparent joint Instagram page, which has now been deleted, is said to have shared snaps of the pair's home together, according to The Argus.

Snaps from the account showed the exterior of the large luxury home, including a balcony which wrapped around the house.

Meanwhile, the top of the house is also distinctive with solar panels on the roof and glass accents.

Other now-removed snaps see a spacious marble kitchen with a large island in the middle, complete with plush suede-look bar stools.

And it appears Lucinda, who was left horrified after her hair turned green, shared snaps from the glam home just weeks before storming the villa as a stunning bombshell.

One image sees Lucinda relaxing in a gorgeous khaki bikini while perched on the edge of a hot tub. In the background of the snap, the distinctive roof from her ex's reported shared home can be seen.

As Lucinda shared the photo on her Instagram page on Wednesday 23 June, the Ditchling-based beauty added the location of Brighton and Hove to the post, where Aaron plays football.

Meanwhile, another image shows Lucinda relaxing on a rattan garden chair on a decking area. Lucinda also tagged Brighton and Hove as the location of the snap.

But, a source has told to OK! it's "untrue to suggest Lucinda is anything but single".

The photos come amid reports that Lucinda rekindled her romance with Brighton and Hove Albion player Aaron before jetting to Mallorca.

A source has claimed to The Sun Online: "Lucinda and Aaron reconciled before she went on Love Island.

"No one wants to watch a dating show where the stars are really pining for lovers back home.

"Aaron was only too happy looking after Lucinda’s dog. It makes him feel like they are still the couple they are."

Lucinda had been caught in a brief love triangle between Aaron and bombshell Danny Bibby.

But, after an eventful game of Snog, Marry, Pie Danny and Lucinda called time on their budding romance. Moments later Lucinda and Aaron shared a passionate snog.

To stay up to date with the Love Island news and gossip, sign up to our daily OK! newsletter.