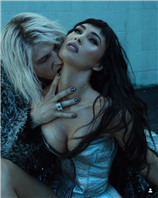 Just two short years ago, Machine Gun Kelly was a lesser-known rapper without a single major hit to his name, and Megan Fox seemed to have left the spotlight behind in order to focus on her family.

What a difference a couple of trips around the sun make!

These days, MGK is a best-selling pop-punk artist, and Megan is … starring in a movie directed by that Rand guy from Vanderpump Rules?

Hey, this isn’t about careers, it’s about clout — and Megchine might have more cachet than anyone else at the moment.

In fact, British GQ chose Megan and the Machine for the cover of their highly-anticipated fall fashion issue.

In other news, there’s a British GQ, and one of their annual issues is apparently some sort of big deal. Who knew!

Anyway, the photos that accompany the interview have garnered a lot of attention, and with good reason!

One cover shot finds Megan pointing a gun at MGK’s dong for some reason, and that image is probably especially shocking in a nation where the worst form of police violence is getting bonked over the head with a billy club, which they probably call a tally-whacker or something.

But for our money, the really bonkers thing about this story is the way that these two describe their relationship.

Goth theater kids who have committed the entire Twilight series to memory would roll their eyes at the self-serious corniness of Fox and Kelly.

Let’s start with Megan describing the couple’s aesthetic with a list of random words and phrases that sound like the findings from a CPS investigation:

Kinda weird to call yourselves outcasts when you’re literally on the over of GQ, but whatevs.

Anyway, believe it or not, the interview is even more ridiculous than the phrase “tantric night terrors.” Check it out:

Meg on their first meeting: “I just remember this tall, blond, ghostly creature and I looked up and I was like, ‘You smell like weed.’ He looked down at me and he was like, ‘I am weed.’ Then, I swear to God, he disappeared like a ninja in a smoke bomb.”

“I think we weren’t allowed to see each other yet. We weren’t supposed to run into each other that night, so our souls, our spirit guides, were luring us away from each other, because you literally had no face, like that thing from Spirited Away.”

Meg on MGK being her “soul’s mirror”: “I recognize so much of myself in him, and vice versa, and that locked-up part of me that I had put away. I’d always felt like there was that thing missing, that I’d given up on, that you’re always seeking.

“But then you meet the person that completes that for you and you’re like, ‘Oh, this is what my heart was searching for. That’s what that beacon was this whole time.'”

MGK on the “intensity” of their relationship: “It’s ecstasy and agony for sure … I don’t want people to think anything’s perfect with us. I didn’t say it was the darkest fairy tale for no reason.

“God help you if you would’ve met us last Saturday.”

Weed obsession, love of anime, talking about “spirit guides” and boasting about their insane fights in the same breath  … it’s official:

Meg and MGK will be standing outside the dining hall this semester asking you to swipe your card for them because they spent all their Campus Cash on Marlboro reds.

There’s too good a chance that they’ll sit with you and try to show you their matching tattoos.