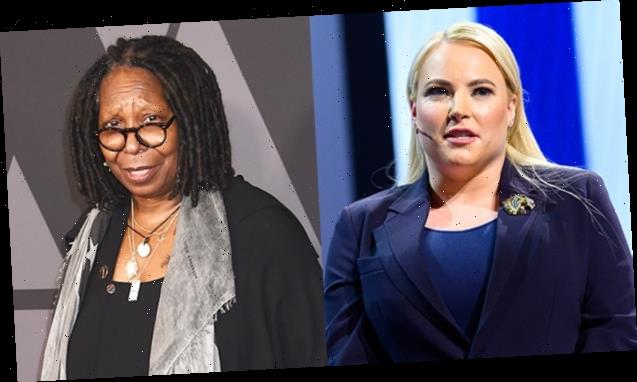 Meghan McCain’s 3rd day back on ‘The View’ included the new mom being cut off by Whoopi Goldberg during an interview with GA Senator-Elect Raphael Warnock.

It’s been an eventful week at work for Meghan McCain, who returned to The View on Monday following the birth of her first child in September. During the January 6 episode, Meghan was abruptly silenced by moderator Whoopi Goldberg while attempting to grill Georgia Senator-Elect Raphael Warnock about his stance on “packing the Supreme Court with more members.” — Before Warnock could reply, Whoopi chimed in to cut to a commercial break, which made Meghan appear visibly frustrated.

“We’re actually going to end this,” Whoopi said during the segment before she raised her voiced significantly. “Hey, listen!” she yelled, adding, “We’re going to thank the Senator-Elect Reverend Rachael Warnock.” As Whoopi concluded Warnock’s virtual interview, she was seen pulling on her ear piece while making confused faces.

The clearly unplanned, tense moment instantly went viral on social media, with some viewers tweeting that “Whoopi’s fed up” and Whoopi’s fighting with Meghan.” Other critics recalled Meghan’s tiff with co-host Joy Behar that occurred just one day prior. If you didn’t catch the episode, Joy told Meghan that she “didn’t miss” her while she was on maternity leave. 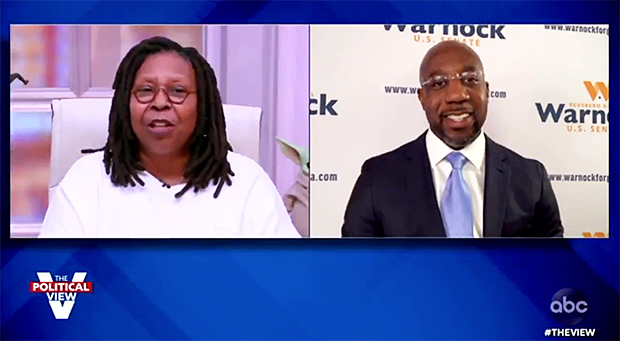 Despite the presumptuous tweets, it just so happens that Whoopi was dealing with technical issues — according to a Brian Teta, an executive producer on The View, who explained the situation later in the show.

“What happened at the end of Act 1, we didn’t have the Senator-elect for the beginning of the show, which threw everything off. Time was very, very long,” the producer said during the January 6 broadcast. “At the end of the act, I was yelling and several other people were yelling in Whoopi’s ear, ‘We have to go to break, we have to go to break,’ which made the segment a little bit short. And there was a delay and a bunch of other things,” Teta explained, confirming that there was “no issue here [and] no drama here — just our fault.”

Although things didn’t go as planned, Warnock was a good sport throughout his appearance on The View. On January 5, the longtime reverend and activist made history when he was elected the next Senator of Georgia — bringing the Democrats one step closer to controlling the House AND Senate in 2021. He will replace Republican senator Kelly Loeffler. The big victory makes Warnock Georgia’s first Black senator and the 11th Black senator in United States history! Additionally, if fellow Democrat Jon Ossoff wins his runoff election against Senator David Perdue, Democrats will take control of the Senate.