In an era of Hollywood relationship scandals, stars Melanie Griffith and Antonio Banderas, who star in The Mask of Zorro on BBC, appeared to be the pillar of hope for romance in the spotlight, despite their scandalous start. In 2014, the couple split after almost two decades of marriage with Griffiths noting the “marriage fell apart because I was stuck”.

By the early Nineties, Banderas was a rising star, having appeared alongside Madonna in her 1991 documentary and making his Hollywood debut the next year.

The son of a policeman and a school teacher was born in Spain and had seen some success in Madrid’s entertainment scene before moving abroad, so while he was not entirely inexperienced in the sector, he did not speak much English at the time.

The actor worked with an English tutor and translator, Ana Leza, who he ended up marrying in 1987 after just six months of dating.

Leading an entirely different life was Melanie Griffith, the daughter of hailed actress Tippi Hedren who had grown up on the sets of Alfred Hitchcock movies in the sixties.

The actress also admitted on Instagram in 2020 that she had also grown up with “lions, tigers and two elephants”, adding that the animals now live in her mom’s sanctuary. 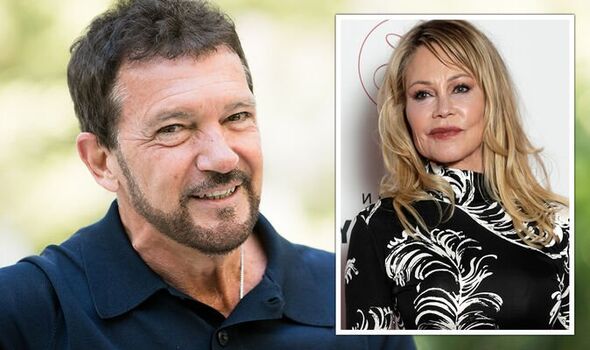 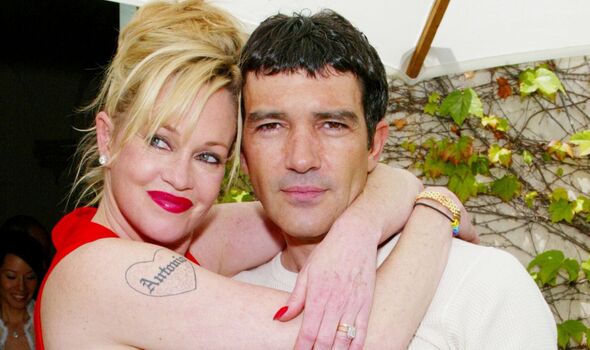 Griffith got her start in entertainment at just nine months old when she appeared in a commercial and by the time she was 12 she had landed the role of an extra in Smith!

Throughout the Seventies, Griffith enjoyed a successful feature film career and married fellow actor Don Johnson who was eight years her elder, ultimately their first union only lasted six months but they would later remarry in 1989.

Griffith and Banderas eventually crossed paths as they co-starred in the 1995 film Two Much, although at this time they were both married.

Banderas reportedly originally thought his growing affection for Griffith was a result of playing her lover in the film, but after filming wrapped it became apparent that their love was real.

Both actors got divorced from their spouses within a year, Griffith divorcing Johnson for the second time and Banderas enduring a difficult financial settlement with Leza. 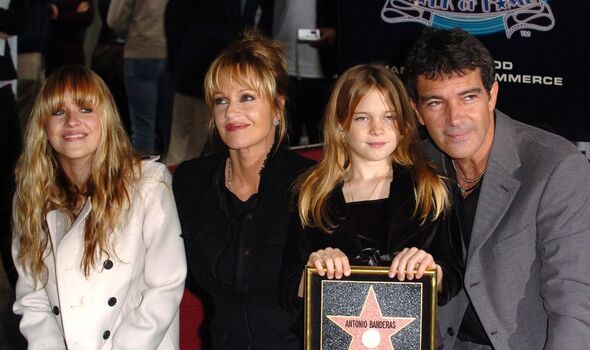 Nick Swift reported that Leza kept the couple’s worth an estimated €3.4million (£2.9million), received monthly alimony payments of €12,000 (£10,000) and was entitled to 50 percent of the actor’s film earnings from the pictures he made during their marriage.

While Banderas and Leza had no children together, Griffith was a mum-of-two at the time, having had her first child Alexander with actor Steven Bauer in 1985 and her first daughter, Dakota Johnson, in 1989 from her second marriage to Johnson.

In 2019, Dakota, now an acclaimed actress, recalled how much Banderas had changed the lives of her and her siblings while presenting an award to him at the Hollywood Film Awards.

The actress sweetly recalled: “He loved my mother and my siblings and I so fiercely and so big and so loud that it would change all of our lives forever.”

Banderas later revealed in an interview with Vulture that young Dakota had an adorable nickname for her stepfather: “Dakota called me Paponio, which is a mixture between papa, which is ‘daddy’ in Spanish, and Antonio. I am her Antonio papa, so Paponio.”

Soon after the couple got married they had their only child together, Stella Banderas Griffith, and Banderas was seemingly more than happy to step into a fatherly role.

In a 2011 interview with AARP Magazine, Banderas recalled: “Suddenly I had a six-year-old girl, a 10-year-old boy, and Stella came along almost immediately.

“I was, ‘Oh, my God! They needed solid ground in which they could grow. As soon as I realized that, I started establishing my relationship, giving them security, little by little doing the father thing.”

Despite outside influences, the happy couple and their three children seemed to be the picture of marital bliss for almost two decades, with rarely a scandal in sight. 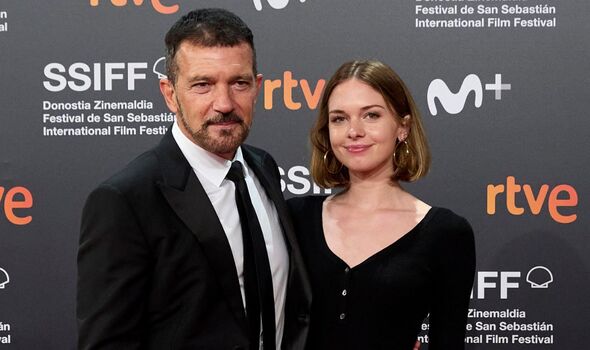 Then, in 2014, they publicly shared a joint statement noting their marriage was ending, which Sky reported as stating: “We have thoughtfully and consensually decided to finalise our almost twenty years (of) marriage.”

The split was undeniably amicable, as the statement noted they had made their decision “in a loving and friendly manner honouring and respecting each other, our family and friends and the beautiful time we have spent together”.

TMZ reported that Griffith had filed for divorce citing irreconcilable differences and that she was seeking joint legal custody of the 17-year-old Stella.

Banderas and Griffith are still notoriously supportive of each other, as the Mask of Zorro actor spoke about his ex in a 2019 interview with People: “Melanie is not my wife anymore, but I think she is my best friend. I love her and will love her until the day I die. She’s my family.”

Since their split, neither actor has remarried and their daughter took legal action last year to change her surname.

According to Hello Magazine, the 26-year-old filed a petition to drop “Griffith” from her name, changing her name to simply Stella Banderas.

The outlet reported that she made the decision as she does not usually use Griffith when filling out paperwork or referring to herself, noting that the change would “match my regular use”.

Antonio Banderas appears in The Mask of Zorro at 1pm on Channel 5.