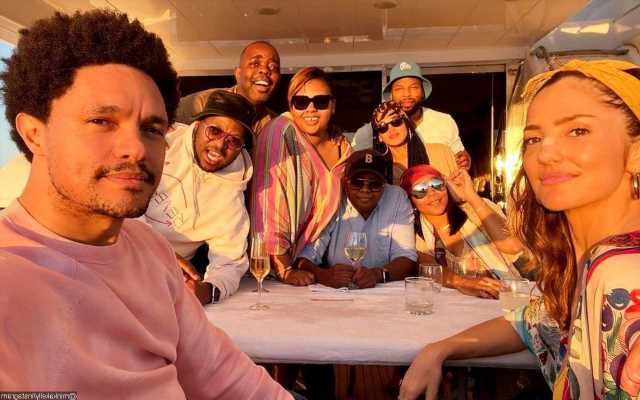 In a new photo shared on Instagram, the Dawn Granger / Dove depicter on ‘Titans’ is seen smiling to the camera while sitting next to her comedian boyfriend.

AceShowbiz -It looks like Minka Kelly really had a great time vacationing with Trevor Noah. Sharing the first picture of her and her boyfriend on social media, the actress portraying Dawn Granger / Dove on “Titans” gushed over their trip to his hometown of South Africa.

The 41-year-old beauty posted the snap in question on Instagram on Sunday, January 9. In the photo, she was seen sitting next to the comedian in a yacht as a group of friends posed behind them.

The photo saw Minka wearing a silky floral gown with Trevor donning a pink crew-neck pull-over. In the accompanying message, the former “Friday Night Lights” star raved, “Take a trip to South Africa. Find friends like these. Have the holiday of a lifetime. Thank you, Mzansi.”

More than a week prior, Trevor shared on his own Instagram page a photo of him with Minka from a birthday party of his best friend, Xolisa Dyeshana. “Happy Birthday @xolisadyeshana,” he captioned the photo. “May your laugh always be loud, maybe your stories always be long, and may your friends always be good looking.”

The twosome was unveiled to be in a relationship in August 2020 as they reportedly have moved in together to his place. The pair, however, allegedly parted ways in May 2021 before reuniting less than a month later.

Trevor and Minka appeared to confirm their reconciliation as they were spotted packing on some PDAs during a double date later that month. After enjoying dinner together, they were seen holding hands and staying close to one another while walking down the street.

In September, the lovebirds were caught on camera walking her dog together in New York City. They were seemingly in good spirits as they chatted during the outing while “The Daily Show with Trevor Noah” host held the dog leash nearly the entire stroll.