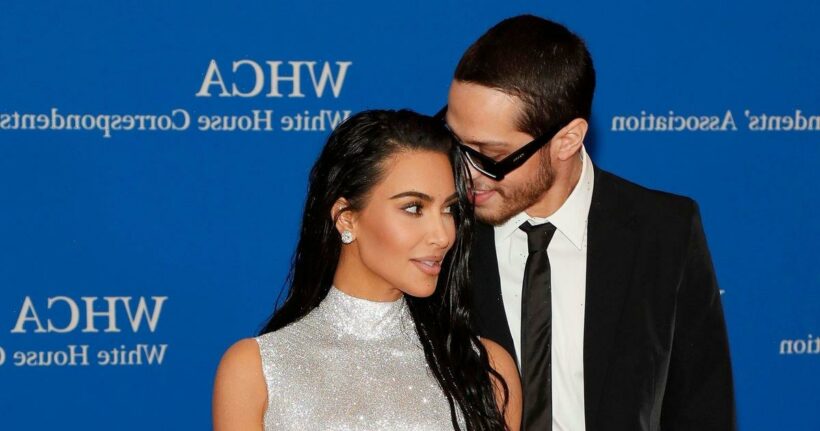 Pete Davidson has been accused by fans of staging his relationship with Kim Kardashian, 41, after new footage has been unearthed.

The Saturday Night Live star's intentions have come into question due to a "suspicious" move he made in a previous interview.

He's believed to have been in a relationship with the fashion mogul since October of last year after the pair met on SNL.

But now, a resurfaced clip where Pete, 28, chatted with PEOPLE in a virtual interview in February has left many fans concerned over his relationship.

In the clip, Kay Adams spotted a subtle gesture he had made to his new girlfriend in the background of the chat – after pointing it out Pete was left rather red-faced.

"Is that a Kardashian candle over your other shoulder? I've got good eyes," she proudly remarked.

Responding to the question, a rather embarrassed Pete said: "Yes, it is. That is. That is exactly what that is."

The video resurfaced on Reddit where eagle-eyed fans are now debating whether or not the candle was purposely placed in front of the camera to grab the interviewer's attention.

One user accused Pete of "staging" his romance with Kim.

They wrote: “The way the candle was placed was quite suspicious. It was the first thing I saw during the interview.”

While another commented: “He so obviously placed that candle in the view so the conversation would lead to his relationship with Kim. Authentic much?”

“Pete is living for the clout he’s getting from hooking up with Kim. This interview just proves it,” somebody else chimed in.

Earlier this month, Kim admitted that she never actually planned on getting in a relationship with Pete.

Speaking on Hoda Kotb’s Making Space podcast, the SKIMS founder said: “I think that, you know, sometimes things happen when you just least expect it. It was the last thing that I was really planning on.

“And so when it did happen, we were kind of like, ‘Oh my God, I wasn’t planning on this. And this isn’t even what I was thinking of.'"

Just recently, it was revealed that Pete finally met Kim's four children, despite the fact that Kanye West vowed he would never meet them.

At the time, a relationship expert warned OK! that: "The kids will already be going through enough with Kanye’s behaviour and ongoing media attention.

"Pete could really help matters by acknowledging and respecting both parents. Any attempts to disrespect Kanye would sabotage whatever he has with Kim, however much he may want to speak out about him."

For your latest lifestyle and showbiz news, sign up to OK!'s daily newsletter here