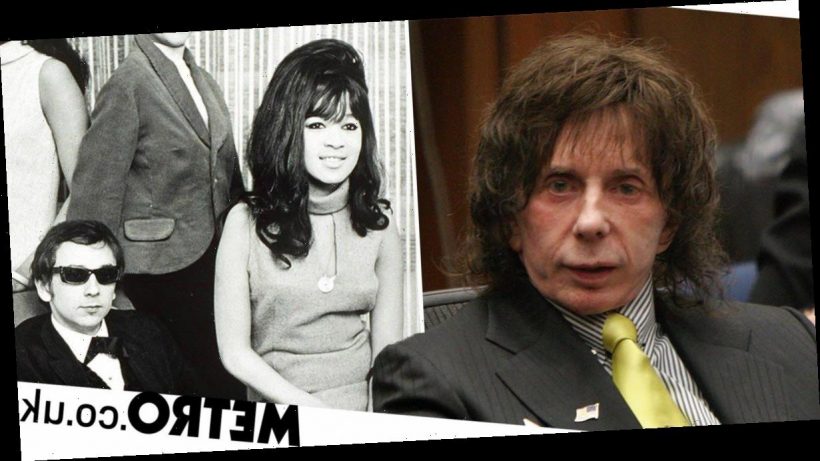 Convicted murderer Spector died on Sunday after suffering complications with coronavirus during his 19-year sentence.

His former spouse, Ronettes singer Ronnie, spoke out as the news broke and said it was a ‘sad day for music and a sad day for me’.

‘When I was working with Phil Spector, watching him create in the recording studio, I knew I was working with the very best. He was in complete control, directing everyone. So much to love about those days,’ she explained in an Instagram post alongside a throwback photo of them together in the studio.

Recalling how their relationship deteriorated, Ronnie, 77, continued: ‘Meeting him and falling in love was like a fairytale.

‘The magical music we were able to make together, was inspired by our love. I loved him madly, and gave my heart and soul to him. As I said many times while he was alive, he was a brilliant producer, but a lousy husband.

‘Unfortunately Phil was not able to live and function outside of the recording studio. Darkness set in, many lives were damaged.’

The legendary singer added: ‘I still smile whenever I hear the music we made together, and always will. The music will be forever.’

However, other celebrities refused to pay tribute to Spector in light of his conviction for killing actress Lana Clarkson, who he shot dead at his California home in 2003.

Country star Margo Price instead chose to highlight Spector’s treatment of Ronnie during their marriage and tweeted: ‘Congrats to Ronnie Spector for outliving her manipulative, abusive, murderous husband Phil, who held her hostage in her own home and forbid her to perform until she fled their home barefoot and escaped. if you haven’t yet, read her book, it’s one of my favorites.’

Ronnie and Spector were married for six years between 1968 to 1974.

In her memoir, Be My Baby: How I Survived Mascara, Miniskirts, and Madness, or My Life as a Fabulous Ronette, Ronnie opened up about the abuse she was subjected to during their relationship.

Ronnie also told Rolling Stone in 2016: ‘[Phil] took singing away from me and it was devastating because I had no idea that I would never record.

‘I had no idea I would never perform again, which was my life. I was in shock with that because here’s a person who wrote your records and produced them. … And then, you’re never gonna sing again. … I never knew “What goes around, comes around”, until he went to prison.

‘Then I knew what it meant. Because I was in prison in the mansion and I couldn’t even get out. For seven years, I didn’t go anywhere.’

Spector and Ronnie are parents to three adopted sons; Donté and twins Louis and Gary.

The music producer was first diagnosed with Covid-19 four weeks ago, when he was hospitalised for the first time. Initially he had recovered well and was released from hospital, before falling unwell again.

Following his death, a statement shared by the California Department of Corrections and Rehabilitation stated: ‘Phil Spector has died of natural causes in hospital.’