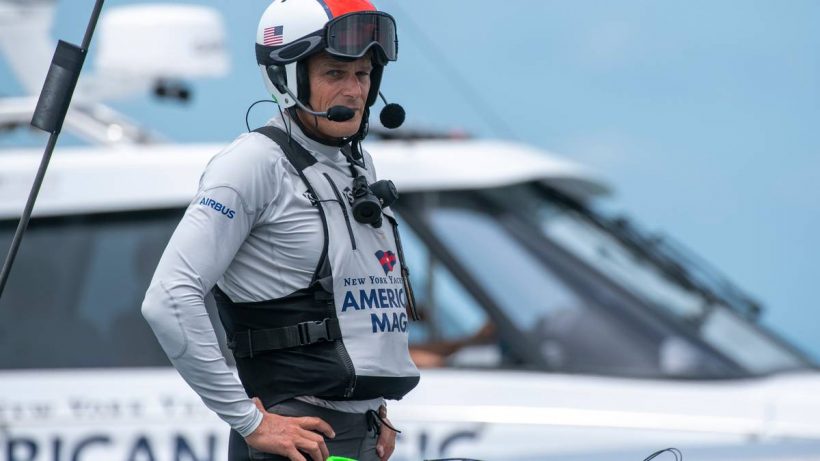 American Magic skipper Terry Hutchinson has refused to blame Kiwi helmsman Dean Barker for the team’s dramatic capsize on Sunday that caused substantial damage to their boat and has put the syndicate’s future in the Prada Cup in doubt.

The Americans have been licking their wounds since the tip in the second race of the day against Italian outfit Luna Rossa, a race Hutchinson and Co were leading comfortably before a sharp turn around the final mark in strong winds saw the AC75 lift out of the water before slamming back down.

Barker, who had come under fire during the first two days of the challenger series with American Magic failing to win a single race, cut a dejected figure while opposing syndicates, officials and police fought for more than three hours to save the boat.

Barker’s decision to attempt a precarious manoeuvre in high winds was questionable but, according to Hutchinson, the Americans “win and lose as a team”.

“Dean’s a critical part of that [the team]. I’ve encouraged him since we started this program – just be Dean Barker, don’t be anything different. We want the person that has all the intensity he has but also has a certain level of demeanour about him, which makes him the perfect person to sail this boat. He has a little ice water in his veins, which is what the boat requires,” Hutchinson told a packed press conference on Monday.

“When we got out and go sailing the next time, I’ll always encourage him ‘don’t take your foot off the pedal’. We have as a team the utmost confidence in him and his abilities. From my perspective there’s no one else we’d rather have on the wheel than him.”

Hutchinson says the conditions changed constantly during the race which made things immensely difficult.

“You get the boat into a spot where you have to race the boat hard, the boat is very unforgiving… when you throttle back you’re at as much risk when you pull your foot off the gas pedal as when you have it on it.”

The skipper shed some further light on the communication on board just before the fateful tack.

“Coming into the mark there’s a lot of discussion around the right gate being favoured. You hear Dean saying ‘well, we should tack bear way’ and you hear Goodie [Paul Goodison] say ‘it’s a hard manoeuvre’, and then you hear Andrew [Campbell] say ‘right gate by 100 metres, but really light’,” Hutchinson says.

“I trust Andrew and Dean as we all do… we trust them with our lives, when one of those guys makes a comment and you hear him in his tone about being light, you take him seriously.

“Interestingly enough, Luna Rossa followed us around the left gate, so there must be something to it when you’re sitting there and looking at the breeze.”

Hutchinson is confident in the team picking themselves up, saying they have “an incredible amount of resolve to it” and they’re “going to do whatever it takes”.

Hutchinson says the hole in the hull, which led to the boat filling with water and dangerously close to sinking, was caused by the way it slammed on the water afteressentially flying up amid the gusts, where”the structure inside the yacht just guillotined the panel”.

The team will utilize the carbon body of their first boat Defiant to patch up the hole on Patriot, Hutchinson said.

American Magic’s hopes of getting any time on the water before the Prada Cup semifinal is minimal. Hutchinson anticipates it will take eight to 10 days to fully repair the boat, which will see them miss next weekend’s final round robin races. The semi is 11 days away.