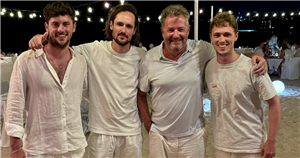 Piers Morgan and his sons have channeled their inner 90s boyband as they modelled matching all-white ensembles on their current holiday.

The 56 year old and his family are currently holidaying in Antigua, but have suffered a fashion blunder as they posed for a hilarious photo in their uniformed outfits.

Former Good Morning Britain host Piers took to social media to share the image of himself stood alongside Stanley, 24, Spencer, 28, and Bertie, 20.

Each family member smiles for the camera in the shot, shared with the controversial presenter's 1.7million Instagram followers, as they throw an arm around one another.

However, followers of the Life Stories host were more distracted by the family's creased clothing than their boyband look.

One person commented: "You're right .. you all look as if you have slept in these clothes for weeks."

A second added: "Does anyone have a iron," with a third asking: "No iron at the resort????"

Piers has shared a number of snaps from his and his family's trip to the eastern Caribbean island.

The father of four previously shared a snap of the sunset from his bed at the luxurious villa, captioned: "Current view. As my sons would put it… ‘not too shabby'."

He also gave fans a view of his tropical location as he panned to the beach from the rooftop of the villa, and penned: "Good Morning Antigua".

His eldest son Spencer also gave his followers a peek inside the sprawling villa as he posed in the infinity pool which overlooked the idyllic white beach and turquoise sea.

The sports journalist, who has 40,700 Instagram followers, wrote: "Reopening rehab."

Elsewhere, Spencer also shared a snap of a second pool to his social media alongside the scorching temperature of 30C.

He also shared footage of his stroll on the powdery white beach before zooming in on his younger brother Stanley.

For the latest updates on Piers Morgan, sign up to OK!'s daily celebrity newsletter.