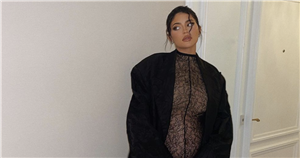 Kylie Jenner has announced plans to launch a line of baby products just one week after revealing she is pregnant with her second child.

The 24 year old has launched an Instagram page for her new venture, named Kylie Baby, and announced that her project will launch later this month.

Her new business page has already racked up an impressive 963,000 followers, with nine posts made featuring pink clouds and the beginning of a blue sky.

In the centre of the profile, a post reads: "Kylie Baby by Kylie Jenner," with a later post featuring the launch date of 28 September.

Fans took to the comments section of the posts of the pink clouds, which were presented with no context, to predict the former Keeping Up With The Kardashians star would be welcoming a baby girl and naming her Cloudy.

Once it became apparent that Kylie's next venture would be a range of baby products, fan voiced their excitement over what could be included, speculating baby clothes and beauty products amongst others.

Kylie first hinted at the new business back in June, sharing a photo of her three year old daughter Stormi in the bath.

She captioned the adorable image: "bath time with @kyliebaby."

According to Insider, Kylie filed a patent to trademark Kylie Baby the same week as the cute upload.

The patent application included plans for skin and hair-care products to baby carriers, strollers, and cribs, as well as baby vitamins and diapers, according to the United States Patent and Trademark Office's website.

Last week, an eagle-eyed fan thought they had worked out Kylie's due date for her second child thanks to a clue from her mum Kris Jenner's pyjamas.

A super sleuth Reddit user took to the platform to write: "Okay guys, I'm looking at the colorful PJ's Kris is wearing in Kylie's announcement video.

"Kris is wearing them when Kylie tells her she's pregnant, and I'm presuming this was around week 6 of Kylie's pregnancy.

"Kim posted the pic linked above in her Mother's Day story on May 9th, it was a video of Kris opening presents so she was wearing those pajamas that day.

"It would also make sense that Kylie would tell Kris on Mother's Day as her gift!," the fan continued.

"If this was ~week 6, the first day of Kylie's pregnancy would've been March 28. This puts her at about 23 weeks along, making her due date January 2!"

For the latest updates on Kylie and her pregnancy journey, sign up to OK!'s daily newsletter.