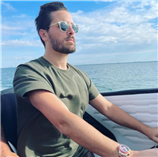 It’s only been two months since Scott Disick got dumped by Amelia Hamlin.

But if you thought the guy would remain single for very long following news of Kourtney Kardashian’s engagement … well, you don’t know Scott.

It’s unclear if Kourtney and Travis Barker have set a wedding date, but it’s obvious that Scott’s not taking any chances.

Those two could get hitched any day now, and Disick is not gonna run the risk of receiving the news while lying alone in an empty bed.

And so, Scott is looking for something more than a simple rebound fling:

He’s looking for the kind of relationship that will spark tabloid headlines about how deliriously happy he is with his new boo.

In other words, he’s looking for the kind of relationship that Kourtney has.

Needless to say, that’s not the sort of mission one accomplishes over night, but with all the secrecy surrounding Travis and Kourtney, Scott doesn’t have the luxury of waiting around.

These two could be exchanging vows right now for all we know!

Anyway, Scott has no time to waste, which might explain why he’s been cycling through partners at breakneck speed.

Last month, it was reported that Disick was dating Elizabeth Grace Lindley, a model who’s either 20 or 23 years old, depending on who you ask and who you believe.

Obviously, Lindley is a lot younger than Scott, but she’s also much older than Scott’s previous girlfriends.

So the news that Scott and Elizabeth had parted ways didn’t come as much of a surprise.

But the news that followed was an absolute shocker:

According to a new report from People magazine Scott appears to be dating Hana Cross.

The pair was spotted leaving Malibu hotspot Nobu on Monday, and onlookers say Scott and Hana left little doubt that they were on a date.

Again, there’s nothing surprising about the fact that Scott and Elizabeth’s relationship flamed out in a matter of weeks.

And there’s definitely nothing shocking about the fact that Scott moved on with apparent ease.

But the fact that his new paramour is a bonafide grownup who can legally purchase an alcoholic beverage anywhere in America?

Scott’s new dating strategy might reflect his desire to send a message to both Kourtney and the media that he’s done some growing up of his own in recent weeks.

“He was pretty shocked about it. He has slowly been dating, but is not serious with anyone,” a source told People of Disick’s initial reaction to his ex’s new relationship.

“He seems good though. He is around for his kids a lot. He loves spending time with them.”

The insider says that Scott is still not happy about the engagement, but is doing his best to come to terms with it.

“Scott never approved of Kourtney dating Travis. He has struggled with their relationship,” the source said.

“He always had this idea that he and Kourtney would eventually get back together. He was pretty shocked when he found out that she was dating Travis.”

And it seems that in the meantime, Scott will be seeking solace with a succession of increasingly older models.

Hey, at least he’ll have a date on the off-chance that he gets invited to the wedding!