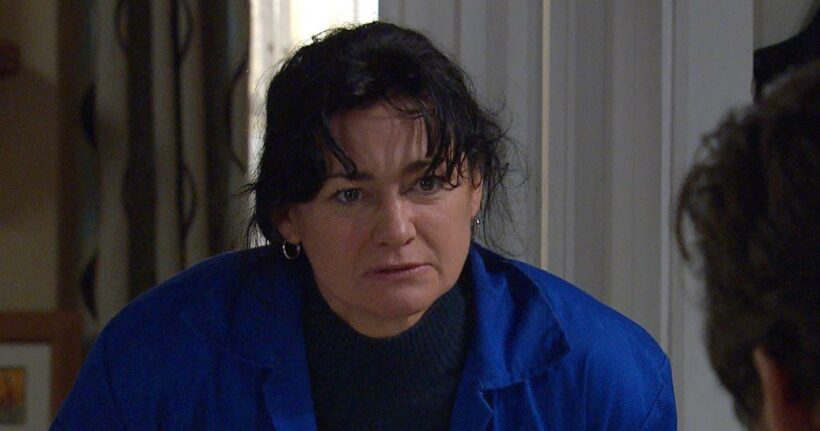 During the episode, the feisty farmer, played by Natalie J Robb, was left furious after Paddy Kirk and Chas Dingle hid Kim Tate's stolen race course up at her farm.

Entering The Woolpack pub, Moira fumed: "Why is there a stolen race horse in my barn are you trying to get me arrested?"

To which Chas explained: "Oh, it won't come to that. We just need somewhere to hide it while negotiating with Kim."

However, soap fans were left distracted during the scenes and were left amazed over Moira's makeover.

The character is typically seen in overalls with her hair scraped back but during Tuesday's episode she wore her brunette locks loose with a slick of glamorous make-up.

Taking to Twitter, one person said: "Farm worker moira looking like she's just got back from a photo shoot #emmerdale."

A different account put: "Blimey, Moira’s had a makeover! #emmerdale."

Another viewer penned: "Has Moira done something different to her hair? Looking good! #Emmerdale."

Later during the episode, Kim, played by Claire King, decided to leave the village after Will (Dean Andrews) confronted her over her behaviour towards Chas and Paddy.

During a heart-to-heart, Kim, who has been mourning the loss of her son Jamie Tate without knowing he is actually alive, admitted she needed some time away before committing to her relationship with Will.

After realising she was leaving, Will declared: "I thought I meant something to you?"

Kim insisted that he did, hence the decision to leave before she "ruins things", she added: "I just need time to think, maybe we both do?"

After Will insisted he would wait for her, Kim admitted: "I need to work out if I can live with myself before anyone else."

Later in the episode, Bernice poured herself a drink with Will at Home Farm where she said: "I never thought I'd see the day where Kim Tate has better taste in men that me. Kim's lucky to have you…

Bernice then put her hand on Will's arm to which he pushed her away, insisting: "Sorry, I think you've got this wrong! I'm with Kim, yeah?"

With Bernice replying: "I wasn't trying to grope you! Obviously, I was just being friendly!"

Soap watchers have already predicted that Kim will get "revenge" after Bernice made a move on her man Will.

Emmerdale continues on weekdays at 7pm on ITV.

For all the latest cast updates and juicy Emmedale spoilers, sign up to our daily OK! Newsletter .