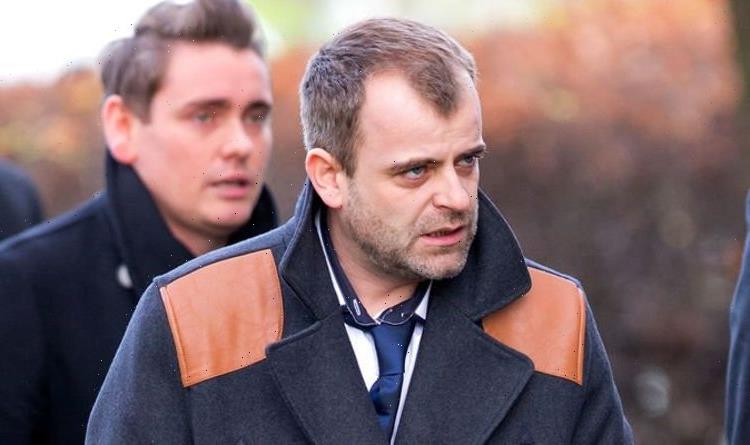 Tonight, Simon will be hoping he is crowned the new king of Gwrych Castle in the final of, I’m A Celebrity… Get Me Out of Here! He, singer Frankie Bridge and Emmerdale actor Danny Miller are the last three left after footballer David Ginola was voted out last night. All three were visibly shocked when it was announced that the public had picked David to leave the castle — the Frenchman has been the bookies’ favourite to win.

Simon entered the castle as a latecomer along with Eastenders star Adam Woodyatt.

Having received 17 awards for comedy and performance, as well as a Legends of Industry Award, Gregson has played McDonald continuously since 1989 when he was just 15 years old.

Not one to divulge details of his private life, in 2019, he took to Twitter and opened up about his battle with anxiety.

Describing it as a “hidden” condition, he said it was “awful” and difficult to get a handle on.

He said: “It’s a hidden, awful emotion but it’s treatable and manageable with the right help.

“Tablets work differently for different people, mine worked with therapy.

“You need to find the right one for you.

“Life is complicated, enjoy, embrace and love each other.”

JUST IN: Jeremy Clarkson dig to Lewis Hamilton ahead of Formula One final

While many fans were surprised at the admission, it was not the first time Gregson had opened up about mental health.

In 2015, he was signed off work for an undisclosed illness, which he later revealed was depression.

However, in 2017, he said he was the happiest that he had ever been, and noted: “I had to pinch myself the other day – a beautiful wife and three beautiful kids who are hilarious.”

Many people suffer from anxiety and depression in the UK and around the world.

The NHS says the most common signs of anxiety include:

The symptoms of depression, meanwhile, can be complex and differ from person to person.

The NHS lists the psychological, physical and social symptoms:

Psychological symptoms of depression can include: continuous low mood or sadness, feeling hopeless and helpless, having low self-esteem, feeling tearful, feeling guilt-ridden, feeling irritable and intolerant of others, having no motivation or interest in things, finding it difficult to make decisions, not getting nay enjoyment out of life, feeling anxious or worried, having suicidal thoughts or thoughts of harming yourself.

Social symptoms can include: not doing well at work, avoiding contact with friends and taking part in fewer social activities, neglecting your hobbies and interests, having difficulties in your home and family life.

If you think you have depression or anxiety you should see your GP.