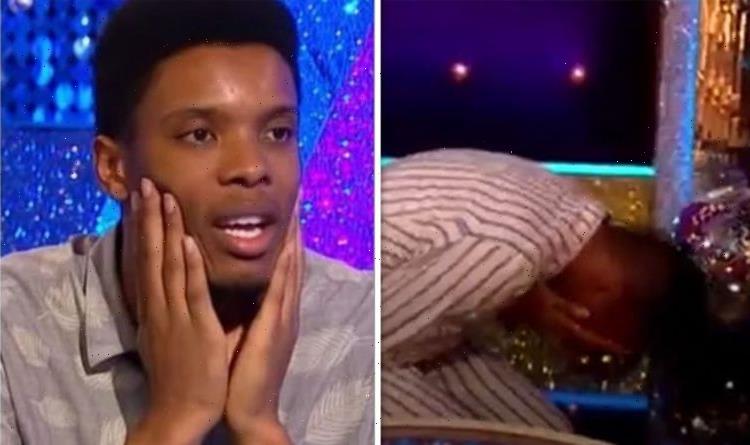 Strictly: Rhys collapses after getting a score of 40

CBBC presenter Rhys Stephenson and his partner Nancy Xu achieved a perfect score of 40 tonight for their Charleston. The young Strictly couple, who are usually seen joking around on their Instagram stories, were noticeably emotional tonight after their hard work paid off.

Rhys, 28, performed a demanding Charleston routine with professional partner Nancy, 30, which was so impressive that every judge gave them a 10.

Strictly host Claudia Winkleman noted that their dance marked the earliest time in the competition that anyone has ever received a perfect score for the Charleston.

As Craig gave the first 10, Rhys could be seen sinking to his knees and hugging Nancy as he cried out “oh my god!” in shock.

Then, as the children’s presenter realised he had received four 10s, he fell to the floor with his head in his hands.

READ MORE: ‘Get on with it!’ James Martin fumes at Remainers as Brits ‘kick off’

This prompted Claudia to ask: “Are you alright, baby?”

Rhys appeared speechless for a few seconds before saying: “It had to be that one, didn’t it? I mean it’s the most CBBC dance out there.”

The pair performed a very classic Charleston routine to the song The Charleston by Bob Wilson and his Varsity Rhythm Boys.

As Claudia wrapped up their interview segment, she added: “He is so emotional”.

Rhys appeared to be on the verge of tears as his partner Nancy embraced him.

“And I know deep inside his heart he just wants to make everyone proud of him.

The star had previously referenced the difficulty of this dance on his social media feed.

On Thursday Rhys shared a photo of himself starfished on the floor with his 22,400 Instagram followers.

In the picture, the children’s TV presenter looks wide-eyed, while lying next to a pair of his shoes.

The star also notably has multiple holes in both of his socks.

“Do the Charleston they said, it’ll be fun, they said, you definitely won’t burn the heels off your socks they said,” Rhys wrote under the picture with a laughing emoji.

Last week, the dancing couple appear to be getting on like a house on fire, impressing the judges enough to land in fourth place on the leaderboard.

They performed a show-stopping quickstep to What A Man Gotta Do by Jonas Brothers, earning two nines from the judges and an overall score of 34.

Strictly Come Dancing: The Results returns tomorrow night at 7:20pm on BBC One.