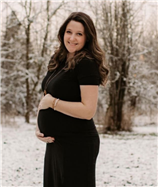 Tori Roloff has been an open book for nearly the entire duration of her time in the spotlight.

The Little People, Big World star has amassed an Instagram following of over 1,000,000 people by sharing all aspects of her personal life, including details of her pregnancy.

She even admitted a short time ago to insecurities over her growing body.

But here’s the thing:

Roloff hasn’t updated her social media page since April 1, sharing a GIF at the time of her son, Jackson, and daughter, Lilah, looking at the snow.

Prior to that post, the expecting TLC personality uploaded a message on March 24 and prior to that… you need to go all the way back to March 10, when Tori reflected on her miscarriage and shared a picture of her baby bump.

Why has Tori gone quiet?

We can’t say for certain, of course, but the brief hiatus has prompted a great deal of speculation among fans and followers.

A handful of folks across the Internet think Roloff has already given birth to baby number-three.

They think she’s taking some time to just be with the baby and block out all outside concerns and will let everyone know about the child’s arrival on her own schedule.

Back in November, though, the star announced she was pregnant, revealing to fans that she expected the baby to arrive in “Spring 2022.”

Then, the following month, Tori flaunted baby bump in a long black dress and wrote: “”…and we’re half way there!”

Following this general timelime, Roloff would be due in May.

Did she go into labor early? Is she still pregnant and simply resting peacefully at home, taking a social media break before her life gets thrown in the blessed upheaval of new parenthood?

Tori has said on more than one occasion that she’s grateful to be expecting, but also grew candid several weeks ago.

“This pregnancy, it’s been so difficult to get excited.

“However, we have seen a baby multiple times and we’ve heard his/her heartbeat a ton. And it’s strong.”

As for the show on which Tori and her husband star?

Little People, Big World will be returning with new episodes on Sunday, May 17.

The Roloffs face big changes and challenging times as a rift in the family causes an unexpected divide that sparks the beginning of a new and very different chapter.

Amy and Matt continue to find friendship in unexpected ways as the two, along with Chris and Caryn, spend more time together and even share a trip to Arizona.

And, when the negotiations fall through, Zach and Tori decide to move and make their new home away from the farm while also expecting their third child.

And in the midst of everything, Matt makes a decision that could change the farm – and the family – forever.

There are 10 new episodes this season.