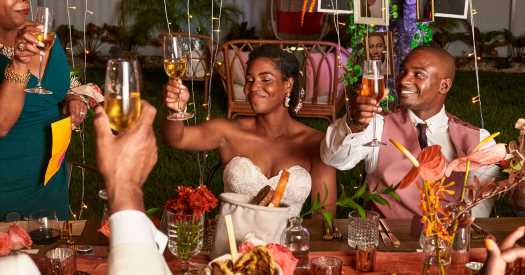 Jamila Ross and Akino West both work in the food and hospitality business, but that’s pretty much where the similarities end.

When the pair, who had dated off and on for several years before becoming a couple, opened the Copper Door Bed & Breakfast in Miami in 2018, their schedules were grueling. “We were at it 24/7,” Ms. Ross said. “Our differences were not situational, but there were times when we didn’t want to be near each other.”

Both 29, Ms. Ross is the more creative of the two; Mr. West is methodical. She is chatty and outgoing; he is more reserved.

Being in close quarters while taking care of others proved to be somewhat challenging.

“I didn’t always agree with her vision and vice versa, but we learned that one of us had to let go and be the bigger person,” Mr. West said.

The couple met in January 2013 while culinary students at Johnson & Wales University in North Miami. One day, as he was set to drive away from campus, she complimented his black BMW.

“I introduced myself and we had a short chat,” said Ms. Ross, who grew up in Yonkers, N.Y. She earned an associate degree in restaurant, culinary and catering management from the Culinary Institute of America in 2012, and a bachelor’s degree in hospitality management from Johnson & Wales in 2015. “He was shy, but I liked how he presented himself,” she said. “I thought we were on the same page.”

Born and raised in Riviera Beach, Fla., Mr. West thought Ms. Ross had a “beautiful smile” and asked for her phone number. After texting for a few days, she initiated a dinner date. Over comfort food at Yardbird Southern Table and Bar on South Beach, they had a fun culinary debate, but didn’t agree on much.

“They didn’t match at first because their personalities are so different,” said Reggie Napier, 28, Mr. West’s best friend.

Ms. Ross thought Mr. West was cool, and he was attracted to her bubbly personality. But each was guarded after past relationships. Ms. Ross had learned of a recent boyfriend cheating; Mr. West was hurt when the parents of a former girlfriend, who was Puerto Rican, said they didn’t want their daughter to have “a Black baby.”

They dated casually for a few months before Ms. Ross, who also worked as a manager in training at the SLS South Beach hotel, was offered a restaurant supervisor job in Kuwait and Dubai by the parent company sbe in the spring of 2013. She accepted the job and left college temporarily.

Not long after, Mr. West, who was a chef at Michael’s Genuine Food and Drink restaurant in Miami’s Design District, took an internship at the Copenhagen restaurant Noma.

“We had challenging and rewarding experiences that were steppingstones for our careers,” Ms. Ross said of working overseas separately. The two lost touch.

In 2016, after each had returned to Miami, Ms. Ross texted Mr. West, who had completed his bachelor’s degree in food and beverage management from Johnson & Wales. They met for a casual dinner.

[Sign up for Love Letter and always get the latest in Modern Love, weddings, and relationships in the news by email.] 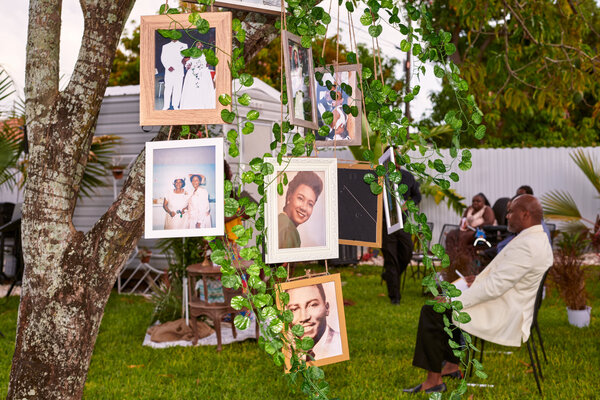 “I was into him even though I once said I would never date a chef because our industry is so cutthroat and high-tempered,” she said, laughing. “But he was different and silent, a young guy who knew what he wanted and already excelling in his career. That was sexy to me.”

Mr. West said he “was excited to see Jamila. She was cute and outgoing, and I liked her build and hair.”

Romance came quickly. Mr. West was transitioning to a new job as luncheon sous chef at Verde in Miami’s Pérez Art Museum, which was close to where Ms. Ross lived. He came over nearly every night, eager to share an elaborate meal after a long day. “I enjoyed showing off my cuisine, and since Jamila was also a foodie, she seemed very honest about assessing the quality,” he said. “We showed our love through food.”

In 2017, Ms. Ross moved into Mr. West’s house near the Aventura section of Miami. “I had to get used to living in someone else’s home,” she said. “Akino said it was ours; I said it was his. We didn’t communicate enough about our problems.”

Mr. West would unwind from work by playing the video game “Call of Duty” at 1 a.m. in their bedroom. Ms. Ross, who also had a full-time job, couldn’t sleep.

“I told her this is what I do, it allows me to yell, get away and reconnect with friends,” Mr. West said. “But we finally compromised, and now I have my own gaming room.”

They also argued about Ms. Ross leaving her hair products in full view, and not rinsing off the soap after a shower. “I tried to be neat, but he is neater,” she said.

“They bump heads like two bulls,” said his mother, Katrina West. “But Jamila and Akino have the same standards and goals, so when they disagree they end up working it out.”

It didn’t take long for the couple to start working together. In 2017, after a stint managing three South Florida Airbnbs, they bought and ran their own Airbnb in Miami’s Buena Vista neighborhood. (They made it their home in April 2020.)

“I was more able to connect with Jamila on a deeper level than I had with any other woman,” Mr. West said. “When I am with her I can be myself.”

On New Year’s Eve, as the year turned to 2018 and the couple watched fireworks from the beach, Mr. West got down on one knee and proposed. Ms. Ross wept and said yes.

“Akino has made me a better person,” she said. “I thought I was together, but he showed me ways to improve. I have become more confident in public speaking and dealing with others because of his love and support.”

Six months later, Ms. Ross and Mr. West bought and renovated an old Overtown building in which they planned to open the Copper Door Bed & Breakfast. Ms. Ross was handling the business side, and Mr. West cooking and running the kitchen; they found themselves too busy to plan a wedding.

They did, however, find time to start seeing a therapist in 2019. “With our different styles, plus working together for much longer hours than ever before and also living together, the counseling was necessary to help us communicate and compromise,” Ms. Ross said.

“Akino and I have grown independently and together, and are glad that we didn’t wait until age 50 to build our dream. We love working in a Black-owned area that we are helping to revitalize.” (Overtown was considered the “Harlem of the South” in the 1940s to 1960s.)

As Copper Door was booming — they were fully booked for Miami’s Ultra Music Festival in March 2020 — the coronavirus forced them to close. But putting the business on pause had an upside: “We slowed down and got to know each other even better,” Mr. West said. “We had synergy and gave the other the attention we needed to help us handle challenges more maturely.”

In April 2020, the couple opened Rosie’s pop-up restaurant in a food trailer on the side of the bed-and-breakfast. Four months later, after receiving a $25,000 grant from Discover Card that had allotted $5 million to help Black-owned restaurants, they were able to add additional service for outside seating, stands and landscaping.

They received another grant, this one for $10,000, after submitting a video essay to Beyoncé’s BeyGood Foundation, which collaborated with the N.A.A.C.P. to help Black-owned businesses during the pandemic. Mr. West and Ms. Ross paid their good fortune forward by partnering with charities to feed those in need, including World Central Kitchen founded by José Andrés.

“By learning how to identify the other’s weaknesses, they solidified how they feed off each other to survive and thrive in times of need,” her mother, Rosa Walker, said.

On May 15, after a three-year engagement, the couple were married in the garden behind their home in Miami’s Buena Vista neighborhood. Marva McKenzie, their therapist, who became a Universal Life minister for the event, officiated before 16 guests. At least 100 more attended virtually.

The bride and groom expressed their allegiance to each other in their vows.

“I will work hard to understand your desires and make you happy,” Mr. West said while wearing a custom suit from Men’s Designer Outlet.

“Over the last six years you have shown me the meaning of true courage. This is exactly who you are,” said Ms. Ross, who wore a beaded and embroidered ivory strapless gown by Anne Barge.

After the ceremony, the newlyweds left with their two dogs, Buddy and Ace. Guests cheered and threw confetti.

“I am thrilled for them,” said the bride’s father, Richard Ross. “Akino’s patience, kindness and steadfastness perfectly complements Jamila’s frenetic energy and sparkle.”

Where In a tropical garden behind the couple’s home in the Buena Vista neighborhood of Miami.

Chef Selections With a Moroccan dinner theme, the chef Jason Arroyo, a former colleague of the groom, prepared a dazzling array of entrees, including Za’taar roasted chicken with warm barley salad, apricots, toasted almonds and olives.

Dessert A two-tier lemon cake with a layer of preserves and elderflower buttercream.

Love Notes At each place setting, the couple left guests a special message: “Our journey commenced with a mutual passion for culinary. We find our love together in creating an experience with socialization, labor, fire, water and earth. We feel blessed to break bread with you today, and will remember this first meal as a union with you forever.”