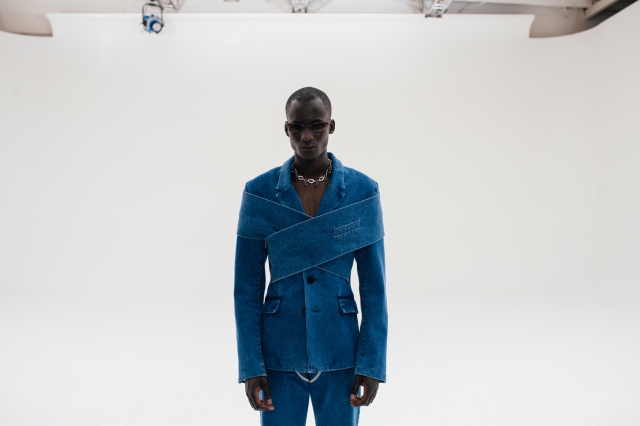 Diversity has always been at the root of the GmbH label, with founders Benjamin Huseby and Serhat Isik mining their multicultural backgrounds with strongly autobiographical collections. This season, the duo turned the tables with a lineup that riffed on bourgeois tropes and WASP culture.

“We wanted to shift the conversation. Instead of always focusing on our own Black-ness or brown-ness — being the ‘other’ — we wanted to talk about whiteness,” Huseby explained. “We definitely wanted to create a conversation that might make some people uncomfortable.”

The collection, titled “White Noise,” is a wry comment on the ruling class, viewing yuppie staples like jodhpurs, polo shirts and riding boots through a queer lens. Varsity vests were ruched to expose the midriff, while Western shirts came tied at the waist to show off silver belly chains. A striped dress shirt was inset with panels of corset lacing.

The designers reprised the shawl constructions they introduced last season, but gave them a lighter spin in fabrics like denim, or baby pink and blue fake fur, paired with shredded jeans.

They were inspired by scenes in the documentary “Paris Is Burning” showing Black and Latino ballrom dancers competing in bougie Town and Country outfits, as well as the way music stars in the ‘90s were appropriating and subverting white culture. “Fashion is a kind of drag, so no matter what you wear, you’re dressing up for a role, even if you’re subconscious about it,” Huseby said.

In contrast with most brands’ reluctance to comment on the Israeli-Palestinian conflict, GmbH has collaborated with Palestinian fashion label Trashy Clothing on a halter top that reads: “Free Palestine.” Proceeds will benefit charities including Al Qaws, the oldest official Palestinian LGBTQ organization.

Despite the risk of backlash, Isik, a German of Turkish descent, believes fashion needs to address political issues.

“Ten years ago, pre-identity age, my graduate collection was about Islamophobia. The collection was called I Don’t Have Any Weapons, and I was barely allowed to defend my thesis at the university. And now we’re here, and we are in the positions that we are,” he said. “We have to continue being brave and talking about these things.”

Huseby and Isik were recently named creative directors of Italian brand Trussardi, which touted their “socially engaged perspective.” This collection proved they won’t be toning it down to court mainstream acceptance.