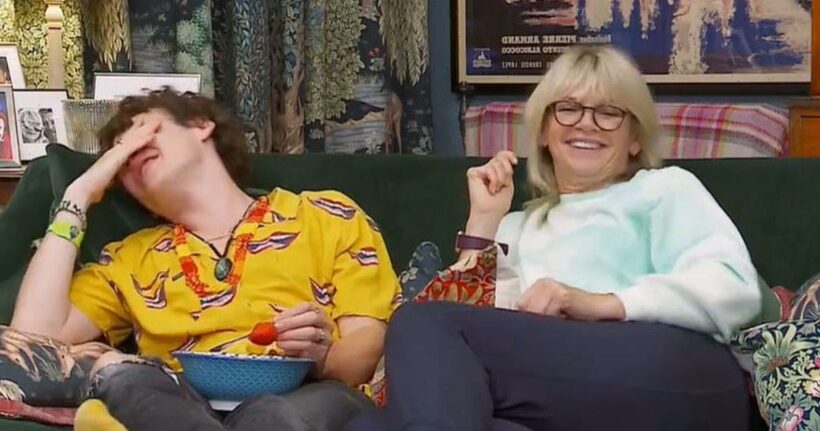 Zoe Ball’s son Woody probably thought appearing with his famous mum on Celebrity Gogglebox would be a fun thing the pair could do together. However, the poor lad was left mortified as his mum quizzed him about self-pleasure as they watch a steamy Netflix reality show for the Channel 4 show.

The mother and son were featured on Gogglebox watching Too Hot To Handle, which features 12 singletons who are sent to an exotic island but are forced to stay celibate for their entire time on the show.

The conversation on the steamy Netflix show got a little uncomfortable as one of the Cam Holmes told his pals in the house he needed to pleasure himself, despite this not being allowed under the show’s rules.

The embarrassing scene got quite uncomfortable when two of the lads in the show went on so-called "w**k watch" for Cam as he relieved himself away from the other contestants.

Despite being against the rules, the Wales-based model Cam told his mates he couldn't wait any longer.

He confessed to his mates: "You know my balls are in a dire situation."

Being the good friends they are, Cam'd mates then stood guard as he went into the bathroom to relieve himself.

An embarrassing situation to sit and watch with your mum for any lad. But, the cringe-fest got worse for poor Woody, 20, when his mum Zoe, 50, turned around to her son and said, “Effectively he hasn’t pleasured himself in so long his balls are swelling up.”

Zoe then turns to Woody and quite seriously asks her son, “Do you have to empty them? I’m a girl I don’t know.”

The Circle star Woody was clearly embarrassed but attempted an answer anyway. The 20 year old began mumbling something about monks and being celibate as his mum looked on appearing interested in her son’s response but Woody eventually threw his hand over his face and saying, “I don’t want to have this conversation with you.”

TV favourite Zoe burst out laughing at her son’s response. And, despite being totally embarrassed, Woody could be seen smiling under his hand.

Gogglebox viewers felt for Woody as he squirmed at the question from his mum. They took to Twitter to have their say about the cringy mum and son conversation, although many found it hilarious to watch.

One said, “This was too funny. Poor Woody, bless him.”

Another added: "Another reason why I love Zoe Ball that poor boy!!"

While a third said: "Zoe how could you? Poor Woody does not want that conversation with his Mum!"