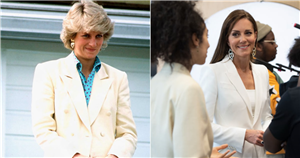 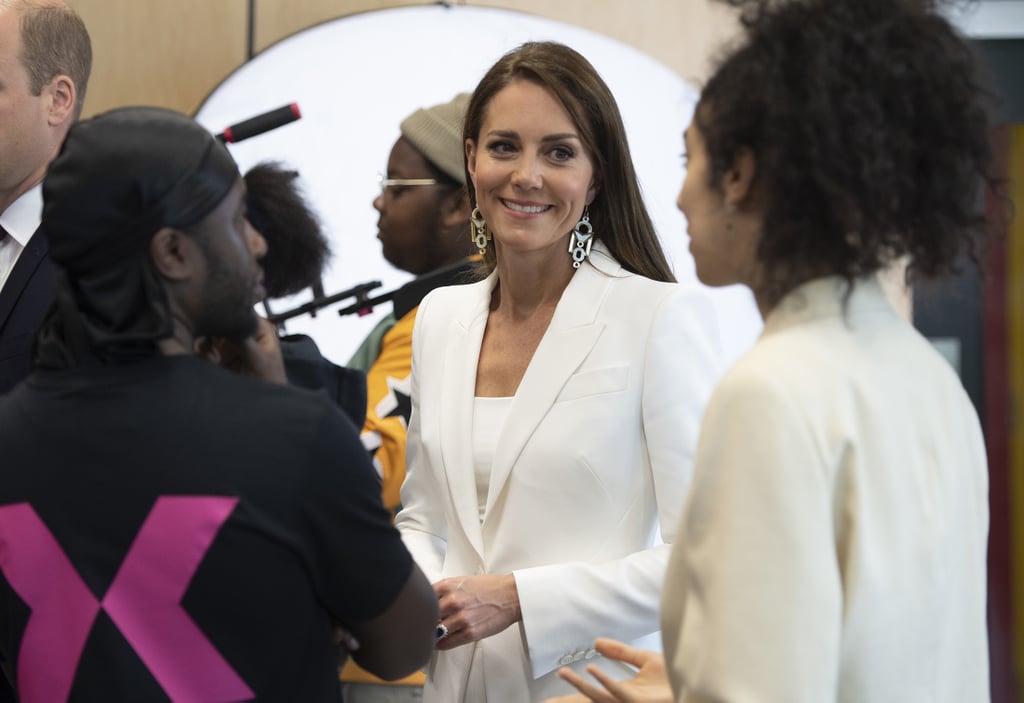 Kate Middleton served up another dose of professional attire when she attended the unveiling of the National Windrush Monument in London on Wednesday, June 2022. The Duchess of Cambridge re-wore a go-to ensemble for the occasion, arriving at Waterloo Station in a crisp white pantsuit composed of a single-breasted blazer and tailored high-waist trousers by Alexander McQueen. She doubled down on the neutral theme by layering a white tank top underneath and finishing with a Mulberry Amberley crossbody bag and pointed leather pumps in the same shade. The royal family member last wore the elegant suit during her trip to Jamaica in March, when she was photographed at the Shortwood Teacher’s College.

Her sculptural earrings, however, stood out as the true star of the ensemble, a pair of gilded pendants fashioned after the main stage auditorium ceiling of the Royal Opera House. The creation of London-based design studio Chalk, the jewels are reminiscent of a look from the late Princess Diana. Indeed, the accessory is similar in sophistication and style to the statement heart drop earrings the Princess of Wales sported while watching polo with Queen Elizabeth II in May 1987.

This sentimental reference isn’t surprising, given how often Middleton has paid tribute to her late mother-in-law by way of fashion. Most recently, the pink Alexander McQueen suit she donned to host a roundtable with government officials in London mirrored what Diana wore for a visit to Northampton, UK, in June 1989.

Liker her mother-in-law, Middleton is loyal to stately designer suits and the color white. Just two weeks ago, The Duchess of Cambridge styled another Alexander McQueen look to kick off Queen Elizabeth II’s birthday parade during Trooping the Colour, this time a double-breasted blazer-style dress.

Ahead, view the British royal’s latest outfit, and shop the exact pieces she wore.