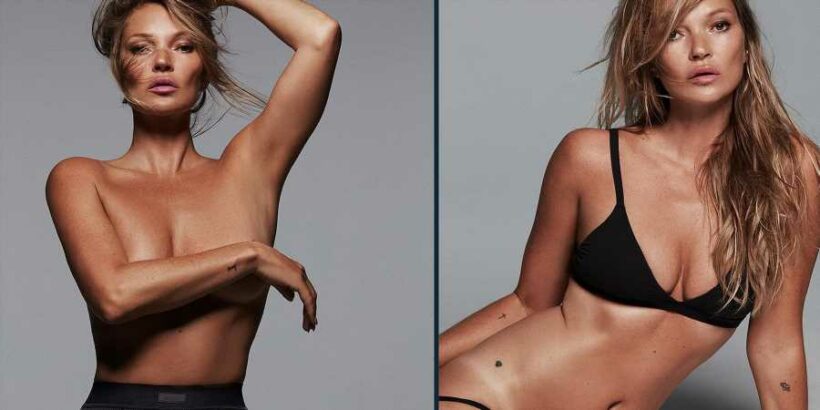 Just two weeks ago, Kim Kardashian's intimates and loungewear brand, Skims, made its Olympics debut. Now, Kardashian has made yet another huge brand announcement: Kate Moss will be the new face of Skims this summer.

The supermodel and fashion icon is starring in a Skims ad campaign that launches on July 15, styling some of the brand's most popular products from the Cotton and Everybody Fits collections. Kardashian announced the news on Twitter by posting a photo of Moss wearing a Skims bralette and underwear set, followed by a topless photo of the model in Skims leggings.

"I first met Kate in 2014 through Ricardo Tisci, and was instantly struck by her cheeky humor, authentic and classic beauty — we've been friends ever since!" she wrote.

In the new campaign photos and videos, Moss is wearing a selection of Skims styles, including the Cotton Rib Bralette and Brief, Cotton Rib Leggings, and Everybody Fits Scoop Neck Bra and Brief. You can shop Moss' exact styles at Nordstrom or Skims.com. Moss, who rose to fame when she starred in a Calvin Klein campaign as a teenager, said she's been a "fan of Skims since day one" in a press release.

"What Kim is doing with the brand is so fresh and modern, making underwear women actually want and that fits perfectly," she continued. "I wear it, my daughter wears it — even my mum wears it!"

Moss certainly isn't the only Skims fan, either — celebs like Irina Shayk, Ashley Graham, Paris Hilton, Sofia Richie, Billie Eilish, and various Kar-Jenners have all sported the brand. It's so popular that its launches often sell out quickly due to hundreds of thousands of people signing up for the waiting lists. (If you want to sign up for the next one, the newest Skims launch and restock will be available on Skims.com on July 15 at 9 a.m. PT.) If Moss' Skims styles are still in stock now, we have a feeling they won't be for long, so grab 'em while you can.