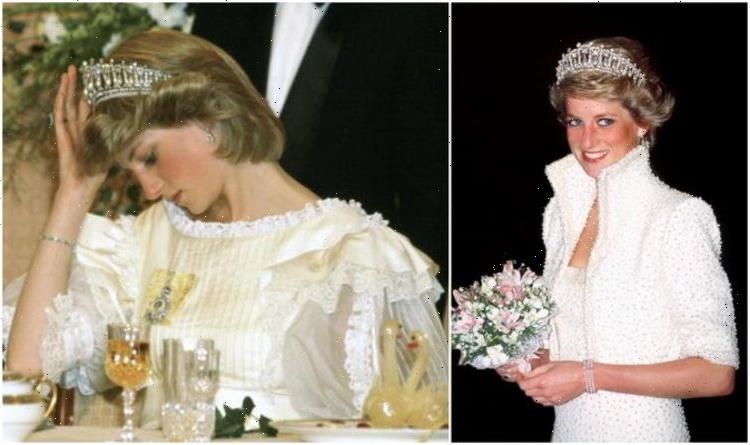 The Princess of Wales was reportedly loaned the Lover’s Knot Tiara in 1981 as a wedding gift by the Queen, however, Diana chose not to wear it on that occasion. She chose instead to wear the Spencer Tiara, a family heirloom to go with her David and Elizabeth Emanuel iconic wedding dress.

Although the Lover’s Knot quickly became one of Princess Diana’s favourite tiaras, the jewellery piece was reportedly so heavy that it hurt the Princess’s head.

According to royal insiders, the Princess used to complain that the Lover’s Knot Tiara was too heavy, too headache-inducing, and even too noisy due to the swinging pear-shaped pearls.

However, it made a few appearances on the Prince and Princess of Wales’ tour to Australia and New Zealand in 1983, and also on their visit to Canada later that year.

Despite these appearances, Diana would wear the Spencer Tiara for the majority of royal banquets.

It was through Princess Diana that Lover’s Knot became one of the most recognisable pieces of jewellery belonging to the British royal family.

Although the piece was so heavy she used to get headaches after wearing it, the Princess was seen wearing it on a number of occasions looking incredibly regal each time.

She famously paired it with a white, pearl-encrusted Catherine Walker ensemble while visiting Hong Kong in 1989.

Upon her divorce from Prince Charles however, the tiara was returned to Queen Elizabeth.

The Lover’s Knot Tiara has adorned countless members of the British royal family since its creation.

After Queen Mary’s death in 1953, the tiara was passed to Queen Elizabeth II, who wore it regularly in the early 1950s.

In 1981, Queen Elizabeth loaned the tiara to Diana, Princess of Wales, as a wedding gift.

But due to the fact Princess Diana famously found the tiara to be too heavy and headache-inducing, she often opted to wear the more lightweight Spencer Tiara.

The sparkling tiara is quickly becoming the Duchess of Cambridge’s go-to tiara in the 21st century.

For President Trump’s State Visit in 2019, she paired the tiara with the Queen Mother’s sapphire and diamond fringe earrings.

Kate has also previously worn it with an icy blue Alexander McQueen gown and also a plunging blush-coloured Marchesa dress.

As one of Diana’s most iconic pieces, the diadem most probably holds sentimental value for the Duchess of Cambridge.

But it also has an interesting royal history. This piece of jewellery was created for Queen Mary in 1914 by the House of Garrard from pearls and diamonds already owned by her family.

When Diana and Charles divorced, the crown was returned to Queen Elizabeth.

Diana was allowed to keep her jewellery as part of the settlement, but as the tiara was on loan from the Queen, it was given back, and reportedly put into a safe at Buckingham Palace.

According to People Magazine, following Diana’s death in 1997, the tiara wasn’t seen publicly until 2015, when Duchess Kate wore it at a reception at Buckingham Palace.