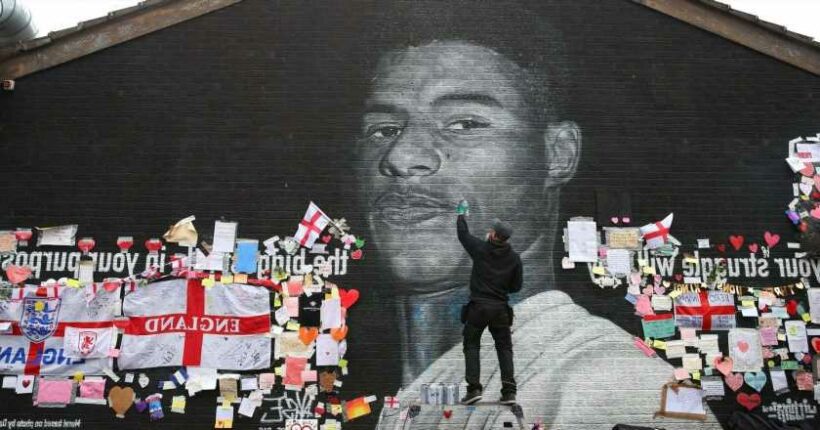 As we continue to navigate the racism targeted at England football players Marcus Rashford, Jadon Sancho and Bukayo Saka after the Euros final, here’s a note of love, acknowledgement and pride for my Black British community, writes acting executive editor Jazmin Kopotsha.

We’re all exhausted on what feels like a merry-go-round of conversations about the realities of racism in the UK. We’ve lived it, and we shouldn’t have to keep defending it.

But as I scroll through the outpouring of responses to the abhorrent racism directed at three young Black kings who stepped up to the plate to represent us all, I’m doing everything I can to not lose sight of the sheer pride and adoration that we have for them, us and our community. We’re tired, yes. But we’re not done.

I can’t shake the feeling that we were lured into a false sense of security, invited by nationwide comradery only to re-emerge into the distressing volatility of racism. United by England men’s football team’s heroic turn in the 2020 Euro tournament and torn apart by toxic attitudes in our society, we as a Black community are nudged back into that familiar corner where we’re sent to question and defend our existence against those who insist on stifling it.

To the racists who turned a shared sadness over a 3-2 loss on penalties into a racially targeted attack on Marcus Rashford, Jadon Sancho and Bukayo Saka, three Black players who stepped up to take those shots, our ‘Britishness’ is not dependent on our successes or our performance. It’s a baffling concept to have to put into words, isn’t it?

For those of us in the Black community who have grown up automatically immersed in England’s fierce – and often disorienting – adoration of football, there’s a hesitancy towards identifying as a ‘fan’.

We can’t hide from the decades-long legacy of racism in football, not to mention the historic discrimination interweaved into the fabric of British identity. And how upsetting for that mistrust of how safe and welcome our young Black athletes really are to be confirmed like this. How devastating for anyone else who couldn’t contain their joy whenever a flash of Black skin shot across our screens, to have to come to terms with this again, now.

We’ve been here before. This familiar sense of conflict in many of our hearts as we watch an outpouring of empathetic Instagram posts condemning racism is an echo from last year when the world woke up to the severity of institutional racism; when George Floyd was murdered by police officer Derek Chauvin.

It rings to a similar tune that was often muffled by the language used around Black Lives Matter, a movement that was born years before many engaged with it last year and was given fresh attention in predominantly white spaces when protests erupted in May 2020. Of all the interviews I read last year, it’s athlete Dina Asher Smith’s words in an interview with Wonderland magazine that still circle my head today. She turned down every request to publicly discuss racism and the BLM movement as she didn’t want to “argue about whether something I see and face every day exists or not.”

The news will move on and the racism spotlight will continue to pan across the landscape with varying degrees of intensity. I feel sick at having to brace for the ever-present possibility of being triggered into further distress and heartache with the likes of Priti Patel deciding to ‘condemn’ racism after describing taking the knee in support of football’s anti-racism movement as “gesture politics”, or reading Marcus Rashford’s apology for missing the penalty, his refusal to apologise for who he is and being “almost brought to tears” by the messages of support that were posted to a mural of his face that had been vandalised after Sunday’s match. But the thing that keeps me from tipping over the edge of despair is the pride I feel and see on the other side of this chaos.

I’m proud of the resilience our community has built out of the ongoing adversity that we should never encounter. I’m proud to see dark-skinned role models being rallied around by peers, fans and beyond because God knows we need to protect them all.

I’m overwhelmingly proud to belong to a community like ours that will not be broken by these incessant challenges to our strength, power and beauty. Long may we continue to back and believe in the Black kings and queens of the UK – the Rashfords and Asher-Smiths alongside the unsung members of our community who continue to propel the big names up and forward in support from the sidelines – because the UK as we know it would be nothing without all of us.