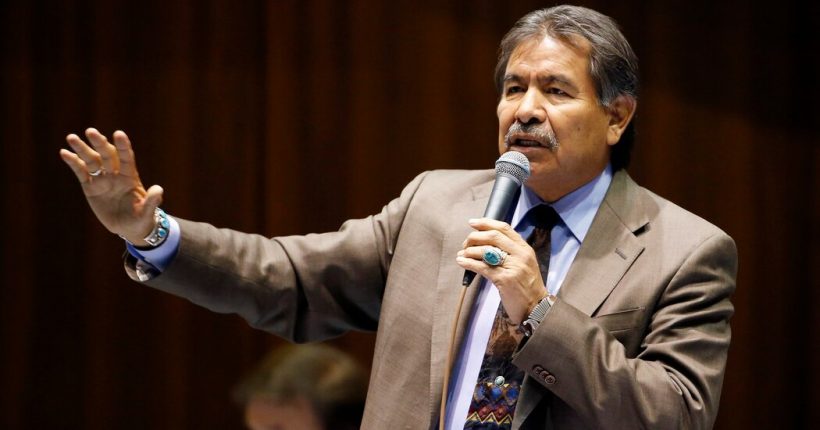 This obituary is part of a series about people who have died in the coronavirus pandemic. Read about others here.

Albert Hale was serving as president of the Navajo Nation when one of the most powerful political figures in the United States flared tempers by telling leaders in Indian Country that he had trouble understanding the concept of tribal sovereignty.

So in 1998, Mr. Hale, a trailblazing lawyer all too familiar with Washington’s methods of dealing with tribal nations, issued a retort to the official, Newt Gingrich, a Republican who was then speaker of the House of Representatives.

“When I come to Washington, you don’t send me to the Bureau of Indian Affairs,” said Mr. Hale, representing the largest Indian reservation in the United States, according to an article in The New York Times. “You have a state dinner for me.”

After a long career in politics, Mr. Hale died on Feb. 2 at a hospital in Mesa, Ariz. He was 70. The cause was Covid-19, his daughter April Hale said.

Mr. Hale’s death was a reminder of how the virus is devastating the Navajo Nation, which has been one of the hardest-hit places in the United States during the pandemic. At least 1,038 people have died from the virus in the nation, which spreads over parts of Arizona, New Mexico and Utah.

The Navajo Nation had only recently created a three-branch system of government similar to many other democracies, with a legislature, judiciary and executive branch, when Mr. Hale was elected its second president in 1994. His election was just one chapter in a long and sometimes tumultuous political trajectory.

Mr. Hale was born on March 13, 1950, in Ganado, Ariz. When he was an infant, Mr. Hale’s family lived at the Fort Wingate Army depot, a site used for storing and destroying ammunition amid the red rocks of western New Mexico. His father, Willie, worked at the depot.

When Albert was 2, his father was beaten so severely that he died in a jail cell in Gallup, N.M. His family was told that a police officer was responsible, Mr. Hale learned later. But no one was held accountable. His mother, Irene, who herded sheep the traditional way, was left to raise Mr. Hale and his siblings on her own.

His father’s killing motivated Mr. Hale to enter politics, his daughter April said: “He truly felt that the way to address social injustices was to make changes from the inside.”

Let Us Help You Better Understand the Coronavirus