On Monday the Senator’s ire was pointed solely at One Nation, which had introduced a bill intended to end coronavirus vaccine mandates.

The minor party’s leader, Pauline Hanson, said it was an attempt to stop discrimination.

So, Senator Lambie went to the history books, pointing to One Nation’s history of opposition to Muslims immigrating to Australia, children with autism being educated in mainstream schools and same-sex marriage.

“One Nation is not a fighter against discrimination,” she said. “One Nation seeks to profit from it. It’s just a fundraising exercise for them.”

“If you’re able to get vaccinated, and you choose not to, discrimination is the wrong word,” Senator Lambie said. “You have freedom to make the choice but if you make a choice, those choices have consequences.”

Being unvaccinated and angry about mandates was like driving twice the speed limit and then complaining about a speeding fine, Senator Lambie said, or refusing a safety check to work with children and then insisting on being employed at a school.

“Being held accountable for your own actions isn’t called discrimination, it’s called being, you wouldn’t believe it, a goddamn bloody adult,” Senator Lambie said. “That’s right, being an adult. It’s putting others before yourself. And that’s what this country is supposed to be about.”

She said she understood people being scared of vaccines but said no one wanted lockdowns, and vaccination allowed the vast majority of people to resume normal lives.

An hour later, Senator Lambie said she received a mass email from One Nation asking for donations in support of the party’s campaign.

Through it all, Senator Hanson’s visage watched over the debate on TVs mounted in the Senate, sometimes smiling, as she beamed in via videolink from Queensland.

Senator Hanson has dialled into Parliament remotely for recent sitting weeks but was not expected to be fighting for her bill from afar. The Senator had told a crowd in the Queensland town of Yeppoon earlier this month she would travel to Canberra.

“I intend to push the issue next week and that’s why I’m personally going down this time,” she said.

All along, Senator Hanson has said she is not anti-vaccine but favours rights and choice for people worried about the vaccine and concerned – contrary to medical evidence – the government is hiding the scale of side effects from the coronavirus jabs. 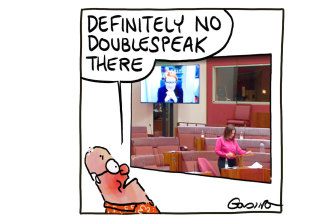 Even without her physical presence, the government appeared sufficiently concerned about Senator Hanson’s threat to withhold two crucial Senate votes from Coalition legislation to allow debate on her bill.

It meant bumping another bill from Nationals senator Sam McMahon that would have allowed the Northern Territory to legalise assisted dying.

“I am extremely disappointed this has occurred to all Territorians,” Senator McMahon said in a statement.

Despite the snub, Senator McMahon was one of five government senators to break ranks and side with One Nation, joining former resources minister Matt Canavan, South Australian Liberal Alex Antic, Queensland maverick Gerard Rennick and Liberal backbencher Concetta Fierravanti-Wells as the bill was voted down overwhelmingly. 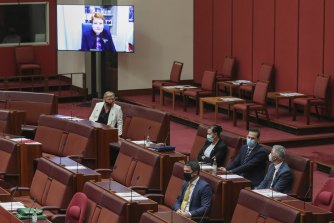 One Nation’s own votes were not counted in the final tally because of their physical absence from Parliament, but Senator Hanson insisted the way they would have voted be noted in the record.

“You need to rock up to vote,” Nationals frontbencher Bridget McKenzie called out from the Senate floor as the vote went down.

Fascinating answers to perplexing questions delivered to your inbox every week. Sign up to get our new Explainer newsletter here.