Cleaning my house cleans my mind! She’s made a fortune helping us declutter our homes. Now, as she shares her crafty Christmas tips in a new show, Stacey Solomon reveals how her obsession saved her sanity…

For her first Christmas as a struggling teenage single mum, Stacey Solomon was living at home, where she had to share a bedroom with her newborn baby and her brother and sister because her parents were so ‘hard up’. It didn’t make that Christmas in Dagenham any less special, though, because she and baby Zachary had a home, food on the table and were surrounded by the love of their family.

The TV presenter, X Factor finalist and I’m A Celebrity winner could never have imagined that one day she would not only live in a £1.2 million mansion with a loving husband and surrounded by her own blended family, but that she’d also be hosting her own show with them about crafting the perfect Christmas in her home.

‘I have the most incredible family. For Zachary’s first Christmas, my sister, my brother and Zachary were sharing a bedroom but it was magical because I had my family. 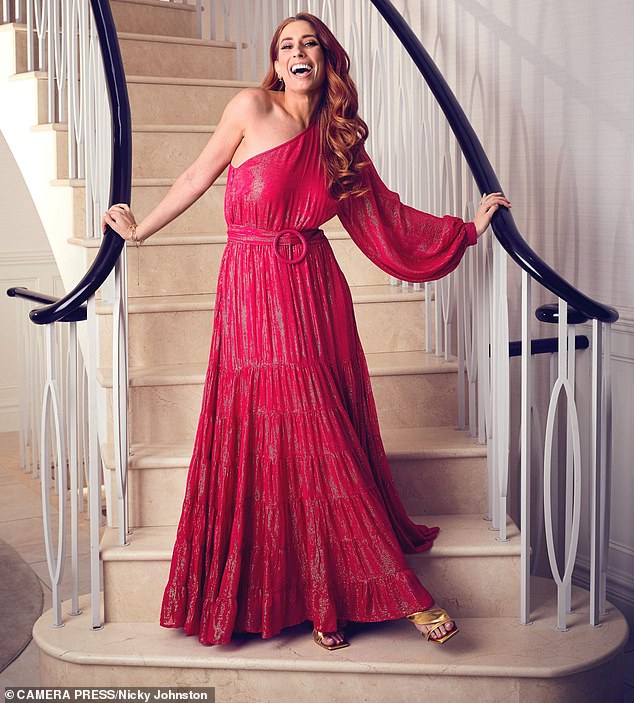 Stacey Solomon (pictured) spent her first Christmas as a single teenage mum at home. The TV presenter would never have imagined how her life has turned out

‘I was so lucky because although my mum and dad divorced, they remained great friends and would spend Christmas Day together with us.’

Her parents have proved excellent role models for Stacey, 33, and her husband, actor and presenter Joe Swash, 40. The couple live with their one-year-old daughter Rose, three-year-old son Rex and Stacey’s two boys from previous relationships, Zachary, now 14, and Leighton, ten, in Pickle Cottage, a part-Tudor mansion named after their children, who she refers to as ‘pickles’.

Joe also has a son, Harry, 15, from a previous relationship, and they juggle the demands of parenting surrounded by 2.5 acres of land in the Essex countryside. In their fun and festive one-off special, the Solomon family, including Stacey’s dad David and sister Jemma, get creative, sharing clever ways to cut costs, upcycle and spread some homemade cheer at Christmas.

‘I pinch myself every day,’ says Stacey. ‘I did not grow up thinking I’d have a job like this and that one day I’d live in a cottage like this.

‘You never know what’s going to happen, so we’re enjoying it while it’s good, and the fact I’ve been asked to do a “craft your own Christmas” with my family at home is a dream come true.’ 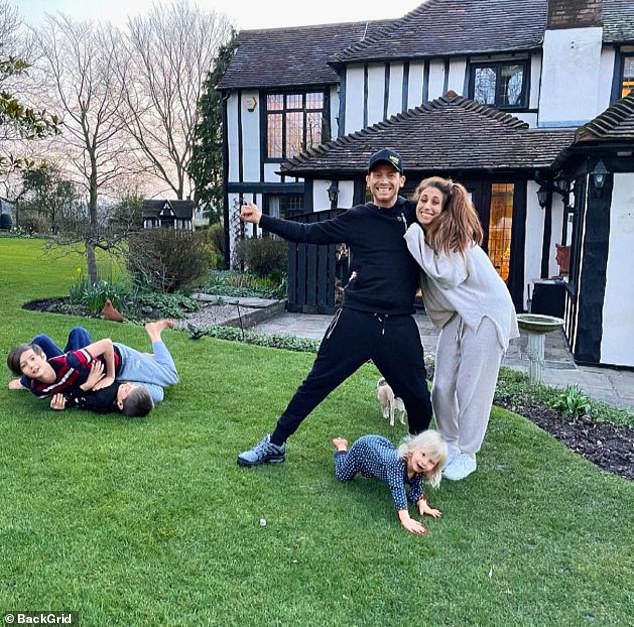 Stacey with and her husband, actor and presenter Joe Swash, 40 and her boys outside Pickle Cottage

This wasn’t always her dream, though. Stacey shot to fame as the struggling teenage mum who reached The X Factor final in 2009.

She’d only learned at 24 weeks that she was having a baby, fathered by childhood sweetheart Dean Cox, after her stepmum worked it out when she got nauseous at the smell of onions that weren’t there.

It was the physical and mental trauma of having Zach at such a young age that gave her the steely determination to fight back against the odds. So at The X Factor auditions, when organisers told her and Zach to go home as they’d run out of time, Stacey protested, and the producer changed her mind as she’d also had a baby at a young age.

She eventually finished third and released an album, Shy – yet it seemed that Stacey was destined to be just another flash in the pan. 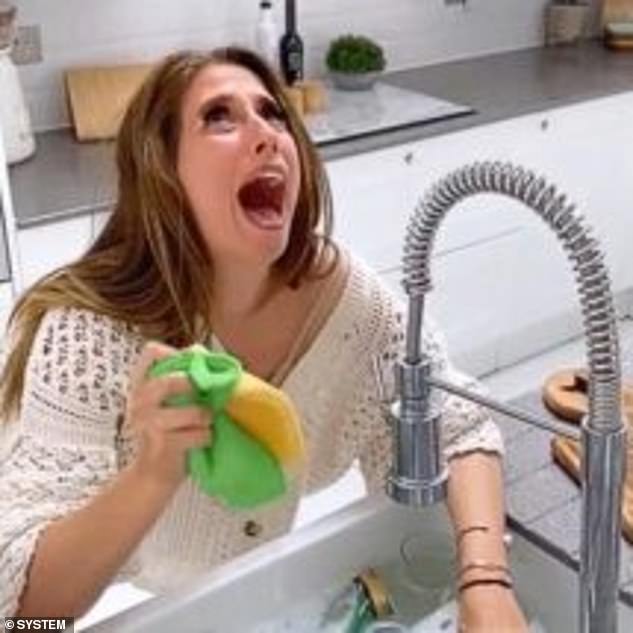 Stacey with her hands down a dirty sink. She is launching a new programme where she helps people declutter their homes

But she’s gone on to build quite the career, earning herself a £5 million fortune as a social media sensation and TV star from her other passion – tidying and organising. Her online campaign Tap To Tidy, in which she posts before-and-after pictures of her own transformed rooms, has earned her more than five million Instagram followers, and the accompanying book, Tap To Tidy: Organising, Crafting & Creating Happiness In A Messy World, topped Amazon’s non-fiction chart.

She’s a regular panellist on Loose Women, and the pilot of her BBC show Sort Your Life Out was so popular that it was commissioned for a full series.

In the show, Stacey and her team visit families overwhelmed by clutter, and help them decide what to keep, sell, recycle or bin. It’s an emotional watch, and one that resonates with Stacey herself as her obsession for organising stems from a lifelong battle with anxiety and panic attacks that started at the age of six.

When she can’t sleep she’ll clean the house at 1am. These days her panic attacks are less frequent but, despite trying yoga and various therapies, it’s her passion for structure that’s the greatest help.

‘When my anxiety was really bad, it was mostly about the fear of dying. I think it’s about a lack of control,’ says Stacey. ‘I used to think about it all the time and I couldn’t switch my brain off from catastrophising every situation.

I’d make up things in my mind and I’d panic over something I’d imagined. Then I realised the only time my brain shut off was when I was focused on a task, like cleaning the sink.

That allows me to put a barrier between things that are scaring me, because I have to really concentrate on what I’m doing in that moment.

‘It feels good. Then I feel I can do anything next.’

While having her first baby aged 18 led to terrible post-natal depression, Stacey says Zach was the making of her. She went back to college and had to leave him in a crèche which meant she could never be late.

She could never miss classes in case she failed her exams, and never miss the Post Office run to collect her giro cheque or miss cashing in her tokens to buy baby milk.

‘It made me push myself hard. I’ve always been organised – as a little girl I’d place the food on my dinner plate into sections and still do – but after having Zach I began to become more organised because there was no room for error in anything.’

Winning I’m A Celebrity in 2010 was what really turned things around for Stacey. Her modesty and self-deprecation made her extremely popular, but also cynics who’d questioned her intelligence because of her broad Essex accent and constant smile started to realise she was sharper than they thought.

‘When you’re happy or come from a background that’s less posh, and you’ve got what’s classed as a common accent, then quite often people will only take you at a certain level because they think that’s your intelligence capacity,’ says Stacey.

‘There’s definitely a type of person who would underestimate me. As I’ve got older I feel that’s a nice thing, because it means I can say anything and it’s going to sound genius!’

It was thanks to I’m A Celebrity that Stacey met her future husband – when she was crowned Queen of the Jungle, Joe, the 2008 King of the Jungle, gave her a congratulatory hug. Although she was with Leighton’s father at the time, they split in 2014 and in 2015 she began dating Joe.

Seven years on, Stacey is on a roll. She gave birth to Rose on her 32nd birthday in October last year and married Joe in July this year.

Her new book, Tap To Tidy At Pickle Cottage: Crafting & Creating A Home With Love, inspired by her house renovation, is flying off the shelves.

Despite her organising ways – even her hairbands are arranged in pots by colour – Pickle Cottage is warm and welcoming. Today there’s a happy mess of Christmas decorations that have been trampled by Rex as he bombs around the living room while Joe ‘hoovers’ up leaves in the garden.

Peanut the sausage dog and Teddy the cocker spaniel are snuggled up with Stacey on the sofa.

On the new show, she teams up again with professional organiser and Sort Your Life Out co-star Dilly Carter to transform a neighbouring barn into a Christmas grotto for a festive party with her local community, and shows us how to rustle up DIY Christmas crackers, garlands and a cheat’s Christmas cake.

The time-saving techniques are vital for Stacey. ‘Every Christmas I look forward to the same thing: stopping from Christmas Eve to Boxing Day. No deadlines, no pressure.’

It’s stressful managing their large family and she admits there are pressure points. ‘It’s healthy in any relationship to have points where you’re frustrated or at loggerheads.

‘Joe and I can be like ships passing in the night – when I work he looks after the kids, and when he works I have the kids. We’re very different people but when we strip everything back what it all comes down to is our family and having the same core moral values.

‘Joe doesn’t live the way I live and doesn’t understand my mentality. So he has areas in the house that are upside down because that’s what makes him comfortable, unlike me who wants to fold my knickers into little squares,’ she laughs.

But on Christmas Day, he takes over. ‘He cooks, makes the toys and even clears away the wrapping paper.

‘The first year I didn’t know what to do with myself, but now I can totally let go on this one day of the year.’