‘It isn’t bold or brave’: Superman actor Dean Cain slams decision to make the superhero bisexual as ‘bandwagoning’ – and calls for DC Comics to ‘fight real injustice’ like human trafficking and gay rights in Iran

Former Superman actor Dean Cain has accused DC Comics of ‘bandwagoning’ after the company revealed that the legendary superhero will come out as bisexual and begin a romance with a close male friend in an upcoming issue of the comic series.

Cain, 55, who played the superhero for four years in the hit 90s TV series Lois & Clark: The New Adventures of Superman, slammed DC for hailing the move as a ‘bold new direction’ during an appearance on Tuesday’s Fox & Friends – while calling for the company to focus its efforts on ‘fighting real evil in the world’.

The actor pointed out that Superman is the latest in a long line of superhero characters to be given an LGBTQ+ plotline – which comes just two months after DC Comics announced that Batman sidekick Robin was also going to start dating a man.

‘They said it’s a bold new direction… I say they’re bandwagoning,’ Cain said in his on-air interview. ‘Robin, of Batman and Robin, just came out as bi or gay recently and honestly who’s really shocked about that one? I had some thoughts about that a long time ago. 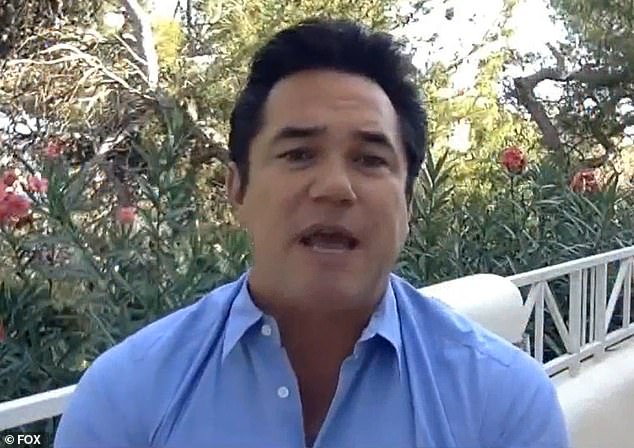 Outcry: Former Superman actor Dean Cain has accused DC Comics of ‘bandwagoning’ after the company announced that the legendary superhero is bisexual 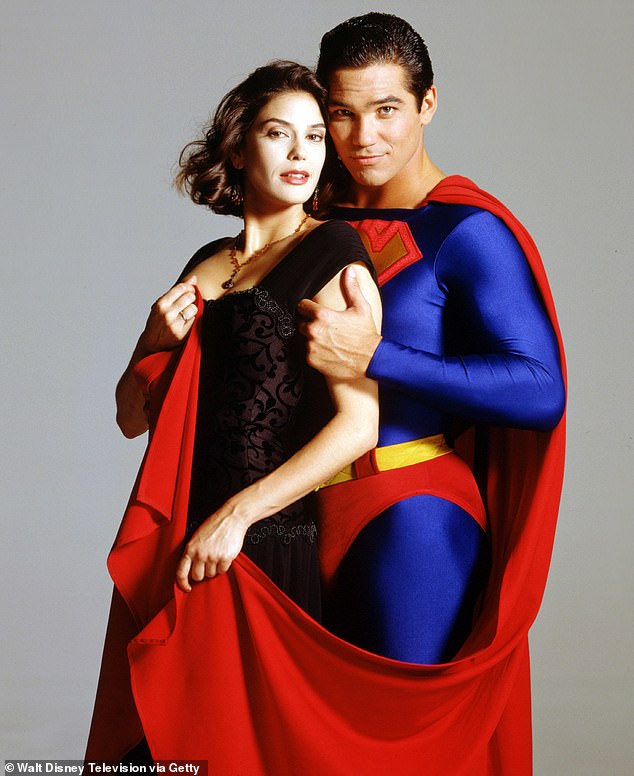 Throwback: The 55-year-old actor played the part of Superman for four years in the hit 90s TV series Lois & Clark: The New Adventures of Superman alongside Teri Hatcher as Lois Lane

Plot twist: DC Comics announced on Monday that the new Superman, Jonathan Kent, the son of Clark Kent and Lois Lane, will begin dating a refugee ‘hacktivist’ reporter in a new issue

‘The new Captain America is gay, my daughter in [the CW series] Supergirl, where I payed the father, she was gay.

‘So I don’t think it’s bold or brave or some crazy new direction. If they had done this 20 years ago, perhaps that would have been bold or brave.’

His comments come just one day after DC Comics revealed that its new Superman character Jonathan Kent, the 17-year-old son of Clark Kent and Lois Lane, is set to come out as bisexual and begin dating a refugee ‘hacktivist’ reporter in a November issue of Superman: Son of Kal-El.

The series, which debuted in July, has seen the legendary superhero take on a much more woke stance than former iterations of the character.

In place of sinister supervillains, Jon takes on several hot-button issues, including high school shootings, climate change, and the deportation of refugees – all of which are a world away from the old-school evil that the Man of Steel once fought.

Cain also took aim at these issues, insisting that DC Comics could have done much more to highlight the impact of ‘real evil in the world’ like human trafficking, women’s rights in Afghanistan, or corruption.

‘Brave would be having him fighting for the rights of gay people in Iran where they’ll throw you off a building for the offence of being gay,’ he said.

‘They’re talking about him fighting real-world problems like climate change and the deportation of refugees and he’ll be dating a “hacktivist” whatever a “hacktivist” is, I don’t know.

‘Why don’t they have him fight the injustices that created the refugees whose deportation he’s protesting? That would be brave, I’d read that. Or fighting for the rights of women to attend school and have the ability to work and live, and boys not to be raped by men under the new warm and fuzzy Taliban. That would be brave.

‘There’s real evil in this world today, real corruption and government overreach, plenty of things to fight against. Human trafficking, real actual slavery going on… it would be brave to tackle those issues, shine a light on those issues. I’d like to see the character doing that. I’d read that comic.’

Cain – who was appearing on the show from his house in Spain – shared his thoughts on the new Superman storyline just one day after DC Comics made the announcement about the superhero coming out as bisexual, just two months after the company announced that Batman sidekick Robin was dating a man. 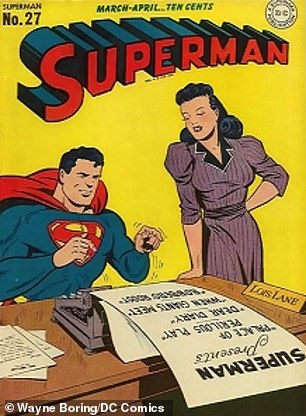 Moving on: The new Superman is the son of the original Man of Steel (pictured) and his storylines have already tackled many more woke issues than his father used to face

The company revealed that Superman’s new romance will take center stage in an upcoming issue of the comic, due to be released on November 9.

However, the same-sex relationship was inspired by the iconic romance between Clark and Lois, with DC revealing that the new Superman’s partner, refugee ‘hacktivist’ Jay Nakamura, is also a reporter – just like the young superhero’s parents.

‘Just like his father before him, Jon Kent has fallen for a reporter,’ the company said in a press release.

However, series writer Tom Taylor said that this is where the similarities end – explaining that Jay will not play the same ‘damsel role’ to Jon as Lois did to Clark, but rather feature as something of a sidekick for the superhero.

‘Jay has his own fight,’ Taylor told IGN, revealing that Jay will also soon learn that he has his own set of superpowers. ‘He’s obviously an effective journalist, and Lois Lane is his hero.

‘But Jay is also a refugee from [the fictional island nation of] Gamorra, so his experience also reflects Clark’s. While this has fortunately changed over the years, historically, Lois has often fulfilled a damsel role. Jay Nakamura will never be that. He and Jon will tackle many things side-by-side.’ 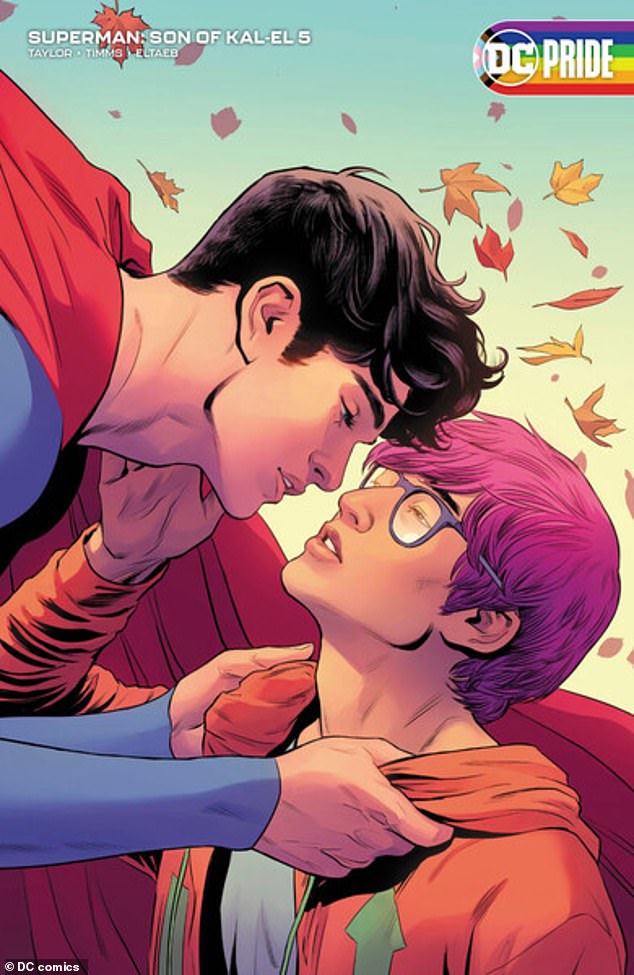 The new comic series Superman: Son of Kal-El has seen the superhero tackling several woke issues, including climate change and the deportation of refugees 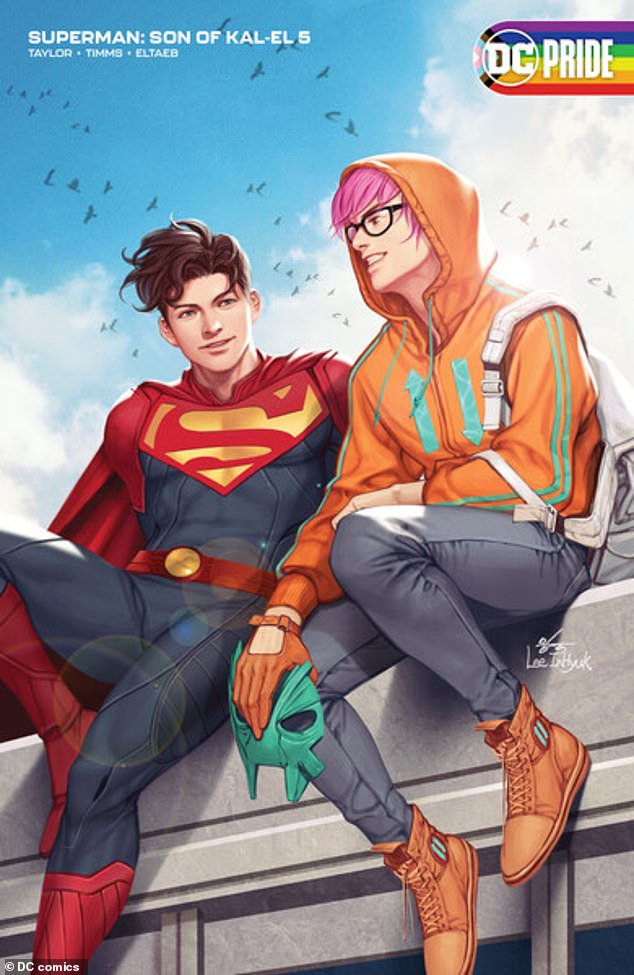 Questions: Cain insisted that if DC Comics wants to really do something ‘bold and brave’, it should show Superman fighting ‘real evil in the world’ like human trafficking

Although all of the details about Jon and Jay’s relationship have not yet been revealed, DC did offer a sneak peek at how their romance began – explaining that the pair will begin dating after Superman suffers from ‘mental and physical burn out’.

‘After initially striking up a friendship with reporter Jay Nakamura, he and Jon become romantically involved,’ the company said.

‘Following a scene where Superman mentally and physically burns out from trying to save everyone that he can, Jay is there to care for the Man of Steel.’

It continues: ‘Faster than fate. As powerful as hope. Able to lift us all. For all his great power, Jon Kent can’t save everyone, but that won’t stop him from trying. How much can Earth’s new Superman do before this Man of Steel buckles? And when he does, who swoops in to save Superman?’

Images from the upcoming comic, which is the fifth issue in the new series, show Jon and Jay kissing and embracing, with Superman clad in his iconic blue-and-red uniform, while his pink-haired partner is seen wearing an orange hoodie, white T-shirt and purple glasses.

Jay will also be introduced to Clark and Lois in the new issue of the comic – with a sneak peek revealing that the reporter is left dumbstruck with nerves upon meeting his partner’s mother for the first time.

Speaking about the decision to give Superman an LGBTQ+ storyline, series writer Tom Taylor told the New York Times that he wanted the new version of the character to be relevant for a modern audience – insisting that it would have felt like a ‘missed opportunity’ to once again portray the superhero as a ‘straight white savior’.

‘The idea of replacing Clark Kent with another straight white savior felt like a missed opportunity,’ Taylor said. 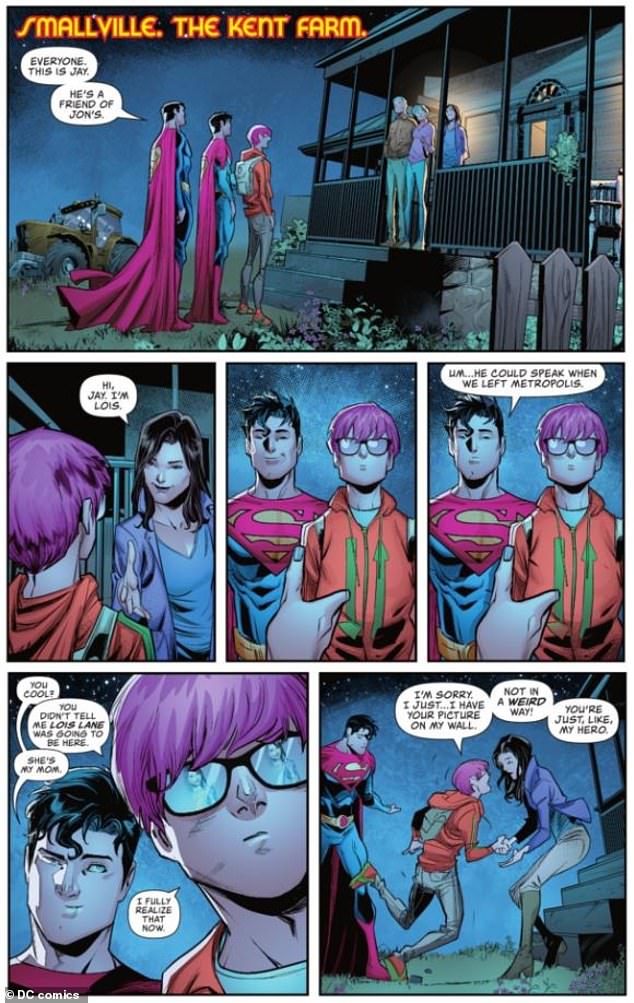 Meet the parents: Jay will also get the chance to meet Clark and Lois in the issue, with images showing the reporter struggling to overcome his nerves while meeting Superman’s parents 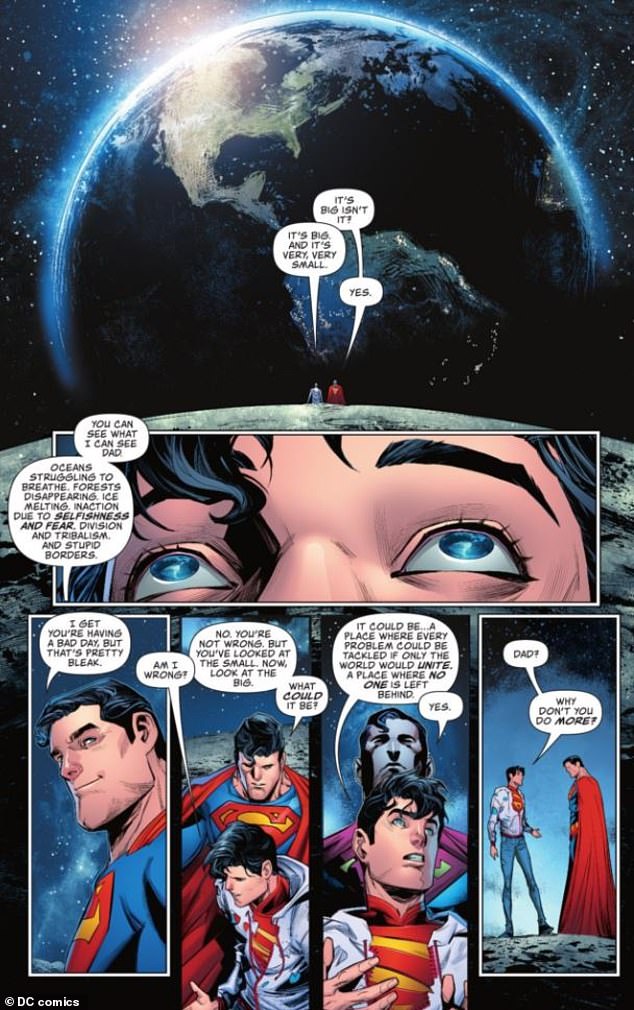 Hot-button issues: The new Superman has taken on much more liberal issues than his father once did; Jonathan has been seen struggling with climate change and high school shootings

‘[A] new Superman had to have new fights — real world problems — that he could stand up to as one of the most powerful people in the world.’

He added to IGN: ‘I’ve always said everyone needs heroes and everyone deserves to see themselves in their heroes. Today, Superman, the strongest superhero on the planet, is coming out.’

This same thinking applies to the enemies that the modern-day Superman tackles, which have shifted from the traditional supervillain and now include societal issues like global warming, the border crisis, and gun control.

‘The question for Jon (and for our creative team) is, what should a new Superman fight for today?’ Taylor continued. ‘Can a 17-year-old Superman battle giant robots while ignoring the climate crisis? Of course not. Can someone with super sight and super hearing ignore injustices beyond his borders? Can he ignore the plight of asylum seekers?’

The news about Superman’s LGBTQ+ relationship comes just two months after DC Comics announced that another of its legendary characters – Batman sidekick Robin – was also set to come out as bisexual and begin a relationship with a man.

In August, the comic book company revealed that the Caped Crusader’s longtime sidekick Robin, a.k.a Tim Drake, would accept a date with a male character called Bernard Dowd in a new issue of the series Batman: Urban Legends.

Robin was described as having a ‘lightbulb moment’ when fighting alongside Bernard during a brawl, eventually rescuing Bernard in the process.

Fans of the comic welcomed the revelation saying they suspected Drake may be bisexual or gay for years.

In March, Marvel revealed their first openly-gay Captain America character, Aaron Fischer, which is debuted during Pride Month this past year.

Fischer is a youth advocate that was included in the ‘United States of Captain America’ comic book miniseries which was released on June 2.

‘He stands for the oppressed, and the forgotten,’ Trujillo added. ‘I hope his debut story resonates with readers, and helps inspire the next generation of heroes.’