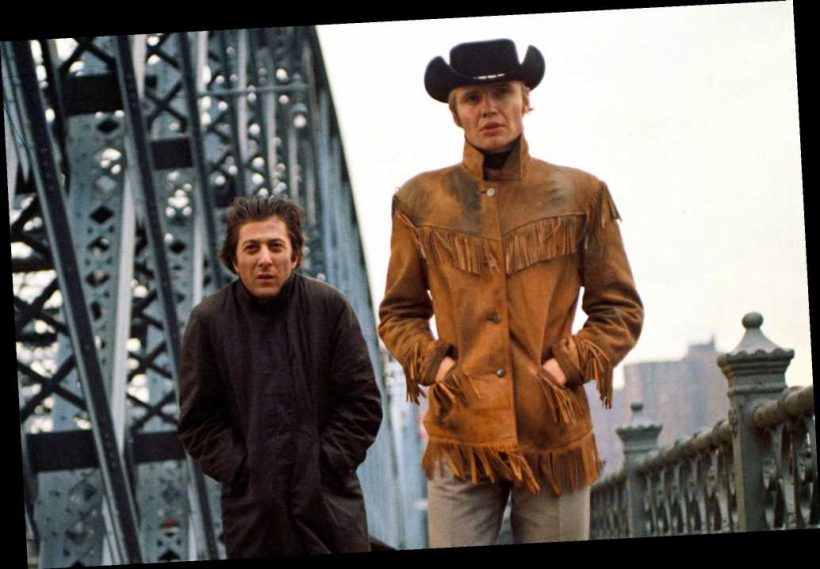 ‘Learn it. Know it. Live it.’: ‘Fast Times at Ridgemont High’ house for sale

Michael Childers, who assisted his director boyfriend John Schlesinger on set, remembers the 1968 filming as “a colorful time in New York. There were junkies on doorsteps, and I saw one dead body in a garbage can. That was part of our milieu. It was primal.”

Even the nonhuman refuse shocked. Due to a strike by sanitation workers, as Childers and Schlesinger arrived in the city to prep for filming, there were 70,000 tons of garbage piled on the streets.

As recounted in the new book “Shooting Midnight Cowboy: Art, Sex, Loneliness, Liberation, and the Making of a Dark Classic” (Farrar, Straus and Giroux) by Glenn Frankel, garbage fires were on the rise and people worried that typhoid, dysentery and hepatitis would spread.

Filmed in some of Manhattan’s most crime-riddled sections — like West 42nd Street and the Lower East Side — “Midnight Cowboy” captured the going-broke city at its most coldhearted. In a scene near Tiffany’s Fifth Avenue flagship, crowds step around a possibly dead body sprawled on the sidewalk.

The visual was inspired by an incident that Schlesinger witnessed while scouting. “New York was wild and strange and wide open,” said Frankel. “The movie captures it all through stolen shots: taken with long lenses from the backs of vans while actors walked among pedestrians who were unaware that they were being filmed.”

As Childers remembers it, “We’d be filming on 42nd Street at 2 in the morning. Real freaks mixed in with actors. The police told us not to wander more than 20 feet away.”
Jon Voight stars as Joe Buck, a would-be gigolo who comes to Manhattan from Texas and falls in with a lame, shoplifting “Ratso” Rizzo, portrayed by Dustin Hoffman, all on New York City streets that reeked of authentic decrepitude.

Art met reality in the scene where Ratso nearly gets nicked by a taxi. He responds in true New York fashion: Slapping the vehicle’s yellow hood and angrily shouting, “I’m walkin’ here! I’m walkin’ here! . . . Up yours, you son of a bitch!”

Hoffman landed his role by meeting Schlesinger late at night in a seedy Manhattan Automat — and arriving in character, limp and all. “Hoffman wore a dirty raincoat and beaten-up shoes. His hair was greasy,” said Frankel. During filming, when the director and the actor — who had received an Oscar nomination that year for “The Graduate” — went to Sardi’s, Childers said, “Dustin walked in as Ratso, and the maître d’ didn’t want to give them a table.”

Even the squat where Joe and Ratso lived was the real thing. “The set designer extracted a two-room apartment from an abandoned building,” Frankel said. “He rebuilt it in a studio. The director said it smelled like urine and had everything except the rats.”

Childers claimed that drug use in the party scene — where Warhol superstars such as International Velvet and Ultraviolet play party guests — was also authentic: “A couple painters dropped acid, the Warhol people were speed freaks and enough pot was being smoked that the [union] guys freaked out.”

Shocking as the dirty real­ism might have been, it was a hit. “Authenticity contributed to its success,” said Frankel of the $3.2 million film that earned $45 million. “Those shots of Voight roaming through Times Square in his cowboy hat, running out of money and running out of hope — they sum up what a lonely and dangerous place New York can be.”