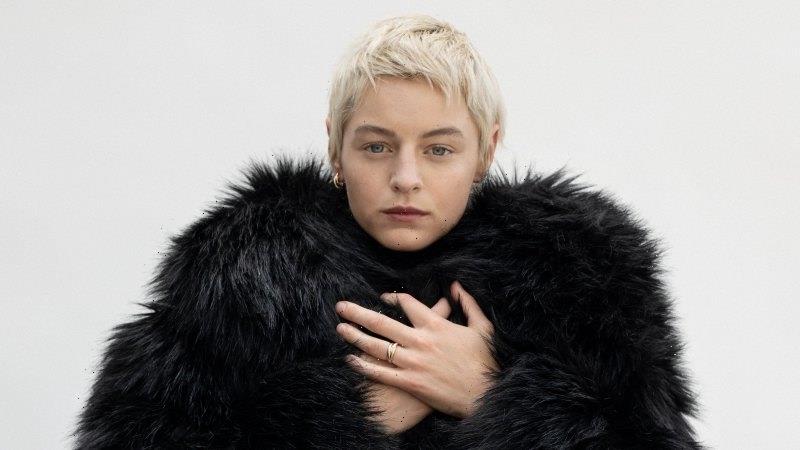 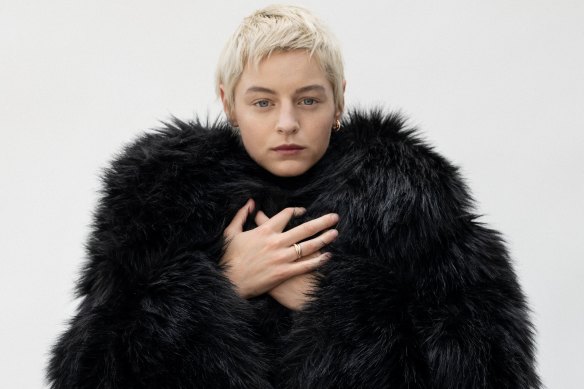 I think I just come across as a sort of lost schoolboy.” Emma Corrin is telling me about being refused entry to an airline lounge while travelling back from the US recently. “They asked where my chaperone was.”

The lounge gatekeepers eventually realised that their customer was, in fact, the 26-year-old star whose breakout part as Diana in series four of The Crown was rewarded with a Golden Globe and led to roles in two of this year’s most hyped films: My Policeman, with Harry Styles, and Lady Chatterley’s Lover. “I’m trying to have some more film-starish experiences but it’s not really working,” Corrin says.

Corrin, who has publicly identified as nonbinary since 2021 and uses they/them pronouns, fiddles with the neckline of a navy-blue jumper; even over Zoom I’m struck by an easy beauty. Despite attempts to convince me otherwise (“I walked into a bench when Cate Blanchett said hello to me at a film festival – it was so loud everyone stared”), Corrin still exudes an uncontrived kind of cool.

In Lady Chatterley’s Lover, Corrin plays the title character, aka Connie, who has a passionate affair with Oliver (Jack O’Connell), the gamekeeper on her estate. It’s a brave choice to take on at this stage of a career, given the amount of nudity required for the role.

I’d much rather be boldly myself and comfortable than not.

“The reason I wanted to do Chatterley is the positive way it views sex and female pleasure,” Corrin says. “Despite that, I feel so vulnerable about it being out there. Hopefully it will have an impact precisely because of what is making me feel vulnerable.”

One scene is quite unforgettable, and I have to ask Corrin if it was as fun as it looked to dance naked in a field in the rain, whooping and laughing wildly with an equally butt-naked male co-star. “I felt terrified when I read [the scene]. Therefore I felt that’s probably reason enough to do it.”

The scene was one of the actors’ first together after two weeks of rehearsal with an intimacy co-ordinator, blocking out movements and making sure they were comfortable with all the sex scenes. In the end, there was no choreography in that scene as the team wanted a sense of spontaneity. 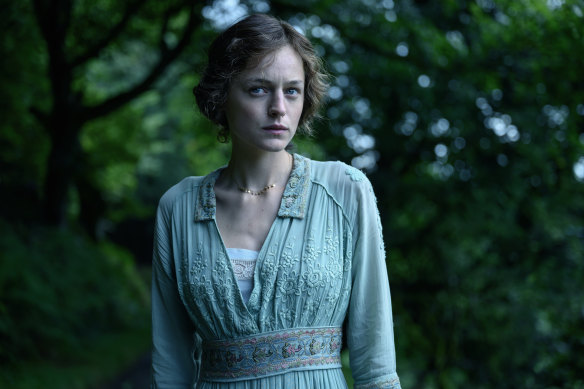 “It is very rare on screen that you will be naked, completely naked, for
a sustained period of time, especially interacting with another person physically. I remember someone shouting ‘Action!’ and it’s almost like you have to turn off all the feeling in your body and just go for it.”

Recently, the actor Sean Bean was criticised for claiming that intimacy co-ordinators spoil the spontaneity of sex scenes. What does Corrin think?

“It’s the equivalent of having a stunt co-ordinator.” Crucial, “because of safety, because of those two people’s feelings of being comfortable … even technically for the crew, working out what shape the scene’s going to take. Once those boundaries are established, then there can be spontaneity.”

Prior to #MeToo, many actors, mainly women, would have felt taken advantage of or unsafe because so many of those in power are men.

“I’ve done it myself,” Corrin says. “I’ve been on sets where I’ve been asked to do something and in the moment I’ve done it. Then people have come up to me and been like, ‘Emma, were you comfortable with that?’ And I was like, ‘I just felt I should because we were in the middle of a take and they asked me to take this piece of clothing off and I did it.’ At the start of your career you feel you have to go along with things.”

I ask Corrin if anyone advised them not to talk so openly about their gender journey (they came out on Instagram and speak openly about their fluidity on the social media platform; last year they also posted pictures of themself wearing a makeshift chest binder).

“There are always those voices,” Corrin tells me. “Luckily, none of them I work with closely, but you are aware of them. I notice there’s always that voice in your head that’s like, ‘If I come out of this, if I define myself as this thing, will it mean people won’t trust me with certain parts?’ But you can dig yourself into such a hole of hypotheticals … I’d much rather be boldly myself and comfortable than not.”

As a child growing up in the Kent countryside, Corrin created imaginary worlds involving fairies and elves. At their Catholic girls’ school, they channelled this love of storytelling into acting, going on to read education, English and drama at Cambridge.

The first insight I get into their breezy good nature is when I ask about school. “I loved school, actually. It’s my favourite kind of environment; I’m a huge people pleaser. So there were a lot of people to please, a lot of rules, which I love following, and a lot of structure and routine, which I’m obsessed with. Plus, I got to see friends every day. I had the best time.” 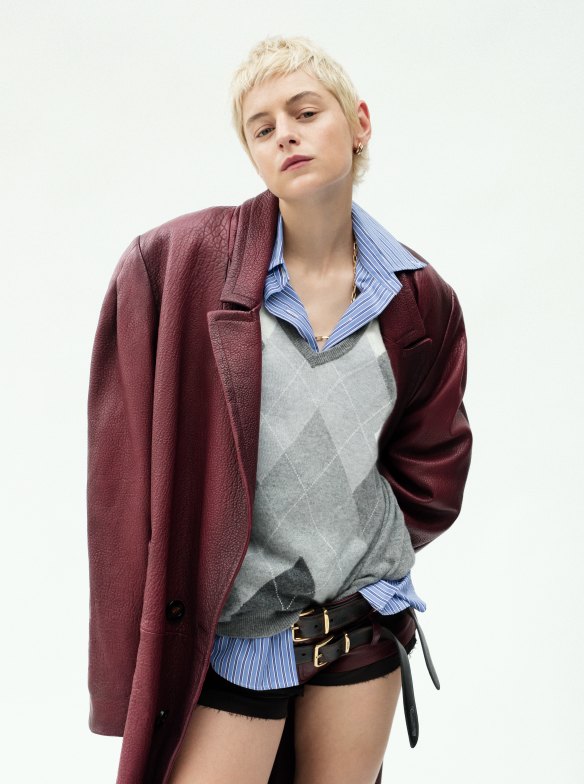 There’s a playfulness to Corrin, along with a wide-eyed emotional depth, that made them perfect for the career-defining role in The Crown. Diana’s femininity and vulnerability were played with such well-observed verisimilitude that at times the show feels more like a documentary than
a work of fiction. It must have been daunting being offered a role that came with such a heavy weight of expectation from the public, I venture. 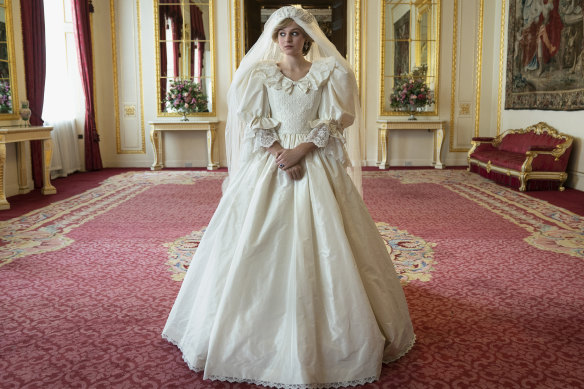 Corrin as Diana, Princess of Wales, in The Crown.Credit:Netflix

“When I first found out I’d got it, I felt so many things at once,” says Corrin. “An excitement, a fear for the role and fear for how my life would change. But it was so exhilarating.”

Elizabeth Debicki is taking on the part of an older Diana in the next series of The Crown. “She’s lovely, but we haven’t actually talked that much about Diana,” Corrin says. “She’s aware that I’m here if she ever wanted to ask a question, though.”

Another queer actor, Kristen Stewart, played Diana in the film Spencer and we talk about how “in many ways Diana was so queer”; she was the definite “other” within the family and always embraced “outsiders”.

Even as someone who sort of knew [Harry Styles] before, it’s always strange to be reminded that he is who he is. In himself he’s very low-key.

Although “tomboyish” as a kid, it was only in the last few years that Corrin began to question why they had always felt at odds with their gender. A first queer relationship felt “like being born a bit, opening my eyes to this whole other way of life that felt so right, so beautiful. And in quite a terrifying way, it called into question everything I’d assumed about myself, and the way I loved people before, and how I felt.”

Perhaps this self-awareness is what makes Corrin such a powerful presence as an actor. I’d go as far as to say that their supporting role in My Policeman, the new film about a forbidden love affair between two men in 1950s England, is what elevates the film into something quite tender. 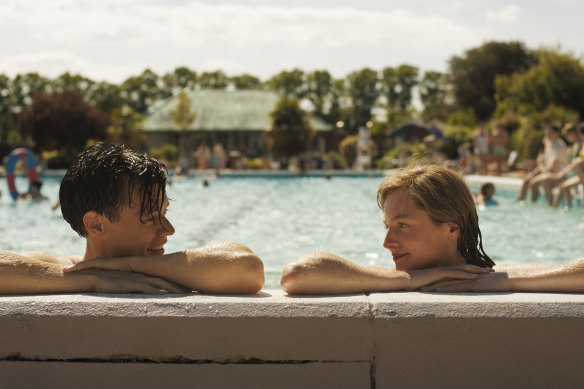 Harry Styles, left, and Corrin in a scene from My Policeman.Credit:Amazon/AP

Styles portrays a gay policeman who falls in love with Patrick (David Dawson) but marries Corrin’s character, Marion, as a decoy. I ask if the fame and fandom that Styles seems to wear as effortlessly as he does a Gucci jumpsuit was a distraction on set.

“I’d been friends with him for a while before we started shooting. But even as someone who sort of knew him before, it’s always strange to be reminded that he is who he is. In himself he’s very low-key. Then I went to one of his concerts at the end of last year and it was the first time I’d ever seen him perform. And it was like, ‘Whoa, okay, wait, I forgot you are this person, too.’ ”

When not filming, home is north London, where Corrin lives with four university friends, none of whom is in an even remotely similar profession.

“They just don’t give a shit about what I do in any way, and my successes are not considered any more special than anyone else’s,” Corrin tells me before admitting that they are the “kid” of the flat: “I get parented a lot. Because I do stuff like leaving the fridge door open or putting dog food in the wrong place and I’m always having to be told off.”

They tell me they are excellent at organised fun. “There is nothing I like more than an activity or a game. I’m the one making the umpteenth WhatsApp group, like, ‘Hi, anyone around today?’ ”

Does anything scare them? “So many things, constantly!” After further thought, Corrin, who isn’t keen on talking about any current partner, admits, “Heartbreak is always terrifying. There’s this moment when you get your heart broken and you think: ‘I don’t think I’ll ever be okay again.’ Yet time always passes and you always are.”

My Policeman is currently streaming on Prime Video. Lady Chatterley’s Lover is on Netflix from December 2.