Performer Emma Maye Gibson wakes up at her share house, a former inner-Sydney presbytery now dubbed The Dirty Habit, grateful to be surrounded by fellow creative, artistic housemates. Her thoughts turn to the “deep, daggy, relentless dancing” she loved doing as a kid.

Gibson dresses in a sporty Romance Was Born bralette and legging festooned with rainbow May Gibbs gumnut babies, then grabs one of her eager housemates to keep her daily 10am date on Instagram Live and gamer platform Twitch, working out for her online followers, calling instructions for them to join in. 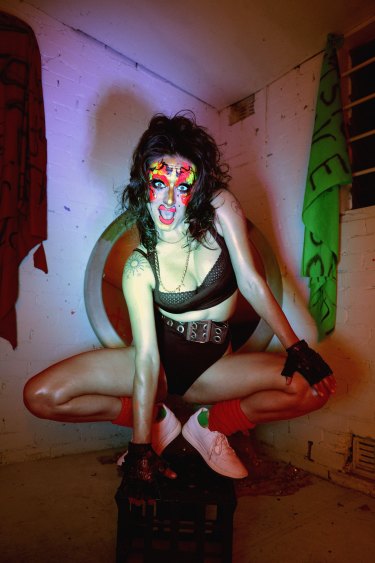 “Thank you, body,” she sings out as a mantra, advising her lockdown audience to focus on their core and soften their knees. The beats increase to Evelyn Thomas’s disco hit High Energy. “Good bodies!” she says in praise to the cool-down crooning of Spandau Ballet’s True.

This is Grumble Boogie, the aerobics show all about the “collective body”, Gibson says via Zoom after her workout, a “limb” of her performance art practice for the past decade.

Gibson’s daily online shows are partly a spiritual quest in defiance of a pandemic that has decimated the arts: in August, the Vivid Festival, including Gibson’s Betty Grumble show Enemies of Grooviness Eat Sh!t, was postponed until May 2022.

Gibson has been deepening her somatic knowledge, “how the body has intelligence, and has the ability to heal, and how breath and dance can you give you transformative energy”.

In 2020, Gibson premiered Enemies, an exploration of pleasure, grief and justice, for the queer community at the Red Rattler night club in Marrickville.

Gibson erotically pleasures herself on stage as a way of reclaiming her autonomy in the wake of physical assaults by men.

She had been set to bring the show to Eveleigh Works, a functioning blacksmith’s forge where artisans wield fire by day, surrounded by “big pussy prints” of her vulva in the large canopy space.

Her face daubed in psychedelic pink and green as the “exoskeleton or carapace” of Betty, Gibson erotically pleasures herself on stage in Enemies – not for titillation per se but as a way of reclaiming her autonomy in the wake of physical assaults by men.

Enemies is her “thank you” show to her mother, who is today a visual artist; her father, Ian, a GP in Sydney; and her brother, Timothy, an “amazing, brave inventor” in electrical engineering and science, who created the Betty Grumble logo.

“When I was very young I was watching my mother transform herself, and to also share her health with the people around her. This was happening simultaneously as my brother lost his ability to walk; he’s got spinal muscular atrophy.

“The ways in which my family handled that grief, the way my mother channelled it into her body, I’ve definitely been very inspired by.”

Her brother’s resilience in the face of physical illness has also informed Gibson’s ethos of gratitude to the body, and to consider bodies coming together on the dance floor and in a performance space – or even online – as a blessing. 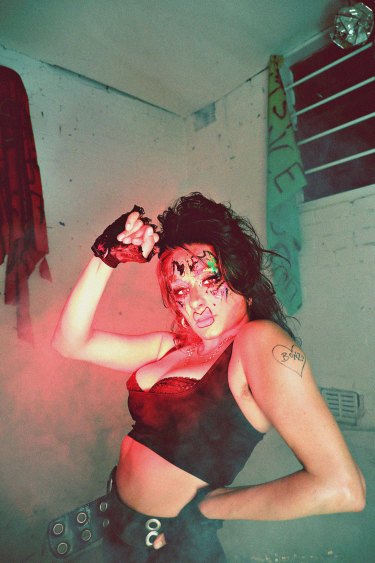 Gibson created Grumble through Sydney’s nurturing underground scene of queer parties such as Monsta Gras, Club Kooky and Loose Ends, where the dance floors, she says, are a “democratic” and “healing” space.

She borrowed from clowning, drag and strip-tease traditions to make Betty. “I wanted to say, ‘This is my body and I’m going into it with full love-energy, but if you dare disrespect my body, I will retaliate’,” she recalls.

“My artform became that retaliation, and my way of processing some of the realities of being in the world, the injustice, complexities … as a woman. I was a person who had a lot of anger, and art really gave me a way to process it, as did laughter and spectacle and satire, really.”

One of the stories she tells on stage in Enemies is of a violent ex-partner she reported to police, and the stress of subsequently being cross-examined for three hours.

“The patriarchal violence we all deal with, the systems in place tell us there’s only one way of being,” she muses. “The systems don’t educate us about being in love with our bodies and respecting our bodies, and prolificate really unhealthy power relations between different bodies.”

Gibson’s ethos has occasionally been misunderstood. “I was called a ‘woman scorned out for revenge’, and these labels or colours we get painted with dehumanise and gaslight us,” she says.

“There needs to be another way we’re speaking about [assaults] because that doesn’t benefit my ex-partner … because there’s a reason why their behaviour happened. There’s something deep in them that needs to be healed.”

With lockdown ending this weekend, online Grumble Boogie is coming to an end, although the archive can still be accessed via Instagram (@bettygrumble) or Twitch (@grumblewish).

Gibson still hopes to bring Enemies to Eveleigh Works, to create a “third space together, audience and performers”, and will announce in-person Grumble Boogies soon.

Betty Grumble will appear in Day for Night online for Liveworks, October 23.

In need of some good news? The Greater Good newsletter delivers stories to your inbox to brighten your outlook. Sign up here.