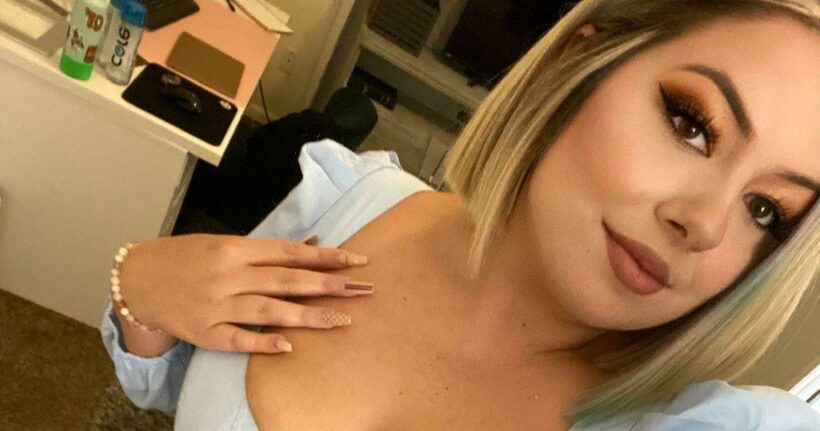 Just two years ago Meagan Starke, 31, was struggling to put food on the table for her son, 12, and daughter, 11, who have not named for privacy reasons.

She was forced to work 60+ hours a week selling pretzels in a minimum wage job.

Forced to rely on food stamps, and worried about the future, the single mum-of-two and high school drop-out knew something had to change.

When one of her TikTok followers suggested she try OnlyFans, Meagan jumped at the idea.

"I survived paycheque to paycheque with food stamps to help us get by, live used to be so hard," Meagan, who has over 350,000 followers on Instagram (@mysticbeinggg) revealed.

"After a whole day at my day job, I would even take on night shifts as a waitress in a strip club, but then I lost that job and money became very tight.

"At the time, I was staying with my mum so she could help with childcare.

"Now, I’ve completely overhauled all of our lives and it feels incredible.

“I used to only put in the smallest amount of petrol that I could afford, now I fill the tank and don’t even think about it."

The family now spend their time jetting off on luxury holidays, and enjoy going out for big meals without having to worry about the cost.

She also said that nobody in her family – such as her children, mum or her sister – ever have to worry about their bills again.

Meagan even bought her nan a new set of teeth, and paid for her medical bills.

The mum said she's "proud" to have been able to have helped her family so much.

Meagan, who grew up in Houston, Texas, fell pregnant with her son at 19 and didn't finish high school.

Two years later she had another child, and was working hard as the manager of a pretzel store to pay for her family's needs.

But the work was stressful and the hours long – often leaving the mum exhausted.

Meagan said: "There were times I would cry at the end of my shift from exhaustion.

"I missed taking my children to school, I missed all their games and concerts, I worked 60 hours a week and I still wasn’t meeting all of my bills.

"I was burnt-out from the work and the stress.

"All I ate was pretzels all day, I felt like I looked old and tired."

Even though she said she was "shy" at first, so many people complimented her on her figure, and it really encouraged her to move forward.

"I’d always had a big voluptuous butt, and got a lot of comments about it before OnlyFans," she added.

"So I thought why not use it to make some money on the side."

Meagan made $20,000 (£16,586) in her first month on the site and one month later quit her job at the pretzel shop to become a content creator full-time.

Now she can live the life she's always dreamed of, and she's currently building a five-bedroom mansion with a pool for herself and her kids.

Her mum and sister have also moved in with her.

She said: "My mum was disapproving and hesitant at first, but once she saw how much it improved our life she warmed up to it.

“I struggled for so long and saw my family struggle that I just want to provide for us and enjoy life.

"Now I am in charge of my own time and I never miss a football game, and I pick my kids up from school every day.

“I love my work, especially getting to dress up and play a character online.

"And I’ll never have to eat pretzels ever again."