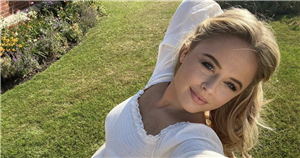 It is understood that Jack has denied the claims that he’s romantically involved with Emily, and insisted to Sasha that the pair are just friends.

Sasha, 25, is said to be "devastated" over the alleged dates between Jack and Emily, but according to a source close to the footballer, Jack still plans on meeting up with the actor who he’s “intoxicated” by.

The source said: “Sasha has been rocked by news of Jack’s secret friendship. She had no idea.

They continued to tell told The Sun: “Jack has apologised to her for any upset caused, and they were due to meet to discuss their future.

“Jack is really confused. On the one hand, he’s being advised to stay loyal to his childhood sweetheart for all sorts of reasons — commercial and otherwise.

“But on the other, he’s intoxicated by Emily’s company. He can’t seem to stay away from her."

Here's a look at who Emily has dated in the past…

The presenter was reported to have a new man on the scene earlier this year.

The former Inbetweeners star was said to be dating Charlie Edwards, 21, who is ten years her junior.

Charlie is both a model and a tattoo artist, who creates intricate deigns for The Raven’s Retreat tattoo parlour.

Sources revealed to The Sun that Emily was wooed by Charlie on Instagram.

They told the paper that: “Emily seems totally taken with Charlie and he's really into her. They met through a mutual friend.”

When Inbetweeners actress Emily set eyes on Harry Styles he was on The X Factor in 2010, and she tweeted at the time: “Does Harry from One Direction HAVE to be 16?!

“Let’s pretend he’s 18 at least! Then there’d be only One Direction he’d be going – to the bedroom!”

Fast-forward two years and Emily and Harry were rumoured to be dating and she said in August 2013: “Yeah, we had a short-lived thing. But we were never boyfriend and girlfriend.

“Harry and I had fun, then went in opposite directions. We haven’t spoken in a while.”

Emily and former boyfriend Jack Vacher dated for five years before separating in 2018.

Following their split, I’m A Celebrity star Emily candidly told Noel Edmonds while in the famous camp that she’d had a “really difficult start to the year.”

She continued: “I went through a break up. Five years I was with somebody. I got into a habit of thinking I needed that security. That I needed that love and acceptance from a guy to make me happy. For me this has been very daunting."

A source told the Daily Star at the time: “Emily is far from single. It’s probably the worst kept secret around where they live – they’re always together.

"They have loads of mutual friends and met a few times over the years but there has always been a lot of chemistry between them.

"When they met this summer they realised how much they liked each other and started dating.

"So far it’s going really well. They’re both really fun and have a great sense of humour. They make a brilliant couple."

However Emily went on to deny the claims and her representative said the pair were “friends but nothing more.”

Emily split from her boyfriend Rob Jowers after six months of dating in September 2019.

The pair reportedly went their separate ways after realising they wanted different things on a holiday with her family.

A source told The Sun Online at the time: "Emily and Rob were enjoying a honeymoon phase in their relationship with lots of fancy dates and extravagant weekends abroad.

"But when the dust settled they realised it just wasn’t right. The split was mutual and they are both really sad about it and remain friends.

"Emily’s enjoying one of the busiest times in her career so wants to give all she can to the exciting work opportunities coming her way. She’s throwing herself into upcoming projects and remains positive."

Shortly after her split, Emily opened up to OK! about her chequered love life and romantic history.

“Luckily I’ve got so many amazing things happening in my life to distract me from the fact that I’m incredibly sad. But I know the drill and I’ve got over boys before.”

“Heartbreak gets harder to deal with as you get older as you pin your hopes on things. I so wanted this to be my happy ending.”

Back in August, after Emily had moved into a trendy new home, she was reportedly dating Misguided social media exec Joe Caro, according to The Sun, and the pair were spotted out on a walk.

“It’s early days between the pair but Emily loves how laid-back Cornishman Joe is,” The Sun’s source revealed, continuing: “They share the same sense of humour and are both chilled out.

"She’s super-busy with her career at the moment so is more than happy to take it slowly.”