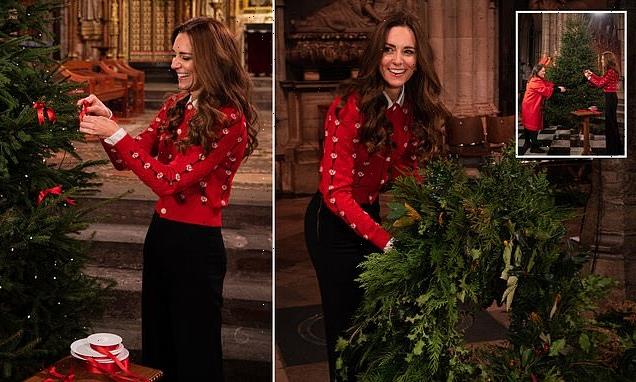 The decorating duchess! Kate Middleton adorns the Queen’s Christmas trees with red ribbon bows as she prepares for her Westminster Abbey carol service in unseen photos – and says ‘bleak time’ in pandemic ‘made us realise how much we need each other’

Small acts of kindness can bring comfort and relief in the bleakest of times, the Duchess of Cambridge has said, and ‘made us realise how much we need each other’ during the pandemic.

Kate’s message of hope comes in a special introduction to her Royal Carols: Together At Christmas one-hour television special which will be broadcast on ITV on Christmas Eve at 7.30pm.

New images show her at Westminster Abbey the day before the filming of her carol service, decorating trees sent by the Queen from her Windsor Great Park estate with red ribbon bows.

In the photographs, the mother-of-three, 39, sports a festive red £1,350 cardigan with a white collar from her favourite brand Miu Miu, teamed with black trousers, while opting for a natural make-up look.

Kate devised the service – which proved to be a family affair with several members of the royal family attending – to thank those who have gone above and beyond to support people during the pandemic – and celebrate the small but never insignificant acts of kindness that have been witness across the nation over the last two years.

It has been developed with BBC Studios Events Productions but will be broadcast on ITV. Prince William and Kate reportedly dropped the BBC as the broadcaster for their Christmas special in the wake of the two-part series The Princes and the Press, which was criticised by the Queen, Prince Charles and the Duke and Duchess of Cambridge for giving credibility to ‘overblown and unfounded claims’ about the Royal Family. 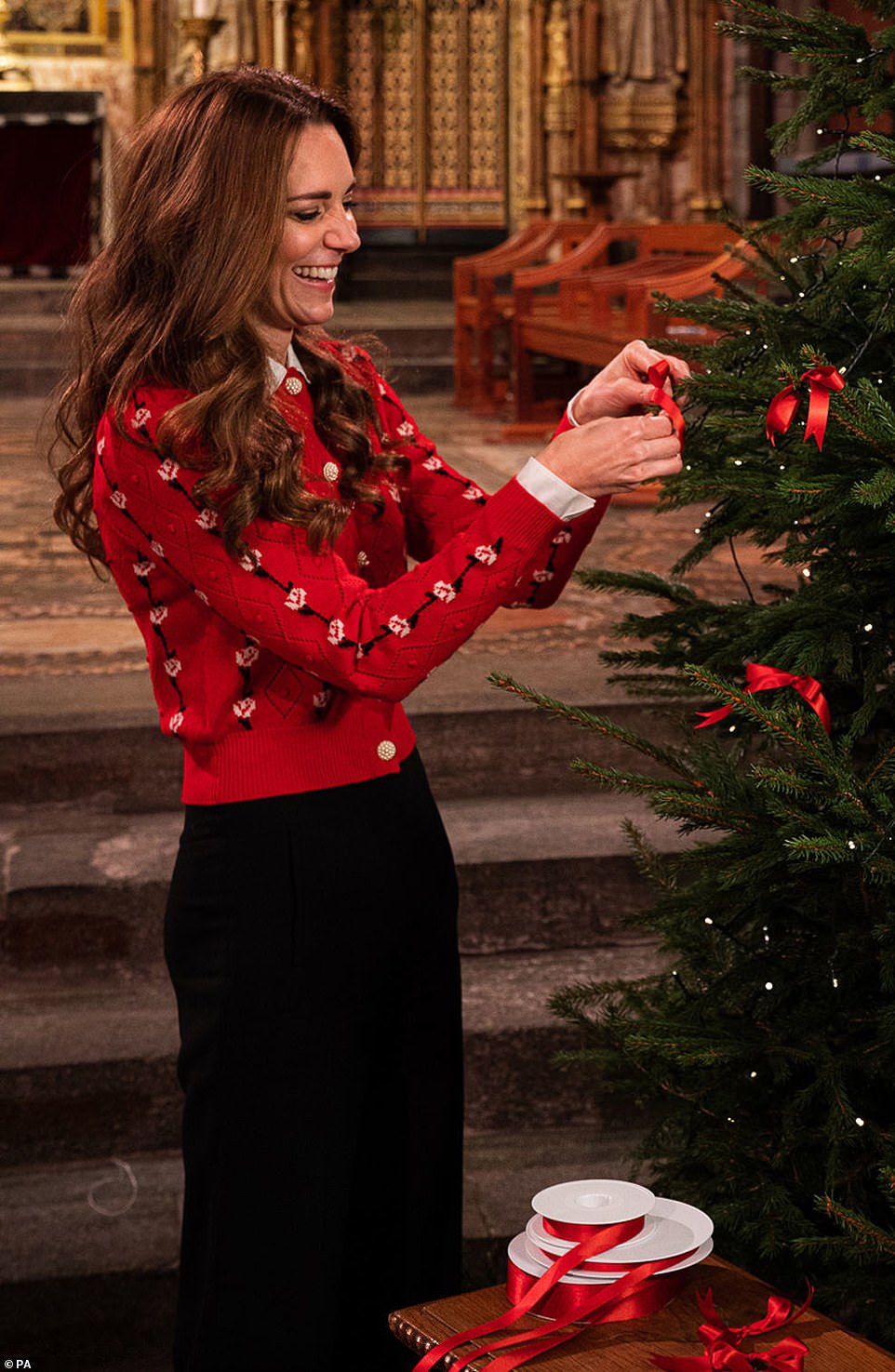 New images show Kate (pictured) at Westminster Abbey the day before the filming of her carol service, decorating trees sent by the Queen from her Windsor Great Park estate with red ribbon bows 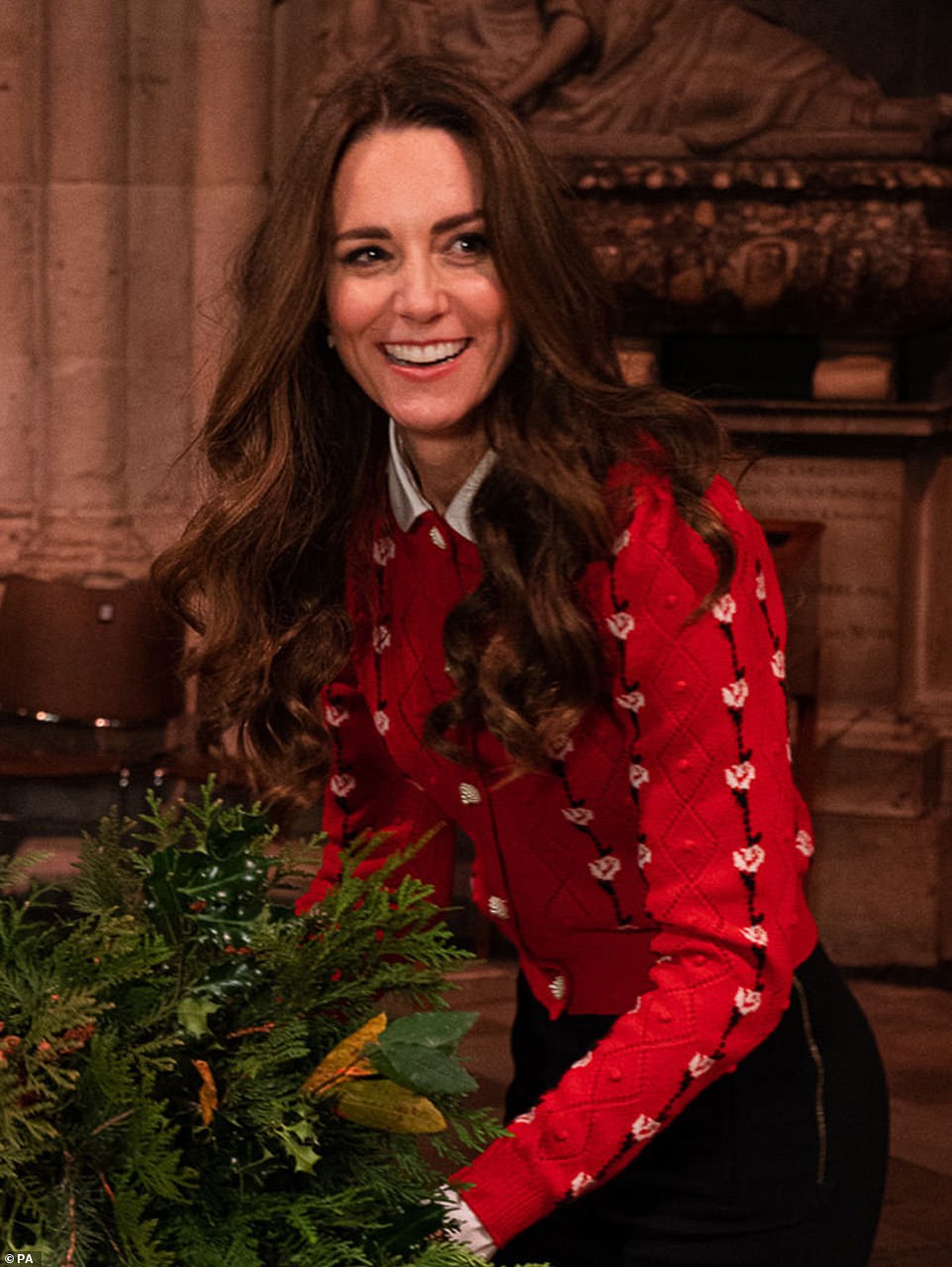 In the photographs, the mother-of-three (pictured), 39, sports a festive red £1,350 cardigan with a white collar from her favourite brand Miu Miu, teamed with black trousers, while opting for a natural make-up look 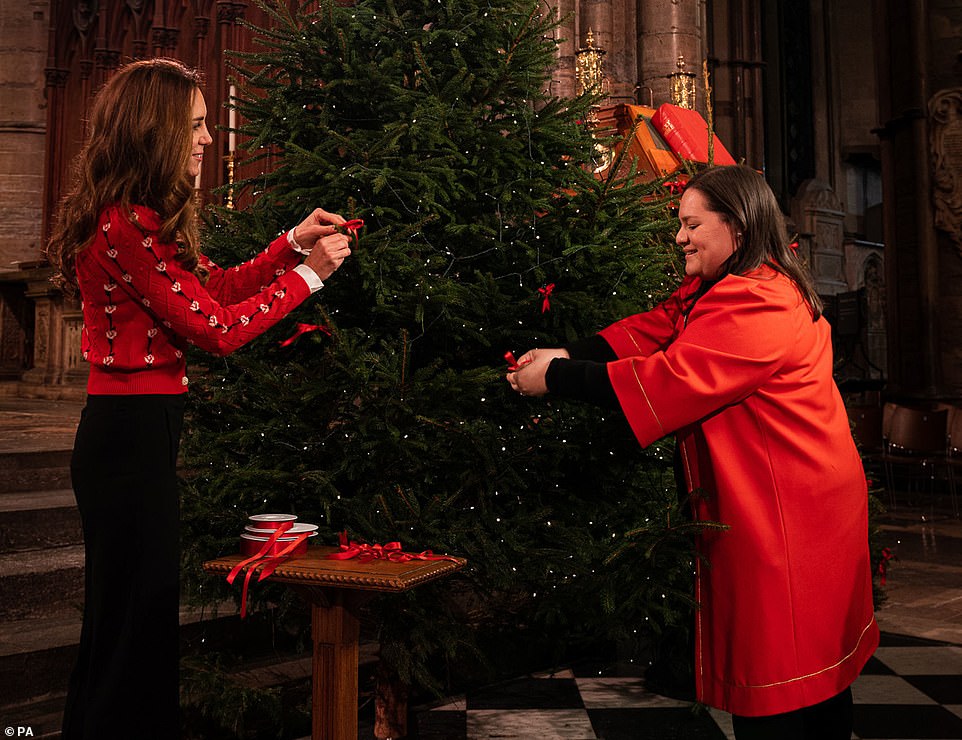 Kate’s service was filmed for Royal Carols: Together At Christmas, a one-hour television special which will be broadcast on ITV on Christmas Eve at 7.30pm. Pictured, the Duchess of Cambridge (left) and Abbey Marshal Leticia Cachoeira Edwards, decorating a Christmas tree at Westminster Abbey

In her recorded introduction message the Duchess reveals she chose Westminster Abbey for the service because ‘it’s a place that’s really special to William and me’. The couple married there in 2011.

Kate and Prince William, both 39, were joined at the service by a host of royal family members, including the Countess of Wessex, 55, Princess Beatrice, 33, and her husband Edoardo Mapelli Mozzi, Princess Eugenie, 31, and Zara and Mike Tindall.

The Duchess’ parents Carole and Michael Middleton, as well as her siblings James and Pippa, were also in attendance at the event.

In her introduction, Kate says: ‘We wanted to say a huge thank you to all those amazing people out there who have supported their communities. We also wanted to recognise those whose struggles perhaps have been less visible too.

‘We have been through such a bleak time. We’ve seen so many challenges. We’ve lost our loved ones. We’ve seen our frontline workers under immense pressure. And also we’ve been more emotionally and socially distanced and isolated from each other.

‘But I suppose through that separation, we’ve also realised how much we need each other and how acts of kindness and love can really bring us comfort and relief in times of distress. 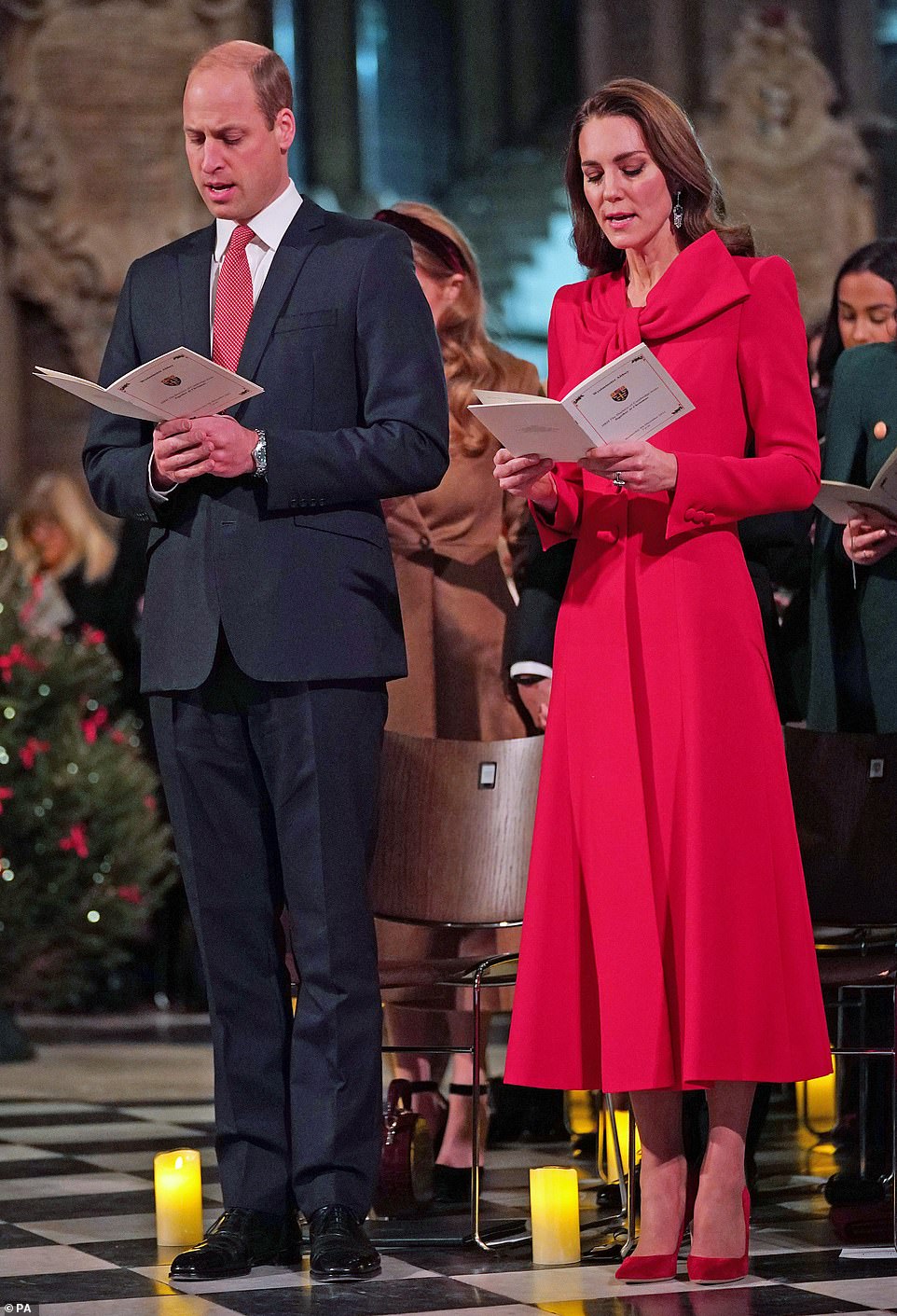 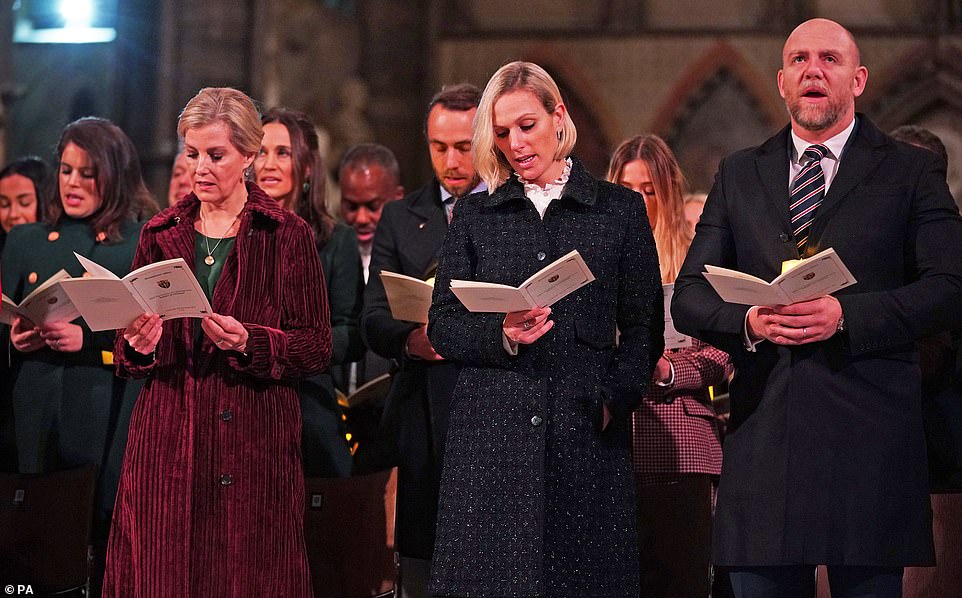 The royals (pictured) appeared to be in deep concentration as they sang along to the festive tunes in photographs taken during the one-hour festive special, Royal Carols: Together at Christmas, which will be broadcast on ITV on Christmas Eve 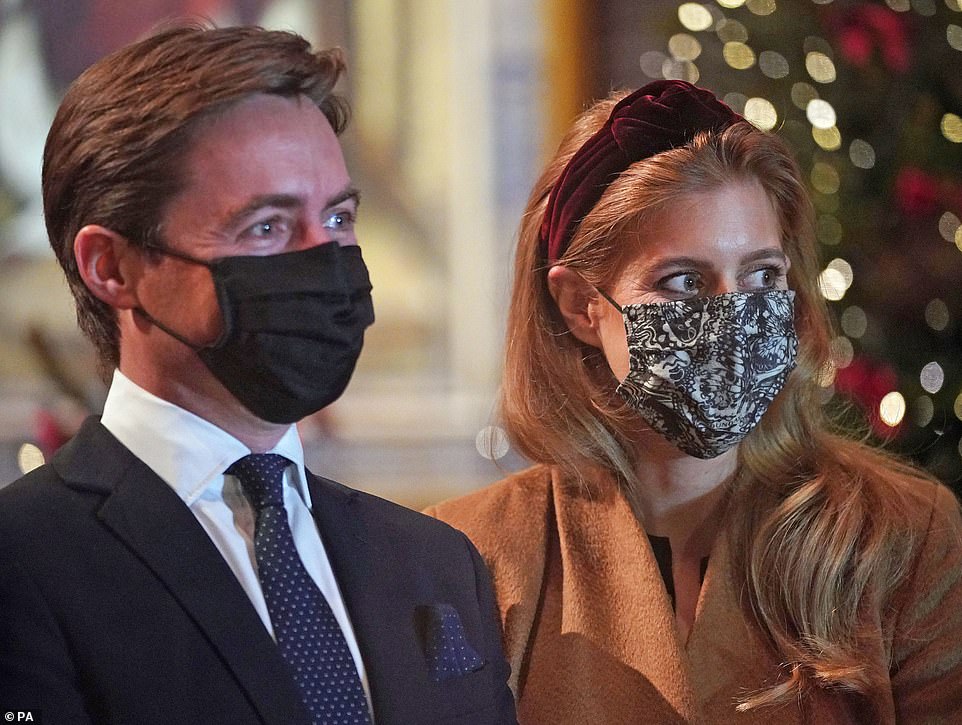 They were joined by a host of royal family members, including the Countess of Wessex, 55, Princess Beatrice, 33, and her husband Edoardo Mapelli Mozzi (pictured), Princess Eugenie, 31, and Zara and Mike Tindall.

The Together At Christmas carol service was attended by ‘unsung heroes’ from across the UK in recognition of their ‘inspirational’ efforts to protect and care for those around them.

Nominations were drawn from local Lieutenancies, community networks, charitable organisations and patronages of Her Majesty The Queen, The Prince of Wales and The Duchess of Cornwall, and The Duke and Duchess of Cambridge.

Individuals who The Duke and Duchess met and spent time with during their recent engagements and project work were also present, alongside armed forces personnel who were involved in Operation Pitting – airlifting families out of Kabul – young carers and faith leaders.

‘We owe them a huge debt of gratitude for all they’ve done in bringing people together and supporting their communities,’ Kate added. 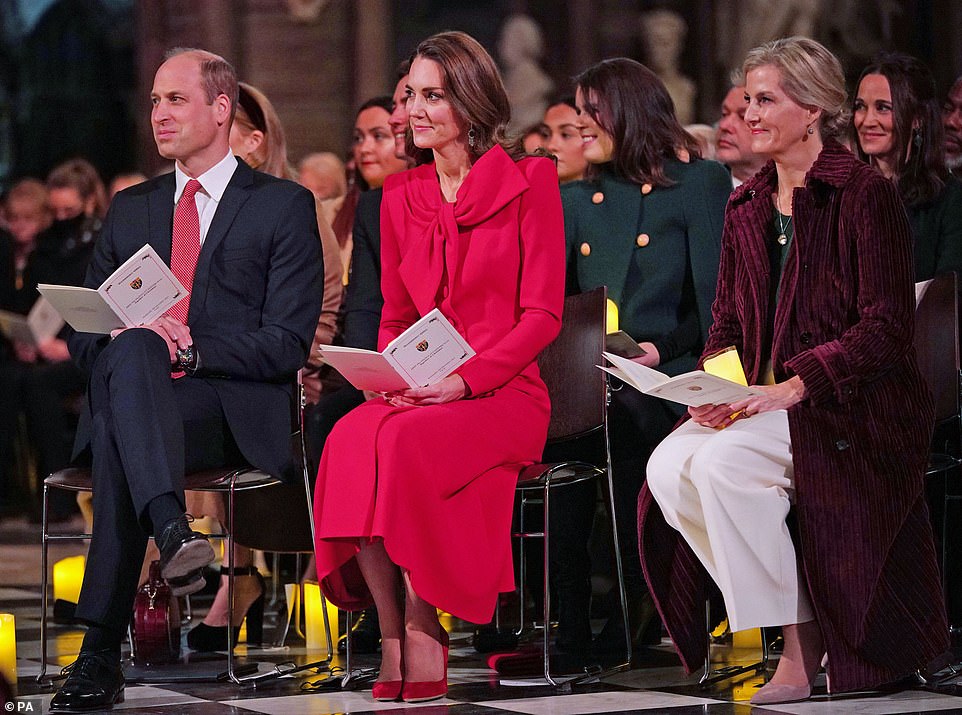 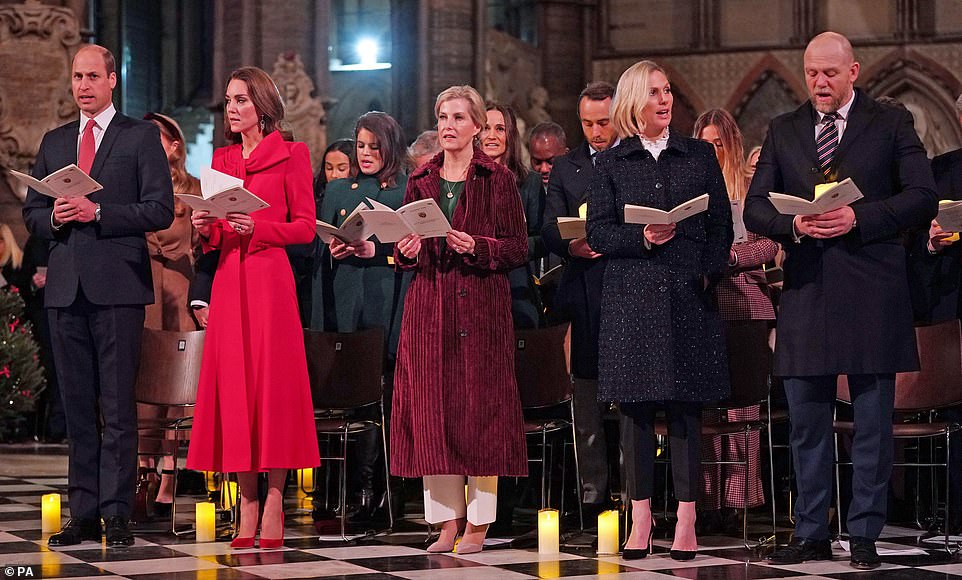 The service (pictured) celebrates the ‘incredible work’ of pandemic heroes including charity workers, teachers and volunteers 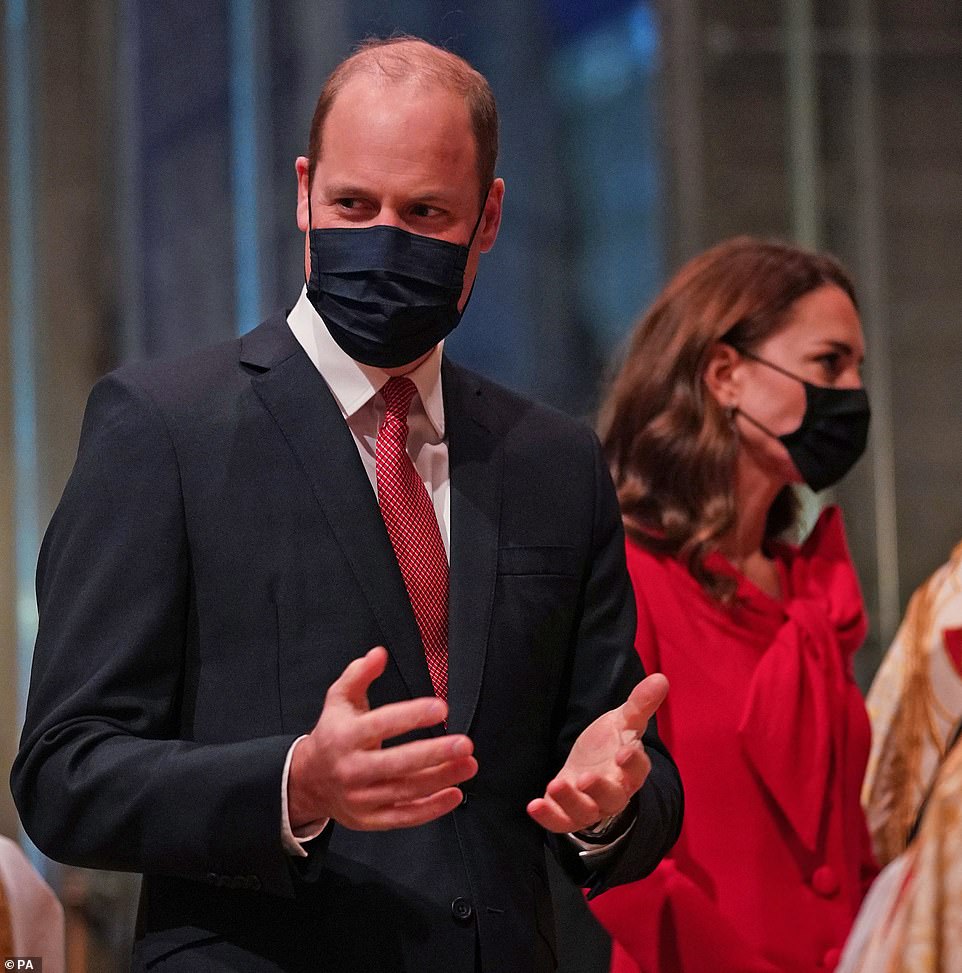 Kate’s coat dress (pictured right), thought to be worth around £3,000, is a new ensemble for the Duchess, who previously wore a black version of the garment to attend Prince Philip’s funeral in April 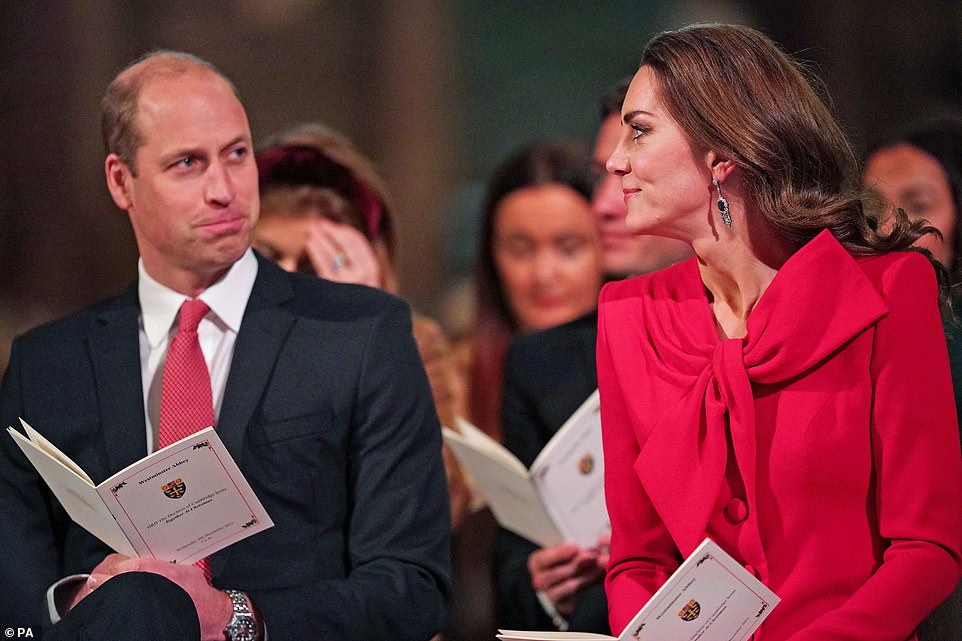 Meanwhile the royal (pictured right) added a touch of glamour to her outfit with the Queen Mother’s sapphire and diamond fringe earrings, and recycled her £640 red suede bag by Miu Miu for the occasion, first worn in September 2016

Introducing star performers including Ellie Goulding, Leona Lewis, Tom Walker and the Westminster Abbey choir, Kate added that music had been ‘so important to me during the pandemic as I think it was to so many people too’.

‘But above all it’s about celebrating the goodwill, the acts of kindness, love, empathy, and compassion to help people come through these difficult times,’ she added.

The service also incorporates readings delivered by The Duke of Cambridge, British Paralympian and junior doctor Kim Daybell, actor Tom Felton, and presenter Kate Garraway, in addition to a performance of To The Day, a poignant composition written for the service by poet and writer Lemn Sissay.

The Duchess’ message was recorded on December 7 during a visit to the abbey to help with preparations, including decorating Christmas trees donated by Her Majesty The Queen from Windsor Great Park and arranging wreaths donated by the Royal Horticultural Society.

The Together At Christmas carol service was developed and delivered in partnership with Westminster Abbey and BBC Studios Events Productions and will be broadcast on Christmas Eve on ITV at 7.30pm